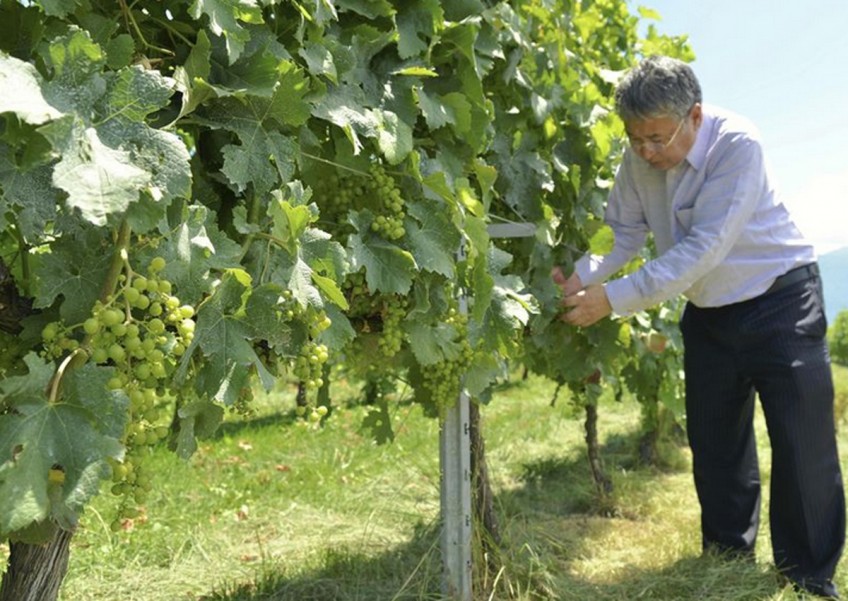 The National Tax Agency is preparing to establish a new rule that will require wine labelled as Japanese wine to be wholly produced in Japan using domestically harvested grapes.

The agency plans to finalize the new standard as early as this autumn and enforce it in two years after publicizing it.

Even though about 75 per cent of grapes or concentrated grape juice used to make Japanese wine are imported, such wine is considered to be domestically produced. Wineries that use only domestically harvested grapes welcome the new standard as they believe it will promote Japanese wines.

"The government's establishment of a fair rule, will enhance the credibility of Japanese wine," said Shigekazu Misawa, 66, president of Chuo Budoshu Co. (Grace Wine) in Koshu, Yamanashi Prefecture, at the company's vineyard in Hokuto in the prefecture.

Established in 1923, the winery has since been making wine with only domestically harvested grapes, with the exception of one brief period. It produces 200,000 bottles of wine annually and exports to Britain and 19 other countries. Some of the company's wines have won awards at international wine competitions. Misawa said: "Japanese wines are not well-known overseas. Although there are many problems to solve, establishing the standard is a great step to improve the situation."

In Bankan, a wine bar in Nakano Ward, Tokyo, about 300 kinds of Japanese wine are available. Hidero Yashiki, 36, the sommelier-cum-bar manager, said: "I expect that [establishment of the standard] will improve the value of our business."

According to the tax agency, the trading volume of domestic and imported wine in Japan was 365,000 kiloliters in fiscal 2013, up for the seventh consecutive year. The 2013 figure is the second largest on record following the 369,000 kiloliters traded in fiscal 1998, when a red wine boom occurred, a sign that wines are penetrating general households.

In Europe, where wine culture has a long history, laws require labels to show the varieties and production areas of grapes. In contrast, Japan's liquor tax law has no such stipulation.

Although the Japan Wineries Association and other groups have set up a guideline that suggests specifying on labels whether materials from overseas are used, it is not binding.

A National Tax Agency official said, "It [the new standard] will make it easier for consumers to distinguish these wines and also help winemakers promote their products overseas."

But some wine producers have expressed concerns over the new rule.

A tax agency survey shows that between 30 per cent and 90 per cent of the materials for wines produced by midsize and major winemakers in Japan are imported in the form of grapes and concentrated grape juice among other things. It is believed that wineries import these materials partly to ensure a steady supply of wine to the domestic market.

An official in charge at a winemaker in northern Japan is worried about the new standard, saying, "I wonder if [the new standard] will mislead consumers into thinking that wines using materials from overseas are inferior to Japanese wines [wholly produced in Japan]."

Another problem is securing domestically harvested grapes when the production of Japanese wines increases. A winemaker in Yamanashi Prefecture said: "The production volume of grapes is declining as it is difficult for grape farmers to find successors. I wonder if they will be able to have a steady harvest, which is also heavily influenced by weather."

If wine producers violate the rule, local tax office heads will instruct or order them to comply. Wineries that do not comply will face a penalty of up to 500,000 yen (S$5,800) under the liquor business associations law, and in the worst case, may lose their production licenses.

A grape's production area is an important element for evaluating wines. Under the new rule, 85 per cent of domestic grapes used in domestically produced wine must be harvested in the same area to designate that area on the label. Labels will also have to specify if the locations of the grape production area and winery differ.