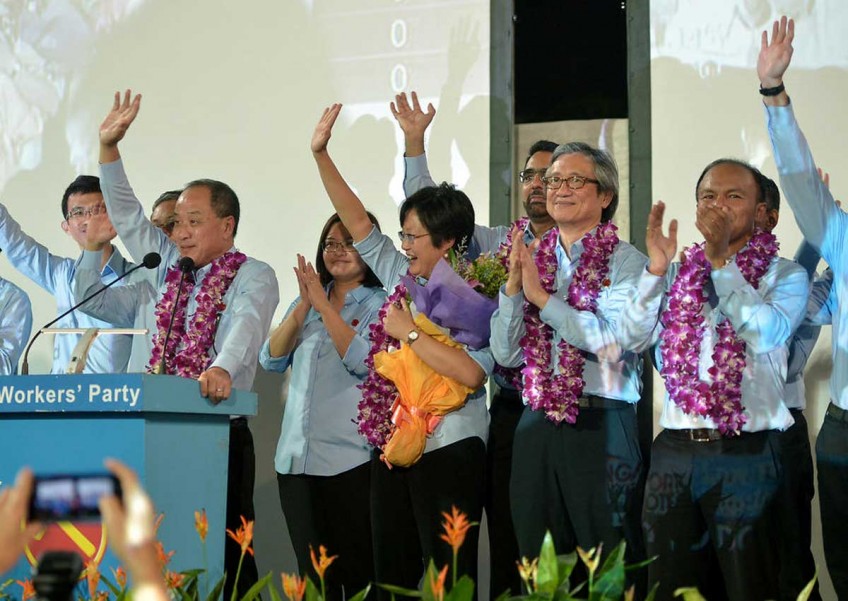 It is back to the drawing board for a stunned Workers' Party (WP) after an election result that saw it tread water rather than grow into a more powerful opposition presence.

The ballot box drubbing means it will not be able to fight the next election from a position of strength, and also has wider implications for its leadership renewal.

The WP was counting on getting at least a combined five more MPs elected in East Coast GRC and Fengshan SMC, and party chairman Sylvia Lim told a campaign rally the WP placed its best up-and-coming candidates in these seats "to reinforce and renew the ranks of our party in Parliament".

With party chief Low Thia Khiang having held his post for 14 years, and Ms Lim having held hers for 12 years, there is a growing urgency for the party to renew its leadership ranks.

Ms Lim told The Straits Times last month there was a feeder group of members to choose from, but the WP had "not fixed our mind on any particular person taking over as yet" for its top posts.

While she and Mr Low can indicate their preferred successors, it is up to party cadres to make the decision at a party conference held every two years to elect its central executive council, she added.

Will the change in the party's fortunes hit Mr Low's popularity within the WP? How will this affect those earmarked as potential leaders? The next party election - due next year - will be one to watch.

Since taking over the reins, Mr Low and Ms Lim have not faced any contest during these party elections. But party sources say the disappointing performance at the Sept 11 polls could spark a challenge.

Already, there are rumblings of discontent among some segments of the party over the leadership's apparent preference for newer faces. This election, the party fielded 16 new faces, most of whom joined the party after its electoral victory in Aljunied GRC in 2011.

A party insider, though, said Mr Low still has an edge over his closest competitors - that is, if any exists. Since becoming party chief in 2001, he has presided over more than a decade of steady progress for the WP and shaped it into Singapore's most credible opposition party today.

Opposition watcher Wong Wee Nam reckons the WP would more likely band together in this "time of crisis". The top two posts aside, the other spots in the party's top decision-making body are typically hotly contested. At the last party conference in July last year, more than 20 vied for the other 12 spots on the central executive council.

By all accounts, the WP had been looking to its candidates in East Coast and Fengshan to fill some positions, and eventually key party posts.

Although the WP did not win East Coast and Fengshan constituencies - polling 39.27 per cent of valid votes in the former and 42.48 per cent in the latter - the results were good enough to secure the consolation prize of Non-Constituency MP (NCMP) seats, given to the best-losing candidates.

The seats will go to shipping law firm partner Dennis Tan, who stood in Fengshan, and consultancy firm chief executive Leon Perera, who was nominated by his East Coast teammates. This decision was approved by the party's leadership.

The party is also keen for sociology professor Daniel Goh, who was part of the East Coast slate, to take up the NCMP seat turned down by Punggol East candidate Lee Li Lian, but it is up to Parliament whether to fill the position. Mr Tan has risen quickly through the ranks to a central executive council position since volunteering for the party in 2011. Dr Goh, too, is in the council. The duo, together with Mr Perera, were the key architects of the WP's election manifesto. The fact that they have been picked to fill the NCMP seats is further indication of their party leadership potential.

With only three NCMP seats, leader of the East Coast team Gerald Giam will not be returning to Parliament after serving one term as NCMP. But all signs point to him still being in the running for key party posts. He played a significant role in policy formulation over the years and chaired the presentation of the party manifesto. That he was trusted to front a press conference without either Mr Low or Ms Lim present speaks volumes about his stature in the party.

At his first Meet-the-People session since the elections, Mr Low confirmed the high hopes the party had placed in its East Coast and Fengshan candidates.

"They are the future leadership core of the WP. We very much hoped they could be elected," he said. "Now that they are not elected, the second-best option would be to become NCMPs so more Singaporeans will know them better."