No go for Saints' tradition this year 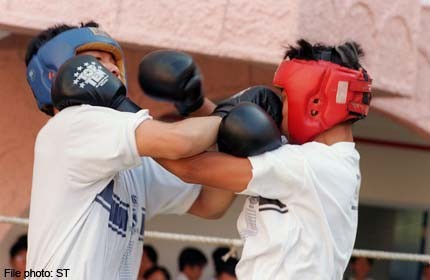 SINGAPORE - It has been a longstanding tradition at St Andrew's Secondary School to hold boxing matches involving students as part of its celebrations in the lead-up to National Day.

But this year's tournament has been called off by principal Lucy Toh, sparking an outcry among former students, who typically show up to watch the matches.

On The St Andrew's Family Facebook page for alumni, Mrs Toh explained last Thursday that the decision was made "because consent forms were not submitted on time".

She said that "it is a little unnerving to (me) to put people into the ring who do not have the discipline outside the ring to get the necessary consent from their parents". She noted in the same post that she would not put a stop to the boxing matches entirely.

While her statement reassured some, others took it negatively.

On Wednesday, former student Jonathan Silas posted on the same Facebook page: "It is very clear that (Mrs Toh) does not understand the history of boxing at Saint's."

He claimed he had written to her, and many others said they would follow suit.

Businessman Roy Frederick, a former student who turns 48 today, told My Paper: "As a National Day baby, the boxing matches were always a birthday treat for me."

Mr Frederick noted that the tournaments have been an integral part of St Andrew's students' lives. He said: "It is important to have an identity in school culture, as it builds camaraderie among students."

He added that the annual tournament's main draw was the bouts involving upper-secondary students.

The boxing matches were held in an authentic boxing ring set up in school, with professional referees and commentators, according to Mr Syafiq Sng, 19, another former student.

He said: "Students who were interested to participate in these matches...could ask the teacher-in-charge where training sessions would be organised."

Mr Sng, who is now studying in a junior college, added that students must get their parents' permission to take part.

My Paper understands that a group of former students met Mrs Toh at the school, situated in Potong Pasir, on Monday. It was proposed that a talk on the history of boxing, followed by a boxing demonstration, be held instead.

Responding to My Paper's inquiries, Mrs Toh said via e-mail on Wednesday: "The school had given due consideration to the students' safety and decided to replace (the tournament) with a boxing demonstration."

The talk and demonstration were held on Wednesday, and involved well-known Singapore boxing coach Syed Kadir Abdul, 65. It is unclear how many former students attended the event.

Of the event, Mr Liang Sea Fong, the school's communication liaison officer and head of department for English Language, told My Paper: "It was an educational...experience for current Saints on boxing: Its history, its value as a sport and the commitment that one must put in to be a good boxer."