No new eateries allowed in 7 areas 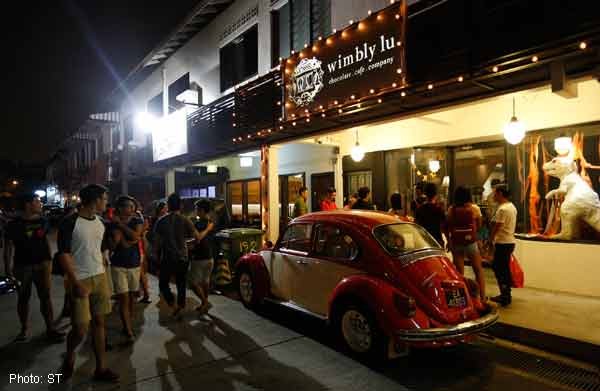 Just off Upper Serangoon Road, it also has five eateries which have become so popular that parking and traffic have become something of a nightmare.

The Urban Redevelopment Authority (URA) has banned additional restaurants from setting up shop there - to prevent parking problems from worsening.

The area is one of seven new spots that the URA, working with the Land Transport Authority, placed on its list last Tuesday.

The others are Sembawang Road (from Mandai Road to Transit Road); parts of Changi Road, including Jalan Eunos; Upper Paya Lebar Road; Bukit Timah Road; Kampong Glam; and Kampong Bahru Road/Spottiswoode Park Road. This brings the number of areas on the list to 18.

URA started the list in 2002 with eight areas. It focuses on shophouses with eateries that lack parking space. Over the years, new neighbourhoods have been added, while some were taken off the list when the situation improved.

Under the rules, existing eateries can carry on if there are no complaints. But new food businesses can move in only if they take over the space from another.

When The Sunday Times visited Jalan Riang last night, valet drivers and traffic marshals - employed by the cafes and restaurants on the stretch - were on hand to ease the congestion.

But still, cars were parked illegally along roads with double-yellow lines.

"It gets very crowded and sometimes the residents complain," he said, adding that the valets park between 10 and 15 cars on the weekends when the service is available.

Businesses there, such as cafes Wimbly Lu and Rokeby, have also come together to provide traffic marshals on Fridays and weekend evenings. "We're doing what we can on our part to ease the congestion," said Rokeby owner Kelvin Lim.

Meanwhile, cafe patrons were disappointed that new food and beverage options would not be appearing.

Said undergraduate Joel Sim, 22: "It's rather disappointing. It would be nice to have another cafe around here to go to.

"But it's understandable. I guess the ban is in place because they have to keep the situation under control."

This article was first published on Oct 12, 2014.
Get a copy of The Straits Times or go to straitstimes.com for more stories.