No safety in numbers for Malaysian-Chinese voters 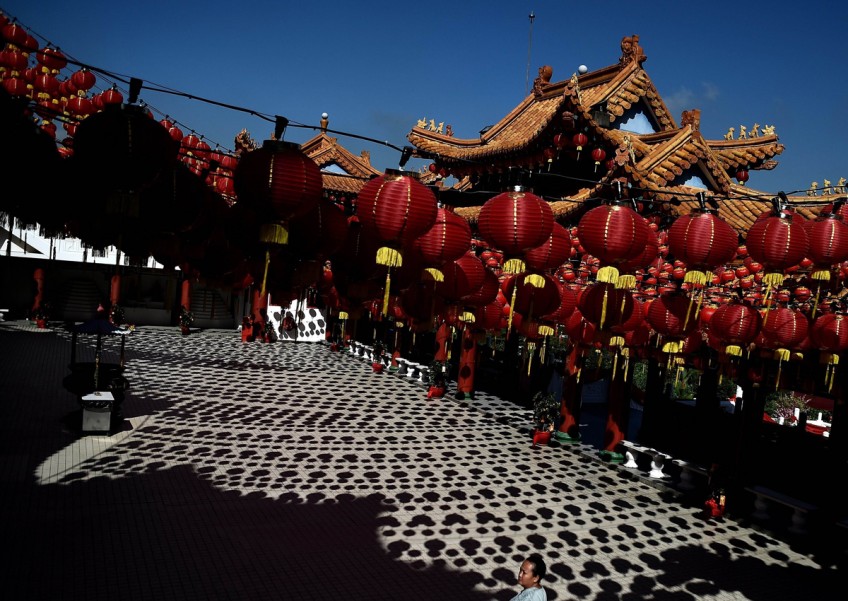 A women walks under traditional Chinese lanterns decorated at the Thean Hou temple ahead of Lunar New Year of the monkey celebrations in Kuala Lumpur. The Chinese form only 22 per cent of Malaysia's population, and their falling birth rate will mean a smaller political voice.
AFP

This is the time of year when the colour red invades Kuala Lumpur's downtown - red lanterns everywhere and a Chinese New Year mood in the air.

It is a reminder of the urban Chinese dominance in terms of population, economic clout and purchasing power.

But appearances can be deceptive. The Chinese population is shrinking because the Chinese birth rate is far below the replacement rate.

To put it in layman terms, it takes two to tango and for the community to expand, each couple needs to have more than two babies. However, the Chinese are having only 1.6 babies per couple.

Universiti Malaya demographer Syed Razak Syed Mahadi said the 1.2 percentage point drop over 14 years is "drastic" and says a lot about the socio-economic priorities of the community.

Some politically minded analysts have tried to attribute it to the Chinese concern about democracy and human rights in the country.

But Dr Syed Razak said having babies, especially for a pragmatic community like the Chinese, is all about "costing".

"It has little to do with politics. Late marriages, education, cost of living and changing attitudes are some of the major factors for smaller families.

"Even the cost of getting married is a factor. I asked my PhD student when he is going to get married, he said he could not afford it yet because Chinese wedding dinners are very costly. It's really about dollars and cents."

Bumiputra growth rates have also slowed down but the community is still growing at almost twice the rate of the Chinese.

The Chinese vernacular papers have gone to town with the demographic statistics.

The issue has also set off alarms bells in some quarters.

The most immediate concern, said Sin Chew Daily columnist Tay Tian Yan, would be the impact on Chinese schools.

Year One enrolment in Chinese schools used to be above 10,000 each year but has steadily declined. The enrolment this year was only about 7,000-plus.

In the Federal Territory alone, Chinese primary school enrolment has dropped about 26 per cent between 2003 and last year.

Dwindling intakes would eat into the raison d'etre of Chinese schools, although it will not necessarily mean that Chinese education will become any less emotive or political.

However, a dwindling Chinese population will definitely mean a smaller political voice for the Chinese.

"Democracy is about numbers, so is politics. The shrinking Chinese numbers is a matter of concern and all political parties will have to take stock," said Selangor Democratic Action Party (DAP) vice-chairman and state exco member Teng Chang Khim.

Malaysia's population is now 30.1 million, of whom the Chinese form only 22 per cent.

Malays make up 50 per cent of the population and given their higher growth rate, they will be even more dominant in the years to come.

The Chinese vote powered the big electoral wins by the opposition in 2008 and 2013.

"It was like a middle-class uprising that swept through the urban centres and spread right down to Johor," said lawyer and former think-tank chief Khaw Veon Szu.

Some claimed 95 per cent of Chinese voted against Barisan Nasional in 2013, others put it at 85 per cent.

The vote gave the Chinese an incredible sense of power, a feeling that the force was with them and that they could change the government.

Every Tom, Dick and Harry says the Chinese sentiment has not shifted much. The community is still dead against Umno and still believe that the DAP best represents their thinking and needs as a community.

"I can't see any reversal in trend. It's been worsened by issues like the goods and services tax, 1MDB and the economy," said Mr Khaw.

But there are only 38 out of 222 parliamentary seats where the Chinese form the majority of voters. The opposition has won all these seats - 35 by DAP and three by Parti Keadilan Rakyat.

DAP has reached a plateau on the Chinese vote and it needs Malay faces to contest the Malay seats if they are to increase their seat count, hence, its ongoing Malay recruitment drive.

"In our last party retreat, there was a lot of discussion on how to make the party more multi-racial so that we can attract voters across the board.

"Reaching out to the Malays is not just about championing Malay issues, it's also about understanding their culture," said Mr Teng.

The last two general elections were all about the Chinese voters.

But the next election is going to be about the Malay vote.

The signs are that the Malay vote will consolidate behind the two main Malay parties, Umno and Parti Islam SeMalaysia (PAS).

"The Chinese are unhappy with the system. They thought that by removing the Malaysian Chinese Association, they could remove Umno.

"Instead, they strengthened Umno. They bought into the DAP sales pitch that PAS is for all," said Ti Lian Ker, chairman of MCA's Religious Harmony bureau.

A similar pattern is unfolding in Sarawak, where the urban Chinese seats swung to DAP in the last state election. It rattled the Barisan state government like never before but could not shake its hold on power.

However, it gave the Chinese a lot of satisfaction, they felt syiok (thrilled) that they could punish the ruling coalition through the ballot box.

But the Chinese in Sarawak are facing the same numbers dilemma as their counterparts in the peninsula. Without the bumiputra support, they have reached a political cul-de-sac.

Mr Najib, in his presidential address, spoke about how Malays form the majority in the country and that Umno would remain in power. The implicit message was that even if the non-Malays do not come along with Barisan, Umno and PAS will have the numbers.

In fact, the thinking in Umno circles goes something like this: The Prime Minister bent over backwards for the Chinese but they rejected his overtures. We can survive without you, let's see if you can make it without us.

It is not a progressive outlook but that is the way things are at this point in time.

The research firm PoliTweet has reported that the higher Malay growth rate means that the number of Malay seats will increase with time.

"The shift is already taking place. Parties and politicians who rely on the non-Malay votes will face difficulty unless they change their strategy," said the report.

Parties like MCA, DAP and Gerakan will need to restrategise and rebrand unless they want to continue fishing in a depleting pond.

The number of Malay-majority seats also far outnumber the seats dominated by the non-Malays.

It is a numbers game especially when it comes to the ballot box. The Chinese will always be the supporting actor in a movie where the Malays play the starring role.

"The Chinese are not stupid, they realise that the numbers game is against them. How else do you explain the fact that they are at the height of their political clout, yet they feel so insecure about the future," said Mr Khaw.

It has often been said that the opposition coalition has done a fantastic job of tapping into Chinese resentment against the government and fanning it into a massive hate campaign against Umno.

At the same time, they have been selling the Chinese electorate a dream of power. Many Chinese are still carrying that dream of toppling the Barisan and ushering into power a coalition where the Chinese-dominated DAP calls the shots.

Unfortunately, this is not Disneyland, where dreams always come true. The Malays, said the PoliTweet report, will be the deciding force in the next and other future elections.