SINGAPORE - A polytechnic student who fell ill with a high fever during his school's sports meet and was treated by paramedics from private ambulance operator, Singapore Emergency Medical Care Training & Services (SMCT), was shocked when the operator released pictures of him naked while he received treatment inside one of its ambulances.

The student's mother, who is not named, highlighted the $2,850 bill to Shin Min Daily News. She claimed that the ambulance operator wanted to charge this amount to her.

Her son, a 3rd-year polytechnic student, was treated by paramedics on standby during his school's sports meet, after he complained to his form teacher of feeling unwell. 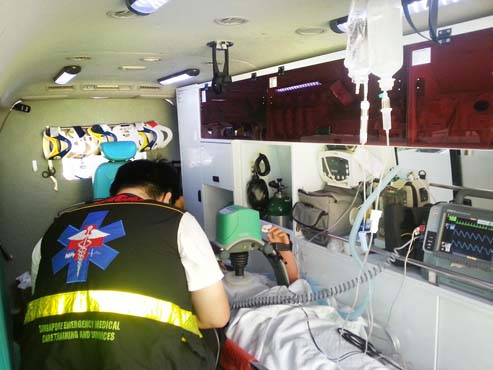 Shin Min also reported that the teacher referred her son to SMCT's paramedics, who then put him on IV drip and conducted ECG tests on him.

When Shin Min checked with SMCT over the medical bill, the ambulance operator forwarded a picture of the student without his clothes, in addition to replying to queries over the bill.

The picture was also forwarded to the polytechnic.

The student's mother said: "I was quite shocked when the school told me they received my son's naked picture, I simply couldn't believe it. What right do they have to do this? How could publicise my son's picture without our permission?" 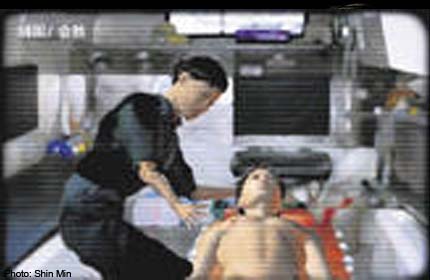 A spokesman for the ambulance operator said it was necessary to send across the picture to explain the situation. It was also standard procedure to provide pictures to any relevant organisations which wanted to investigate claims of overcharging by the operator.

He also said there are CCTVs installed in all their ambulances.

He added: "We do this for the patients. If there is an emergency, our paramedics can send across CCTV images to nearby clinics where doctors can help with treatment, and guide our paramedics."

The spokesman said that paramedics treated the student for an elevated heart rate and high fever. He also had a higher risk of suffering heat stroke, so paramedics stripped him to sponge him down with cold water and bring down his fever.

As for the $2,850 bill, the spokesman said this amount was for having paramedics stand by at the sports meet from 1pm to 6pm, and for providing emergency medical treatment services. It did not include ferrying patients to the hospital.

The company also denied sending the bill to the patient's mother.