SINGAPORE - You hear the hiss and crackle of dendeng, as the barbecued chicken or beef is tossed onto a grill.

In another corner of the Geylang Serai market, fast hands make quick work of a Ramly burger, where a greasy beef patty wrapped in thin omelette is chucked into lightly charred bread with a dollop of sauce.

Meanwhile, makcik or older Malay women haggle over brand new baju in resplendent hues, stretching the garments across themselves and their brood for good measure.

Welcome to the bustling Ramadan bazaars, night markets that spring up during the Muslim fasting month in the lead-up to Hari Raya Puasa, a day signifying victory over earthly desires.

This year, the Muslim festival falls on Aug 8, and shoppers have been flocking to at least eight street bazaars around the island.

The usual stalwarts in Geylang Serai, Kampong Glam and Woodlands have been joined by smaller heartland outfits in Tampines and Jurong. They popped up on Wednesday last week, the start of Ramadan, and will pack up one or two days before Hari Raya Puasa.

Vendors usually operate from about 2 to 11pm daily and peddle anything from food and clothing to toys and furniture. There are a few new twists this year.

The annual fair in Kampong Glam, for instance, has moved from nearby Kandahar Street to Muscat Street.

Mr Jefri Sidik, 50, who began organising the Kampong Glam bazaar in 2009 with 20 stalls, says there are 42 stalls this year. He says the bazaar sees about 6,000 to 8,000 visitors daily, but he expects the total number of shoppers to rise by up to 20 per cent this year.

"The Sultan Mosque is just next to the bazaar, so it is more convenient for people to come by after prayers," he explains.

Another highlight this year is the first indoor, air-conditioned Ramadan bazaar at the Singapore Expo, which will take place from Aug 1 to 4.

The 150 stalls will sell food, furniture, clothing and accessories. The event will also feature an entertainment area with games and a charity auction, says organiser Yudikarma Sulaiman, 38.

There will be a prayer room and a dining area for Muslims to break their fast. It will be a departure from traditional bazaars, where rainy weather usually spells trouble for business. "If it rains, the tentage at outdoor bazaars sometimes does not hold up and leakage can affect customers' shopping experience," Mr Yudikarma says.

He organised the Ramadan bazaar in Woodlands for three years from 2009, and has run shows such as Malay wedding exhibitions and product launches at the Expo for the past six years.

An indoor bazaar, however, comes with restrictions. For example, vendors use electric stoves instead of gas for cooking, and food stalls are set up far from lifestyle booths selling clothes to prevent cooking fumes from affecting business.

Rentals at the new bazaar are higher than those at traditional outdoor venues because of the air-conditioning and better facilities.

It costs between $1,200 and $3,000 to rent a unit at the Expo for the four-day event, while vendors pay between $1,000 and $3,500 for a month-long unit at traditional outdoor venues, depending on the size and location of the stall.

Mr Yudikarma expects the four-day fair to draw about 30,000 customers. "The few days before Hari Raya Puasa are when people actually start buying, rather than just browsing, which is what they are doing now at other bazaars," he says.

Last-minute purchases include food items and beauty treatments, such as henna painting.

"Best of all, they would have received their pay at the end of the previous month so, hopefully, they come with higher spending power," he adds. 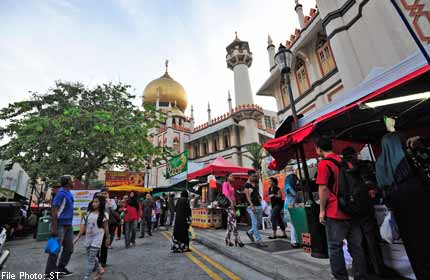 Where: Kampong Glam, along Bussorah Mall, which stretches between Bussorah and Muscat streets.

What: With the Sultan Mosque's golden dome in the background, vendors peddle their wares under creamy white gazebos.

Dating back to the 1960s, this bazaar has moved around the Kampong Glam heritage district. It used to be in Kandahar Street before moving to Muscat Street last year, due to traffic concerns.

There are 42 stalls that sell mainly food items, such as skewered meat kebabs, dates and nasi sambal goreng.

Khad's Kebab (unit 17): For some unusual fusion fare, try the spaghetti kebab ($6.50), which are noodle strands and skewered meat wrapped in tortilla flat bread. Owner Shahrem Selamat, 46, also offers standard food items, such as chicken and mutton kebabs, which cost between $5.50 and $6.50.

Le Bistro Parisien (unit 35): The stall is run by the halal French bistro of the same name in nearby Bussorah Street. Its Malay Singaporean owner, Mr Jean Francois Nordin, 53, used to live in France, where he trained in various restaurants for about 15 years.

He has set up a bazaar stall for the first time, offering food items more commonly found in upmarket cafes than regular night markets.

These include assorted French pastries, creme brulee with flavours such as durian, vanilla and pistachio, beef penne and rotisserie chicken with potato gratin. Prices range from $9.90 to $12.90.

Asked if the food might put off shoppers on the hunt for cheap, greasy staples, he says: "Singaporeans are well-travelled and have sophisticated tastebuds. It is high time we introduce these new flavours to a traditional bazaar." 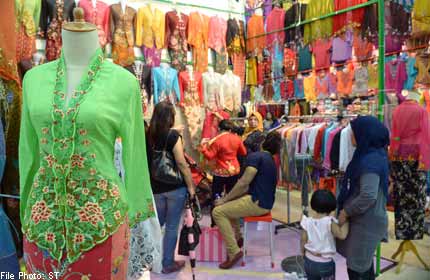 Where: Geylang Serai, from the area in front of Singapore Post Centre to the open field along Sims Avenue and down to Haig Road.

What: As Geylang Serai is a predominantly Malay precinct, it is no surprise that the Ramadan bazaar held there is usually the largest. More than 1,700 stalls have set up shop along the stretch, which has hosted the annual street market since the 1970s.

It is the largest apparel stall at the bazaar, manned by 30 assistants, and has been drawing big crowds.

Bargaining is welcome here, says owner Sharifah Khadijah Al Edrus, 49, who runs a shop in Golden Landmark Shopping Complex. "How much lower are the prices? I don't know. We'll have to see how good the customers are," she says with a smile.

Princess Arabia Fashion (units 58 and 59 at the open field along Sims Avenue): Check out the headscarves, shawls and dresses in bright hues and patterns. Prices range from $12 to $149. Owner Farhana Abdat, 27, says setting up a stall here helps to drum up business for her two shops in Tanjong Katong Complex and Joo Chiat Complex.

St Anne's Fashions (units 427 and 428 at the open field along Sims Avenue): This stall offers a good selection of Indian-Muslim clothing. Baby blue, purple and red saris are adorned with sequins "in the style of Delhi women, which is more elaborate", says owner Albert Antony, 40.

This contrasts with the more subdued style of women from Mumbai, who wear Punjabi suits with minimal embellishment. The outfits retail between $10 and $150.

Saheli (units 56, 159, 338, 392, 475 and 548 at the open field along Sims Avenue): To set off the stylish outfits, get henna painting - a tropical plant dye used to decorate the hands and arms - done at Saheli, which has been at the bazaar for the past six years. It operates six stalls within the market now.

Each henna painting costs $5 to $10, depending on the design. Business is slow now, but senior beautician Asnah Huttaf, 22, expects things to pick up in the two days before Hari Raya Puasa.

She says: "We tend to get thousands of customers during that period because people want their henna to be nice and fresh for the festive period."

NEXT TO WOODLANDS MRT STATION 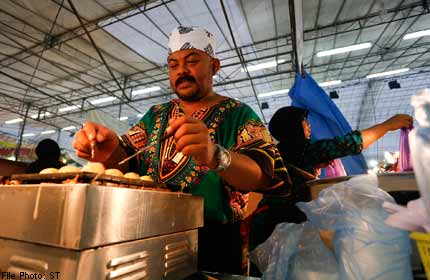 Where: Open field next to Causeway Point and Woodlands MRT station.

What: This is an annual affair organised by grassroots committees in Sembawang GRC. It draws vendors who find the competition in Geylang Serai and Kampong Glam too stiff, as well as people who shuttle between Singapore and nearby Johor Baru.

Organising chairman Mohamed Razaleigh, 42, explains: "We can catch the Causeway crowd who live in Johor Baru but work in Singapore, as they come here to buy food and other items before going home."

There are 200 stalls, of which about half sell food. The rest peddle clothes, toys and other household items.

Thai-Muslim Bites & Food (unit F9): The stall, which is making its debut at the bazaar, sells halal Thai favourites such as mango sticky rice and basil chicken ($3 a serving). Owner Michael Devraj, 40, says business has been good, with about 100 to 200 customers a day.

The affordable prices, which range between $2 and $4, are his main selling point, he says. "Go to a Thai restaurant and the prices could easily be tripled," he adds.

Warna Warni Kueh Raya (unit 84): You will find swiss roll with a cream filling made with chocolate bars from brands such as Kinder Bueno, Mars and Snickers ($18 per roll), as well as assorted cookies ($16 for 50 pieces).

Here are some smaller heartland bazaars that could give the pasar malam stalwarts a run for their money.

What: There are 19 food stalls selling nasi briyani, nasi padang and traditional Malay kueh. Most vendors are Tampines residents.

Where: Tampines Central, next to Tampines MRT station.

What: The 180 stalls sell mostly food items such as Malay kueh, kebabs and dates.

What: There are 41 stalls selling clothing and food items, including nasi padang, nasi briyani and apam balik - a folded peanut pancake.