Not just a pretty face 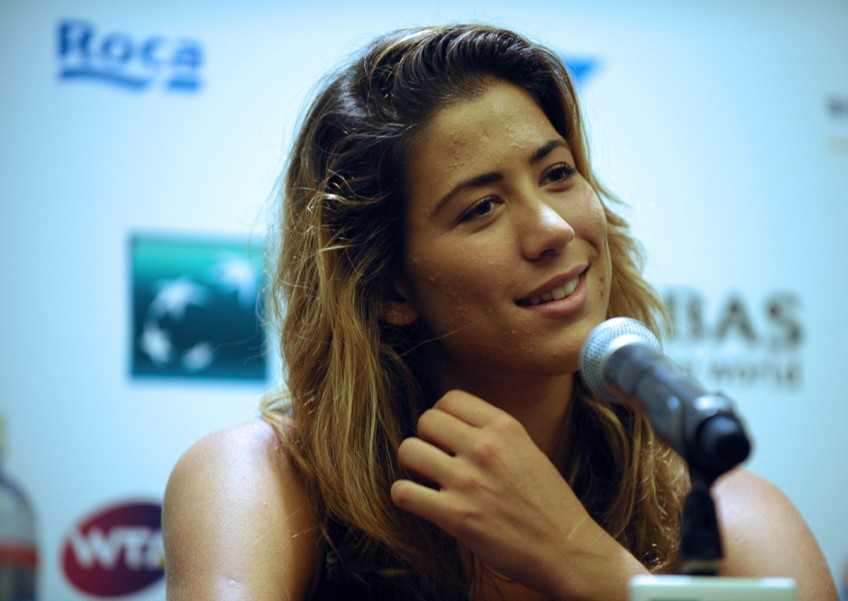 She's young, beautiful and riding on a fast rising star.

Only 16 days into her 22nd birthday, Garbine Muguruza has been bandied about as the next big thing in women's tennis.

Ahead of the WTA Finals that starts today at the Singapore Indoor Stadium, the Spaniard is seeded behind only Simona Halep in the singles competition, and ahead of Maria Sharapova.

The turn of events was unlikely for Muguruza. Only a month ago, she was No. 8 and fighting to qualify for the WTA showpiece event here.

She has had an amazing run that began in January 2014, when she hovered around just under the top 60.

Good results since then, including reaching the Wimbledon final against eventual champion Serena Williams in June, nudged her steadily up the WTA rankings.

Winning the China Open two weeks ago was the shot in the arm she needed, as it pushed her further up to No. 4 and second in the Race to Singapore.

The question now is if she has what it takes to rule women's tennis among the new generation of stars once Williams calls it a day.

"For sure, it's one of my objectives to be up there and stay there," Muguruza said yesterday in a media session.

"That's what I'm working for. I'm really motivated to achieve that and I think I'm on a good path."

So far, Muguruza is enjoying the dizzying ride from a relatively unknown player to a star on the threshold of bigger things, but the transformation has made a huge impact on her tennis life.

She is now highly sought after by the media and fans, and it won't be long before a long line of big-name sponsors start knocking on her door.

But Muguruza said the changes have been positive for her playing career.

"There has been a big difference, for sure. Obviously, my environment has changed in the tournaments I play, including the crowds and my fans, of course," said the world No. 4.

"But it's good difference because I worked for this, wanted it to happen and I am here for the WTA Finals. So it has been great."

The Spaniard said it is "possible" the tennis fraternity and fans will view her as the next big thing in tennis, if she wins in Singapore.

But the China Open champion was quick to point out that she has a punishing schedule, as she has also qualified for the doubles competition with compatriot Carla Suarez Navarro.

Her stamina will be tested to the limit, Muguruza added, as she needs to give 100 per cent in both competitions.

But there has been some respite.

After winning in Beijing, the 1.82m-tall star immediately headed to Singapore for some needed rest and has been clocking enough practice time to get ready in time for the gruelling competition at the Indoor Stadium.

"Normally when you finish a tournament, you don't have that much time, especially if you win, and go on to the next tournament," she said.

"But it has been really good since Beijing. I needed to rest for four or five days and start preparing for the last tournament of the year.

"I was motivated to come here and keep playing the way I have been playing so, hopefully, I can also achieve something good here.

"But I'm trying to be calm, not to think a lot about this. Hopefully, I can go out there, have a good match and go off the court saying, 'Look, I played in the singles in Singapore for the first time and I gave all my effort'.

The writer is a freelancer.