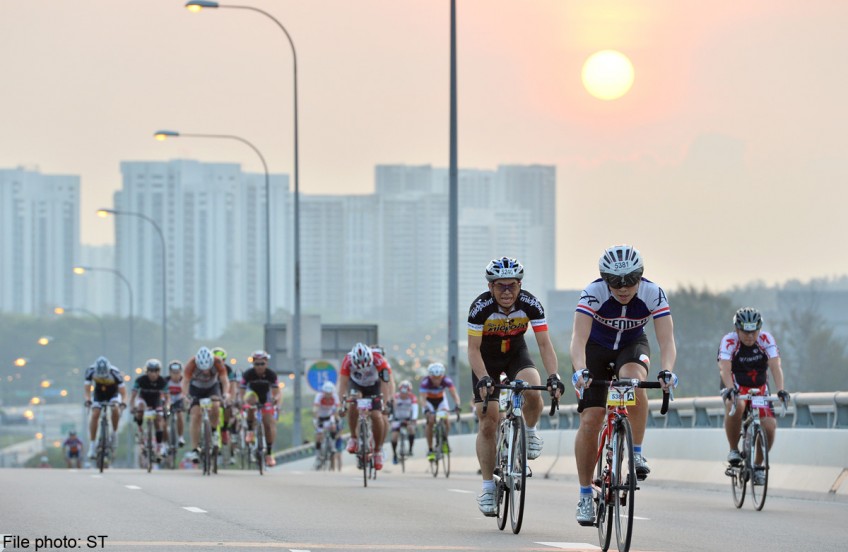 SINGAPORE - The local bank began calling for tenders on Monday, and interested parties must submit their bids by Aug 6. The winning bid will replace Spectrum Worldwide, the previous event organiser who ran OCBC Cycle Singapore and OCBC Cycle Malaysia. The partnership between OCBC and Spectrum was terminated recently after six years.

Here is the statement from OCBC Bank:

OCBC Bank has plans to refresh its OCBC Cycle events in Singapore and Malaysia under a new event organiser in 2015, and is calling for tenders from interested event organisers.

OCBC Cycle 2015 in Singapore will offer new experiences for all participants at the latest iconic venue, Singapore Sports Hub, while maintaining a quality environment that will make the sport of cycling more accessible to enthusiasts and newcomers alike.

The new OCBC Cycle 2015 in Malaysia will continue to be held at Dataran Merdeka, Kuala Lumpur.

OCBC Cycle will adopt a new look, reflecting the inclusive nature of both events for all cyclists and their Premier status.

Over the six editions of OCBC Cycle Singapore and three of OCBC Cycle Malaysia, these annual pedal-fiestas have become the marquee mass cycling events in the countries they are staged in. Each iteration has grown in impact, participation numbers and complexity.

OCBC Bank will work with a new event organiser to deliver a new concept for OCBC Cycle in 2015, ensuring that OCBC Cycle continues to be the Premier Cycling event in Singapore and Malaysia.

The goal for OCBC Cycle Series is to deliver safe, fun and healthy opportunities for friends and families to cycle together, on closed roads, in the heart of a global city. The size of the participation will continue to be dependent on the safety considerations as advised by the organiser, a key priority for the events.

OCBC Bank is synonymous with cycling in Singapore. It sponsors the OCBC Singapore Pro-Cycling team and the Singapore National Road Cycling Championships as well as OCBC Cycle Singapore.

The OCBC Cycle Singapore Safe Cycling Campaign was rolled out to help raise awareness of how to cycle safely. The new OCBC Cycle concept will build on this strong heritage, and seek to reinforce OCBC Bank's support for the entire cycling ecosystem in Singapore.

The inaugural OCBC Cycle Singapore was held on 22 February 2009. Flagged off from the F1 pit building, 5,400 cyclists enjoyed a route that took in iconic Singapore landmarks. The event grew significantly the following year, with 9,100 participants saddling up on and March 6 and 7, 2010.

The Mighty Savers Tricycle Ride was also introduced with many toddlers tackling a 50m route. Since then, in tandem with the rising popularity of cycling as a sport in Singapore, OCBC Cycle Singapore has grown from strength to strength: 11,500 cyclists took part in 2014.

Today, the OCBC Singapore Pro-Cycling team has 9 full-time Singaporean riders on its roster along with 9 foreign riders from Malaysia, Hong Kong, Thailand, Australia and New Zealand. Notable wins by the team in the past 3 years include the overall yellow jersey at Jelajah Malaysia 2013, Stage 2 of the Princess Maha Chakri Sirindhorn's Cup Tour of Thailand 2013, and Stage 1 of Banyuwangi Tour de ljen 2013.

The most recent win was at the Stage 1 of Le Tour de Filipinas 2014. Many strong Singapore cyclists have been given the opportunity to grow and test themselves on a global stage as members of the team, which is essential to their long-term development as national athletes.

The OCBC Cycle Singapore Safe Cycling Campaign was launched in 2010. To date, a total of 8,000 safe cycling jerseys and 100,000 car decals have been distributed. This year, the Safe Cycling Campaign was launched at Yu Neng Primary School, where two members of the OCBC Singapore Pro-Cycling team conducted safe cycling clinics for 830 students. OCBC Bank also distributed 200 helmets to the students.

In line with OCBC Bank's strong corporate social responsibility programme, a key component of OCBC Cycle Singapore has been its value as a charity platform.

In 2010, the Cycle of Hope was added to the event to raise funds for the National Cancer Centre Research Foundation and OCBC Bank's adopted charity, the Singapore Children's Society.

Since 2012, participants of OCBC Cycle Singapore have raised funds in support of the Singapore Children's Society, Dover Park Hospice, the Sports Cares Foundation and the SingHealth Transplant TREfund. Some $165,000 was raised in 2013 and $115,000 in 2014.

Said OCBC Bank CEO Samuel Tsien: "The OCBC Cycle series in Singapore and Malaysia sets the regional standard today for such events. Whether you're a top pro or a tyke on your trike, or any shade of amateur in between, we have been able to set you the right cycling experience, distance and setting. But that's no reason for us to be spinning our wheels; rather, we see our six successful iterations so far in Singapore - and three in Malaysia - as just tune-ups on the road to greater things.

"So we are looking for a new organiser to help us re-invent OCBC Cycle. We want innovative ideas to mix in with our distilled experience, so that our events can appeal even more widely and be even more imaginative, unique and relevant. Basically, we don't want to be just Asia's best; we want to redefine what it means to be the best cycling fiesta out there."

After the appointment of the new event organiser, OCBC Bank will launch the new OCBC Cycle together with the new organiser in the fourth quarter of 2014.