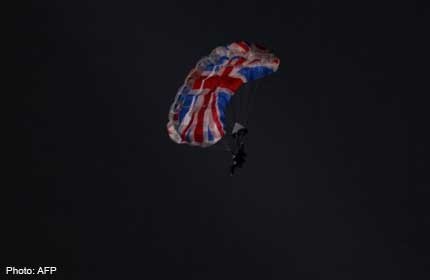 Mark Sutton parachutes out of a helicopter during the London Olympics opening ceremony on July 27, 2012. He died while wing-diving in Switzerland

LONDON - The stuntman who amazed the world when he parachuted into the London 2012 Olympics opening ceremony dressed as James Bond has died while wing-diving in Switzerland, British press reported Thursday.

Mark Sutton, 41, died on Wednesday after crashing into a ridge near Martigny, close to the French border, during a three-day wing-diving event, according to the Sun and Times newspapers.

The former army officer played the role of Daniel Craig's Bond in the most memorable sequence of the ceremony, accompanying another stuntman dressed as Queen Elizabeth II.

Wing divers wear special suits which allow them to glide through the air. It was reported that Sutton had jumped from a helicopter. Police said they did not yet know the cause of the accident.