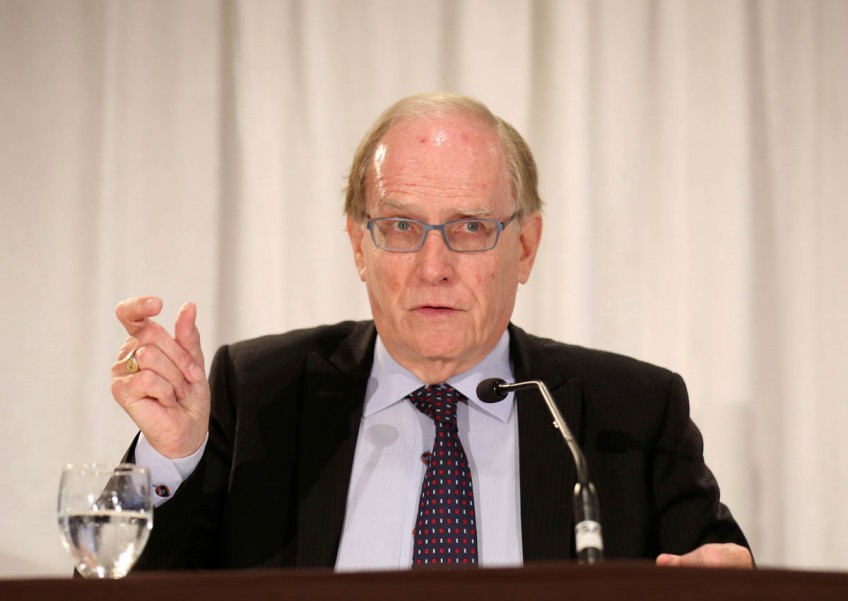 Richard McLaren, who was appointed by the World Anti-Doping Agency to head an independent investigative team, presents his report in Toronto, Canada.
Reuters

Montreal - International Olympic Committee (IOC) members were set for emergency talks Tuesday to decide Russia's status for the Rio Olympics after an investigation found rampant state-run doping at the 2014 Sochi Winter Games and other events.

The World Anti-Doping Agency (WADA) called for all Russian competitors and officials to be banned from next month's Games and other sports after the report unveiled what IOC president Thomas Bach called "a shocking and unprecedented attack on the integrity of sports and on the Olympic Games."

A probe by Canadian law professor Richard McLaren for WADA found the FSB secret service helped "the state-dictated failsafe system" carried out by the Moscow sports ministry and sprawling 30 sports over five years.

It also called for Russian officials implicated in the scandal to be sacked and for "Russian government officials to be denied access to international competitions, including Rio 2016."

McLaren said the coverup started in 2010 after Russia's "abysmal" results at the Vancouver Winter Olympics and continued until 2015 after the Sochi Games. It included the 2013 World Athletics Championships in Moscow and 2013 World University Games in Kazan.

President Vladimir Putin made the Sochi Games a showcase event and spent more than $50 billion staging the Games.

Russia, which strongly denies any state involvement in doping, is already banned from international athletics by world governing body IAAF because of doping exposed last year.

There will be mounting pressure for that to be extended even though Bach and some international federations have called for a way for Russian athletes proved to be clean to compete in Rio.

"The IOC will not hesitate to take the toughest sanctions available against any individual or organisation implicated," Bach said in a statement announcing the IOC conference on Tuesday to consider provisional sanctions.

McLaren's bombshell report said the sports ministry under Vitaly Mutko organised the subterfuge under which tainted urine samples were replaced and kept away from international observers.

"The Moscow laboratory operated for the protection of doped Russian athletes within a state-dictated failsafe system," McLaren said.

"The Sochi laboratory operated a unique sample-swapping methodology to enable doped Russian athletes to compete at the Winter Olympic Games," he added.

"The Ministry of Sport directed, controlled and oversaw the manipulation of athletes' analytical results or sample swapping," said the report.

It took part with "the active participation" and assistance of the FSB federal security service, athletes training groups and the Moscow and Sochi laboratories.

With the Rio Games to start August 5, US Olympic Committee chief executive Scott Blackmun said the IOC, WADA and world governing bodies must "impose sanctions that are appropriate in relation to the magnitude of these offences and give clean athletes some measure of comfort they will be competing on a level playing field in Rio."

"At a minimum, Russian (Anti-Doping Agency) RUSADA's return to compliance cannot be considered until all persons from the Russian Ministry of Sport and other government departments and agencies that are implicated by the report, including RUSADA, are dismissed from their roles," Reedie said.

The Kremlin said officials named in the report would be suspended, but also denounced the "dangerous" interference of politics in sport. It did not say which officials would be affected.

However, Mutko and his deputy Yury Nagornykh were among those named in the report.

US Anti-Doping Agency chief executive Travis T. Tygart said the report had revealed "a mind-blowing level of corruption" in Russian sport and all the way up to Putin's government.

WADA mandated McLaren to investigate allegations made by former Moscow anti-doping laboratory director Grigory Rodchenkov in May - he is now in hiding in the United States and wanted by Russian authorities.

Rodchenkov said the doping programme was "working like a Swiss watch" at Sochi and helped at least 15 Russian medalists avoid doping detection.

"I realise there are other aspects of his life that are not appropriate," McLaren said. "I didn't need to get into that." McLaren also insisted that he was "supremely confident" in the findings of the inquiry, even though "we've had a very intense 57 days."

McLaren said his report was handed over to WADA on Saturday and had not been leaked in advance.

A prior US-Canadian letter pushing for a total ban on Russian competitors at Rio was based on "rampant speculation" about the findings before they even came out, he said.