Once a world power in art and architecture 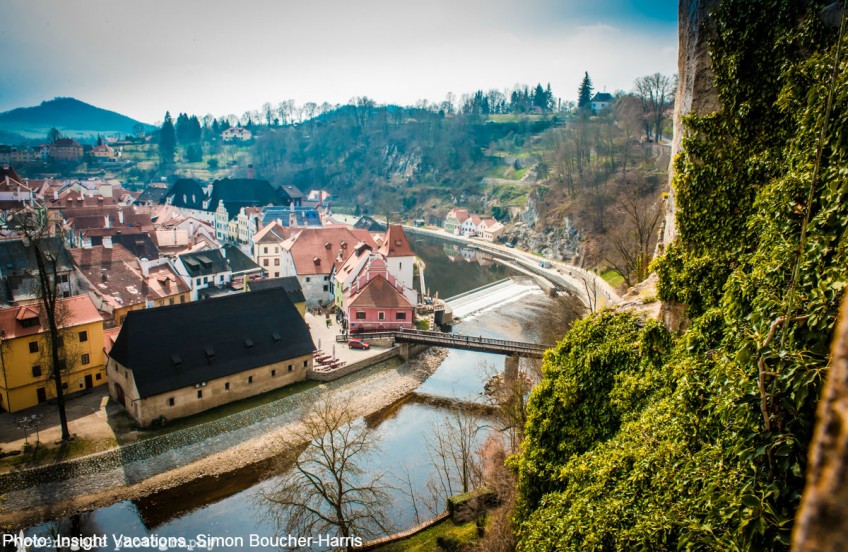 Cesky Krumlov, a quaint little city in Prague, Czech Republic, that was recognised as a Unesco World Heritage Site around the same time as Prague Castle.

A 12-century-old castle which houses a country's president. A 500-year-old bear moat with bears still living in it. An Intercontinental hotel that has communist architectural influences. Welcome to Eastern Europe, where the past is still very much a part of the present. Wander down the cobbled streets of Prague, Vienna and Budapest and you will marvel at how different architectural eras are represented, like a Darwinian evolution of design. Ba roque, Gothic, Art Nouveau - you name it and you'll find it, sometimes right next to each other. And the locals are so proud of their design heritage that should anyone suggest giving an old building a contemporary twist - as happened with the Dancing House of Prague which won accolades for its modern glass facade - they will be up in arms at the travesty.

After a week's immersion which saw us walk down the same halls as the royal Habsburg family, visit a Jewish synagogue-turned-memorial for the victims of World War II, and viewing grey, uniform buildings from the Cold War juxtaposed with Art Nouveau houses, we can understand their sentiments.

We kick off our tour on roads so narrow, our cushy 40-seater bus can barely squeeze its way to Old Town (circa 9th century) - one of four sections that the city is divided into. There is New Town (not so new since it dates back to the 1400s); Castle Town across the river which holds the famed Prague Castle; and Lesser Town - home for the, well, less wealthy.

Old Town naturally has an Old Town Square with an Old Town Hall Tower, which offers a vantage view of the city; the Astronomical Clock, which puts up a rather elaborate show featuring figurines of the Twelve Apostles on the hour; and the stunning St Nicholas Church which dates back to 1755. For a complete experience of Prague, wander along the streets and take in the Square - designed in typical Renaissance fashion with the streets fanning out from the town centre - where you will find quaint cafes serving Czech staples such as bread dumplings, duck, beef goulash and, of course, their daily staple, home-brewed beers. There are also plenty of puppet shops, and a surprising number of absinthe bars.

But it's in the alleys in the outskirts that you'll stumble across the unexpected gem: a jazz bar with a historic basement that dates back to the 14th century, a quiet vintage shop-cum-fashion museum that features gowns and accessories from the 1920s to the 1980s, and a busy market peddling local produce, souvenirs and traditional puppets.

All this, and you still haven't stepped into Prague Castle - which is also the official home of the Czech president.

Located across the river from Old and New Town, the castle grounds started construction in the 9th century, and features architectural styles that stretch across the past millennium including Romanesque, Gothic, Renaissance and Baroque - simply because it took that long to build it.

The castle offers sweeping views of the city and its famed red-tiled rooftops, which were fortuitously spared from bombing attacks during the world wars.

A short downhill stroll will find you in a rather romantic spot: a small canal just below the castle where couples hang their lovelocks on the railings to signify undying love. Walk a little farther and you'll reach the famous Charles Bridge, where buskers and street carts peddling handmade jewellery and photographs of Czech scenery dot the entire walkway, as Baroque-style statues guard the sides of the bridge.

As we roll along the Danube River towards Vienna, we make a one-night pitstop at Cesky Krumlov, a quaint little city that was recognised as a Unesco World Heritage Site around the same time as Prague Castle.

Tiny compared to Prague, Cesky Krumlov certainly doesn't lack in character. Its buildings, shops and pubs all emit a certain mediaeval charm that, if not for the "Free Wifi" signs inside the restaurants, you could be forgiven for thinking you've gone through a time warp.

A star attraction would be the Baroque-styled Cesky Krumlov Castle - a 13th century mega structure which looms over the town and once housed royalty up till the 18th century. The castle's most distinctive feature - apart from its 500-year-old moat which is home to resident bears - is its long bridge that stretches across a massive gap in the rock on which it is built. Inside is a beautifully wallpapered interior that seems to stretch on forever. But the true treasure is found on the other side of the bridge and in the castle's west wing, where its remarkable Baroque theatre sits - one of the few in the world that still serves as a live theatre. Built in the 17th century, the castle theatre's original wall and ceiling murals have been restored to their original form, benches replaced with authentic-looking replicas, and even stage backdrops and props made to resemble the ones used in 18th-century opera.

A half-day isn't quite enough to do Vienna justice, but if that's all you have, then head for the Schonbrunn Palace.

Once the summer home for Maria Theresa of the Habsburg family and her brood of 16 children (the youngest of whom would grow up to be the ill-fated Marie Antoinette, who was beheaded in 1793), the palace is a living repository of history, offering a detailed peek into the way Maria Theresa and her family lived.

A sprawling ballroom filled with gilded chandeliers and golden panels attests to the elegant Victorian dance parties of yore. Paintings of the palace's old inhabitants hang on the wall, some created by talented Habsburg hands, while some commissioned by paid artists - but even those weren't historically accurate. Our guide points out a painting of Prince Joseph's wedding that took so long to paint that it no longer depicted the actual wedding. For instance, the painting features a young Mozart in the crowd, even though he was never present at the wedding - "Probably photoshopped," our guide jokes.

Naturally, you can't leave Vienna without a musical experience of some sort, which is why we ended up in Palais Auersperg, where the likes of Mozart and Haydn once performed. In our case, the talented Wiener Residenz Orchester was on hand to impress with classic tunes such as the Turkish March and the Overture to Le Nozze di Figaro by Mozart, and the Blue Danube Waltz by Strauss.

Where Prague was rustic and Vienna was grand, Budapest is, in a word, cultural. You can spy grey, uniform buildings in the distance even as you roll through the countryside, and the city of Budapest is a medley of architecture and historical influences.

We drive past a stretch of luxury stores, marble opera houses that date back to the 19th century, coffee houses once frequented by famed poets and writers, and a stunning grey InterContinental Hotel that was built in the communist era.You'll also find the home of composer Franz Liszt, which now serves as a museum with the same piano he used to compose his most famous tunes.

At Budapest, there is no lack of activity or distraction. Tour a rustic hilltop castle in the day, and party at a club by the river at night; visit a hot spring (there are so many that the locals joke that Hungary actually floats on a massive hot spring) in the morning, and dine at the famous Gundel Restaurant, which has hosted everyone from Brad Pitt to Queen Elizabeth II, in the evenings.

Also, catch a live demo of an authentic Hungarian baker cooking up an authentic Hungarian apple strudel, where they stretch the dough so thinly it stretches across an entire table - exactly the way their grandmothers used to do it, apparently. And true enough, you'll never find a similar taste elsewhere in the world - the crust is delightfully thin and crisp, and the apples are fresh and dusted with cinnamon and confectioners' sugar, so that they are not cloyingly sweet.

Finally, finish your trip with a visit to the Central Market Hall, which boasts an impressive selection of vegetables, meats, pastries and spices, including the Hungarian-famed paprika on the ground floor, with souvenirs - both Hungary and China-made - and traditional Hungarian food on the second floor.

With such a rich mix of things to do at this vibrant city, it seemed only fitting that we ended our bohemian tour in Budapest. A breathtaking blend of historical, cultural and architectural influences that literally span more than a millennium, Eastern Europe takes you on a trip back in time into a world of Czech royalty, Viennese music and Hungarian apple strudel that you absolutely wouldn't want to come back from.

The writer was a guest of Insight Vacations.

Log on to www.insightvacations.com or call 6299 3382 for more information

This article was first published on July 12, 2014.
Get The Business Times for more stories.