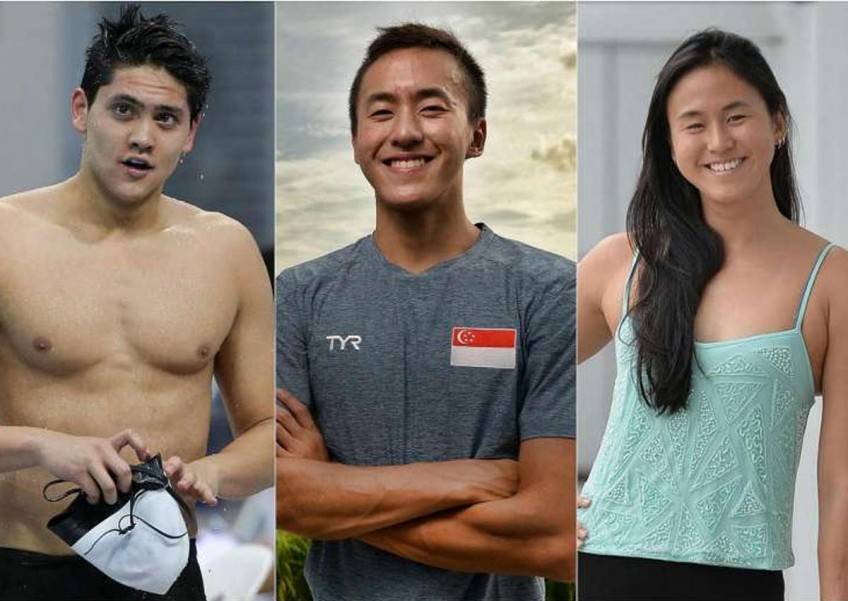 Singapore will field its smallest swimming squad at the Olympic Games in more than three decades, with just Joseph Schooling (left), Quah Zheng Wen (centre) and Quah Ting Wen to feature in the pool at Rio de Janeiro next month.
The Straits Times

Singapore will field its smallest swimming squad at the Olympic Games in more than three decades, with just three to feature in the pool at Rio de Janeiro next month.

Joseph Schooling, Quah Zheng Wen - both of whom previously qualified on 'A' times - and Quah Ting Wen were the only swimmers to be named on the final contingent list at yesterday's (July 9) Olympic flag presentation ceremony.

The last time Singapore sent two or fewer swimmers to the quadrennial event was at the 1980 Moscow Games, when the Republic did not field any athletes in the sport.

There had been hope that a handful would make the cut for the Aug 5-21 Games on 'B' qualifying times, the same way four of the five swimmers who did not clock an 'A' qualifying time for the 2012 Olympics earned their tickets to London.

Instead, none among Singapore's 11 swimmers received the call up from world governing body Fina this time based on their 'B' times.

However, rather than suggesting a decline in Singapore swimming, the result is more an indication of the rise in global competitiveness.

With a cap of 900 swimmers allowed for the Rio Games, not many slots were left for 'B' qualifiers after taking into consideration those who clocked 'A' times, the relay squads and universality places to ensure representation from countries who could not qualify.

Ting Wen was awarded the lone universality place given to Singapore since no woman swimmer from Singapore qualified.

It is believed that only about 30 places were left for 'B' qualifiers across all events, which likely meant no more than two of the best 'B' qualifiers in each event were extended an invitation by Fina.

National head coach Sergio Lopez, who is in Paraguay with the Quah siblings for a training camp, told The Sunday Times: "It really shows how the whole world is really pushing high performance."

The competitiveness of qualifying times now can be seen in the quality of the 'A' times, many of them comparable with the semi-final times at the 2012 Olympics.

Added national assistant coach Gary Tan, a two-time Olympian: "The scope of things has really changed. Previously it was almost a straight qualification for the 'B' times, but now you either get an 'A' cut or you might not make it."

Even with just two 'A' qualifiers, Singapore - traditional swimming kingpins in South-east Asia - is still likely to have fared better than its regional rivals. It is believed that Vietnam and Malaysia each have one swimmer who met the 'A' cut.

Four-time SEA Games 50m freestyle champion Amanda Lim, who just returned home after a training camp in Florida with the team, rued another miss after failing to qualify for the 2012 London Games.

"It's really a different era now. The 'A' times should always be our aim. You don't want to make the 'B' times and hope - you want to know you will go for sure, and train for it."

Lopez urged the Olympic hopefuls to keep the faith. He said: "You have to be willing to train and push yourself past your limits and, at the same time, be willing to sacrifice small things (in) your personal life.

"The world is getting smaller and, more and more, every one is able to get access to high performance training. (What's) most important is to never give up on your dreams."