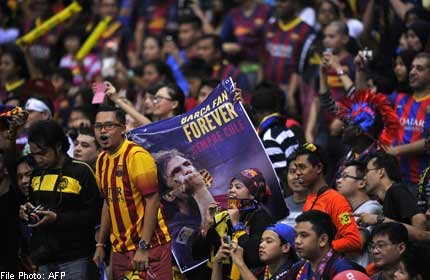 BSC Football Malaysia Sdn Bhd managing director Effendi Jagan Abdullah apologised for the inconvenience experienced by fans and said a refund could be obtained by writing in to the company.

"We received several complaints from fans. We will review all the complaints and refund them accordingly."

The match had to be relocated at the last minute from Bukit Jalil National Stadium to Shah Alam Stadium after the FC Barcelona team deemed the turf at the national stadium not fit for playing football.

It added that the condition of the turf had caused three of its players to be injured during their training on Friday.

The decision to move the match to Shah Alam Stadium had raised ire of VIP ticket holders who had to sit in the non-VIP areas.

Effendi said he apologised for the VIP seating arrangements.

"It was difficult for us to handle the change of venue at such a short notice."

He, however, hoped that fans would look at the good side of the match where the Malaysian team not only played a good game, but also received international attention as it was telecast live globally.

"There were all sorts of mixed reaction from the fans. Some were upset over the seating arrangements while others were not happy with the Barca players' attitude towards the fans.

"But not all fans felt the same way. There were also players who were really friendly like Jose Manuel Pinto, Pedro Rodriguez and Cesc Fabregas. It was the tour agent who arranged the schedule for the players and the players had to follow the tight arrangement."

Iqbal said his club helped fans with, among others, transport, accommodation, information on logistics as well as new seating arrangements.

Commenting on the refund, he said it was only right for the organisers to refund VIP ticket holders who had to sit at normal-priced seats.