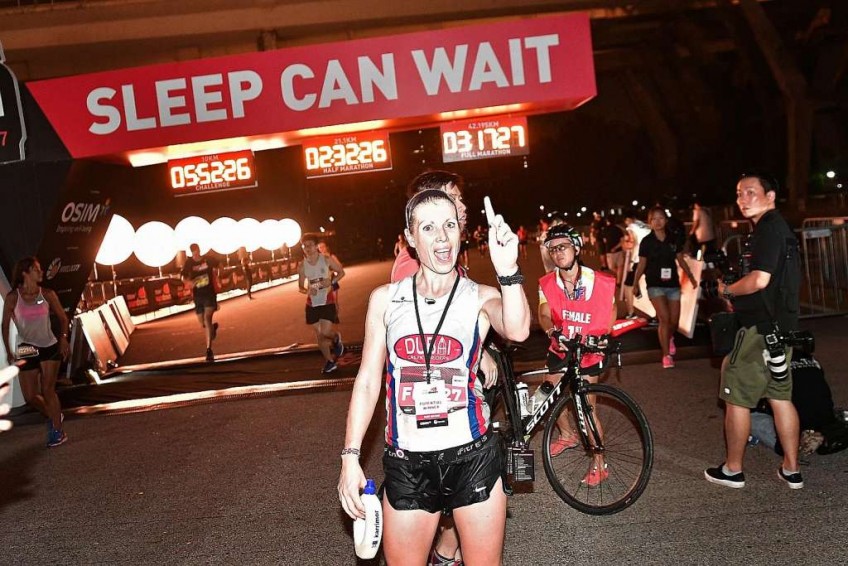 Despite having to run an extra 11/2 kilometres, the leading pack of the Osim Sundown Marathon men's race still emerged as the top finishers yesterday morning.

While following the leading cyclist, the front runners of the 42.195km full race went the wrong way at around the 2.5km mark.

They rejoined the correct route about 1.5km later but had to overcome congestion.

While they had to play catch-up after falling behind, the affected runners still completed the race among the top finishers.

Andreas Huse, a Norwegian exchange student who is studying at the National University of Singapore, won the race in his first attempt. The 25-year-old finished in 2hr 49min 52sec, ahead of Japan's Takuya Sawada (2:51:25) and Singapore's Dane Huang (2:53:19).

The winning time was more than 12 minutes slower than that of last year's edition - by China's Li Wei in 2:37:37 in his first attempt as well.

Li, who had been leading the pack up to the wrong turn, decided to drop out of the race after the mistake was realised.

However, the affected runners did not kick up a big fuss over it after the race. Huse said: "It was frustrating at that point but running a kilometre more is not a problem for me."

Another runner, who did not want to be named, recounted that a handful of runners were upset when they found out about the mistake. However, he did not bear any grudge or blame the race organisers, saying: "Everyone makes mistakes."

Adrian Mok, managing director of HiVelocity Events which organised the marathon, explained: "During the men's elite marathon race, the lead cyclist had inadvertently taken the wrong route approximately 2.5km into the race.

"This had led to a handful of runners being momentarily led off the course.

"This was rectified shortly after, with minimal impact on the race distance and results. It was regrettable that this incident had occurred and we apologise to the handful of runners who were affected."

The 10th edition of the annual mass participation race drew about 27,000 race-goers who sacrificed their sleep and turned up at the F1 Pit Building for the event.

Among those who pounded the roads last night was Megan Loy, 20, the lone Singaporean who suffered severe burns in a water park blast in Taiwan in 2015.

The NUS medicine undergraduate took part in her first running event and competed in the 10km Challenge alongside her father Joseph and a group of family's friends.

The blast had destroyed the sweat glands over about 80 per cent of her body, and she had to wear a pressure garment to protect her skin.

Loy said: "After the 7km mark, I could not feel my legs any more. It felt like pins and needles, but I just continued to brisk-walk.

"When you've been through something so drastic and life-changing, you kind of have that mentality within yourself that everything else pales in comparison to that."

Loy's mother, Lim Wee Ping, was at the last stretch to cheer her on while she crossed the finish line. Lim was relieved to see her daughter complete the race, adding: "As long as I see her smile, I know she's okay."

This article was first published on Mar 27, 2017.
Get a copy of The Straits Times or go to straitstimes.com for more stories.