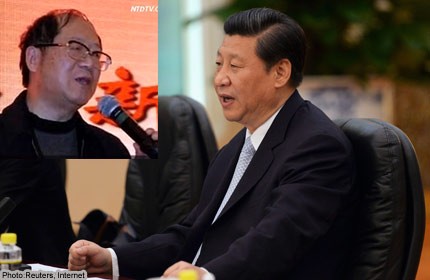 CHINA - Chinese President Xi Jinping's conservative stance on political reform has led to a major split within the princeling community, whose members share a common interest in preserving the ruling status of the Chinese Communist Party (CCP).

Mr Hu Dehua (inset in photo), the third son of the late party chief Hu Yaobang, openly criticised Mr Xi (on the right in photo) at a seminar held by the liberal magazine Yan Huang Chunqiu in mid-April. It was by far the most severe criticism lodged against Mr Xi since the latter became CCP general secretary last November.

Mr Hu Yaobang was the CCP general secretary from 1982 to 1987. He was known for "liberating" thousands of senior CCP officials purged by CCP founder Mao Zedong.

For this reason, he wielded considerable moral strength within the party. Mr Hu Yaobang's death in 1989 triggered a massive democracy movement in Tiananmen Square that was put down bloodily.

Thanks to his legacy, his two sons, Deping and Dehua, stood out as symbols of political reform amongst the princelings.

Before Mr Xi became CCP chief last November, he let it be known that he paid a visit to Mr Hu Deping and had a long chat with him. Many considered this an attempt by Mr Xi to build an image as an enlightened leader.

Now, however, Mr Xi has been taken to task by Mr Hu Dehua.

He started with Mr Xi's speech to party colleagues during his southern tour early this year.

In it, the President stated that the Soviet Union collapsed because the party had disarmed itself by allowing the army to be loyal to the country rather than the party.

"One lesson to draw is that we should forever grasp firmly the gun and not to disarm ourselves," the President said.

Mr Xi also lamented that when the country faced disintegration, given the size of the Communist Party of the Soviet Union (CPSU), there was no one "man enough" to come to its defence.

"If this was the case, then there was nothing to regret if the Soviet Union or the CPSU collapsed," he said.

Mr Hu Dehua then hinted that Mr Xi had misread the reason for the collapse of the CPSU. Mr Hu cited a CCP document of July 14, 1964, entitled On Khrushchov's Phoney Communism And Its Historical Lessons for the World, saying that there emerged in the Soviet Union a privileged class represented by the CPSU.

"The members of this pivileged stratum have converted the function of serving the masses into the privilege of dominating them. They are abusing their powers over the means of production and of livelihood for the private benefit of their small clique," the document said.

"The members of this privileged stratum appropriate the fruits of the Soviet people's labour and pocket incomes that are dozens or even a hundred times those of the average Soviet worker and peasant.

"They not only secure high incomes in the form of high salaries, high awards, high royalties and a great variety of personal subsidies, but also use their privileged position to appropriate public property by graft and bribery. Completely divorced from the working people of the Soviet Union, they live the parasitical and decadent life of the bourgeoisie," said the document.

Mr Hu Dehua pointed out that this was the real reason for the collapse of the Soviet Union.

Turning to present-day China, which was plagued with problems similar to the Soviet Union's, he said pointedly: "We blame everyone else, but never try to find problems from within. Is this a correct attitude?

"Why can't we learn from the Kuomintang (in Taiwan), reform ourselves and get elected, basing our legitimacy on people's authorisation and not on guns and cannon?" Mr Hu Dehua asked.

He then queried Mr Xi's remark that no one was "man enough" to save the CPSU. "What does it mean by 'man enough'?" he asked.

"Driving third-generation battlefield tanks against your own people is 'man enough'? Or resisting orders to kill your own people and opt to face martial court instead?" he asked.

"When the ruling party faces a crisis, there are two options: to suppress the opposition or to reach reconciliation with the people," Mr Hu Dehua said.

"We should learn from the experience of Chiang Ching-kuo (the late Taiwanese President who scrapped martial law). Be bold enough to reflect on the Feb 28, 1947 incident (where demonstrators were bloodily suppressed) so that historical pains could be redressed without bloodshed, revenge or purges."

Clearly, Mr Hu Dehua was referring to the Tiananmen incident.

He then turned to Mr Xi's latest assertion that one should not use post-reform history to negate the pre-reform years.

Mr Hu argued that without turning its back on the traumatic Cultural Revolution (1966 to 1976), the CCP could not embrace reform and open the door to usher in a period of prosperity.

"If one should not negate the first 30 years, does it mean that we still have to uphold the Cultural Revolution, uphold Mao Zedong's purges of senior cadres, including his remark that Mr Xi's father, Xi Zhongxun, was a counter-revolutionary who used novels as a weapon to conduct anti-CCP activities?"

This last question put the Chinese President in an extremely awkward position.

Mr Hu decided recently to release the transcript of his speech on the Web.

Mr Chen Ziming, a dissident branded as the black hand behind the 1989 Tiananmen incident, speculated that the recent salvos of propaganda attacking constitutionalism might have prompted Mr Hu to take Mr Xi to task.

Mr Hu's open criticism of Mr Xi also suggests that the princeling community is sharply divided over how to preserve the ruling status of the CCP, especially over whether rampant corruption and widespread unrest can be dealt with without political reform.