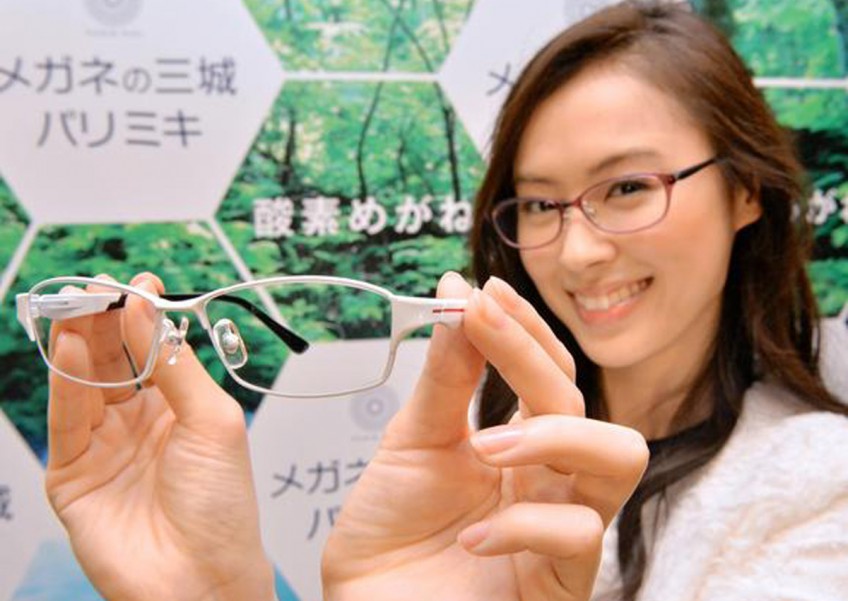 TOKYO - Smartphones and PCs may have become an essential part of most people's jobs nowadays, but being glued to a screen for most of your waking life is far from what you would call healthy. However, some eyewear manufacturers have seen the increasing number of people suffering chronic eyestrain as an opportunity.

Paris Miki, a Tokyo-based chain of upmarket eyewear stores has released a product called "Sanso Megane" (oxygen glasses) to break into the so-called "functional eyewear" segment, which until now has been dominated by its rival JIN.

Launched on Nov. 27 last year, the glasses supposedly attract oxygen and water vapour to the eyes to prevent dryness and other types of eyestrain. The frame of the new glasses is coated with the company's proprietary technology, a unique light-induced transparent film to create a moistened environment around the eyes.

The film is mainly comprised of titanium oxide which, according to the company, generates electrons and holes left by electron excitation when it reacts with ultraviolet light. These holes in turn react with hydroxide ions, generating oxygen and water vapour around the eyes.

In order to back up its claims, Paris Miki conducted a 24-hour performance test at a public facility. The results did indeed show that oxygen glasses generated higher levels of both oxygen and water vapour surrounding the eyes than regular glasses.