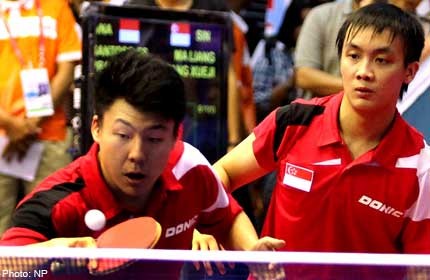 SINGAPORE -THEY enjoyed the festivities last Friday as participants in the National Day Parade, but Singapore's table tennis players are back in action this week at the Harmony Open in China.

The likes of Yu Mengyu, Isabelle Li, Pang Xue Jie and Clarence Chew will compete for the first time since the Singapore National Olympic Council (SNOC) gave them the nod earlier this month to compete in December's South-east Asia (SEA) Games in Myanmar.

The Harmony Open is the first of four tournaments the selected paddlers will do battle in ahead of the SEA Games, which will be held in Naypyidaw from Dec 11 to 22.

The other events are the Golden Racket Invitational Table Tennis Tournament in Vietnam next month, and the Polish and German Opens in November.

Yu, 23, who will spearhead the women's team in the absence of Singapore No. 1 Feng Tianwei at the SEA Games, also qualified for the Women's World Cup in Japan next month.

Singapore Table Tennis Association (STTA) high-performance manager Eddy Tay said: "We are also looking to hire additional sparring partners for the team, and put together a training stint before the Games, but we haven't decided on the details of it yet."

Five paddlers were nominated for the four slots each for the men's and women's team events at the SEA Games, and the STTA will name the respective teams soon.

"Our high-performance team should be meeting soon to decide on these two matters. The selection of the paddlers will not be solely based on their performances in the upcoming tournaments, but also a number of factors," said Tay.

"These include our preparations for the 2015 SEA Games, which Singapore will host, and we hope players like Isabelle can lead the team in two years' time."

The STTA elected to go with a blend of youth and experience this year, omitting the likes of Feng, and male stars Gao Ning and Yang Zi from their nomination list.

While Yu will lead the women's team, Zhan Jian, 31, is expected to head the men's team in Myanmar.

The strategy, according to STTA president Lee Bee Wah, is to have the senior players gun for the four titles on offer at this year's SEA Games - men's and women's singles, men's and women's team - while the younger paddlers gain experience in the regional competition.

Said Tay: "This SEA Games will be good for players such as Mengyu, who will have to learn to step up and lead the team instead of Tianwei. "It will only do her good in the future."