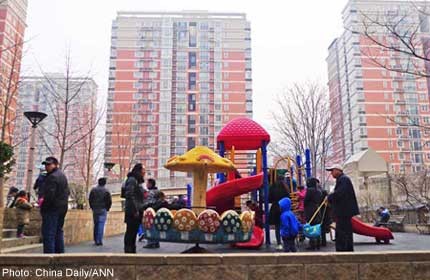 The battle for a better education goes beyond schools, as Wang Ying reports in Shanghai.

University lecturer Jiang Ying is a typical Chinese parent. She has high expectations for her daughter and adheres firmly to the following logic: To be successful in competitive Chinese society, you have to graduate from a prestigious university.

Before that, you must attend a respected middle school, which means, in most cases, you will need quality education at primary school.

Although her daughter is only 3, Jiang has become embroiled in a battle to win admission to a well-respected primary school in southwest Shanghai's Xuhui district.

Under China's nine-year compulsory education system - six years of primary schooling followed by three at middle school - parents are not allowed to choose the public school their children attend. Instead, they can be enrolled only at the school nearest their home.

Although it may appear to be a postcode lottery, parents who always put their children's education first and never skimp on their efforts to create better conditions for them can circumvent the apparently rigid rules.

For Jiang, that meant relocating her family to Xuhui district, known for its high-quality schools.

Jiang, a mathematics lecturer, now regrets that she failed to factor in the education issue when she bought her first home in Minhang. Now she may have to pay heavily for that miscalculation.

In first-tier cities such as Shanghai, high-quality schools have become scarcer as a result of the rising number of school-age children, driven by an influx of newcomers and a growing realisation that early-stage education can be a crucial element in later life.

"Apartments located only a block away are 50 per cent cheaper than ours, but they are not included in the enrolment area for our ideal school," said Jiang, who added that the real estate agent who recommended the apartment told her that people only buy this sort of small dwelling as an "admission ticket" to a good school, and nobody really lives in them.

Eventually, she squared the circle, albeit in a complicated manner: "First, we will rent, and live in, a clean and spacious apartment close to the school. Then we will sell our current home in Minhang. With the money from the sale, we'll buy the apartment in Xuhui and register my daughter's residence three years ahead of the time she starts school, in line with the requirements."

In China, primary and middle schools usually have an unwritten rule about the registration period for a child's hukou, or household registration, at a property within the school's catchment area. In Shanghai, the time scale is usually three years.

"When my daughter starts at the school, we'll sell the Xuhui apartment to someone who needs it. The agent assured me that the price will continue to rise because many parents are chasing homes in this area," said Jiang.

The intensifying competition for high-quality schooling is affecting home prices in the city. Apartments close to premier schools sell quickly and are expensive, according to local media reports.

A 28-sq-m one-bedroom apartment recently sold for 2.35 million yuan - an incredible 83,000 yuan per sq m - in the downtown district of Jing'an. The buyers bought their apartment simply so their child would be eligible to attend a well-respected school, the Shanghai Morning Post reported in June.

"Privacy concerns mean we are unable to verify the deal, but we believe this phenomenon is rare," said a district government clerk surnamed Yang.

Song Huiyong, director of the research and consultation department at the property consultancy Shanghai Centaline, said the frenzy for otherwise undesirable apartments is a result of the extremely limited number of high-quality schools in China.

"Chinese parents will try every means to send their kids to the best schools and that further pushes up the price of homes close to good establishments," he said.

Yang said the activity is market-driven, and the government won't step in to rebalance the market.

"It's expensive to pay 80,000 yuan per square meter for an old apartment, but who would have imagined that a 14-sq-m penthouse, also in Jing'an, would sell for 2.6 million yuan in April?" commented a real estate agent who asked not to be named.

"The price gap between 'school-qualified apartments' and 'average' ones is just an indication of the importance of education resources and the difference between a very good school and an ordinary one. Furthermore, smaller apartments will always be priced higher in terms of square meters because their total value is lower," said Huang.

To meet parental demand, the Shanghai-based property developer Greenland started presales on a new residential project in the northeastern district of Yangpu, an area with excellent schools, in late June.

"The school districts will not be decided until the end of the year, but our location guarantees entry to good primary schools," said Zhang Hua, a salesman for the project, who advised that a three-bedroom apartment will cost between 4.5 million and 6 million yuan.

But sometimes the plan of securing a place at an ideal school by buying a house in the catchment area fails because schools may change their enrolment areas every year. Although the changes are usually minor and infrequent, the possibility exists that a "housing-for-schools" plan may not bear fruit.

Yu Lu, a white-collar worker at a US-headquartered company, knows only too well that buying a home close to a desirable school does not always guarantee a place for the child of the family.

Yu and her husband were far-sighted and bought a home close to a renowned school even before their son was born. "I always wanted to send our child to the Liushifuxiao (a high-quality primary school in Shanghai's Pudong New Area). With that in mind, we bought an apartment right next to the primary school in 2000, so our boy could get there without even crossing the road," she said.

However, just two years later, Yu and her husband discovered that the enrolment area for their dream school had changed and their apartment was no longer on the school's list.

Yu had to send her son to a different school, though it's not a famous establishment.

"Over the past three years, school-related properties have continued to boom, but no one can guarantee that buying a house will result in entry to a good school," said Wang Tijia, an agent at Century 21 China Real Estate in Shanghai.

Centaline's Song Huiyong suggested that apartments built more than 20 years ago and priced at more than 80,000 yuan per sq m are a risky prospect financially, even if the owners speculate in the niche market.

"The value-added educational resource is the only reason to buy such an uninhabitable apartment at such a high price," he said.

A classic tale, related by parents down the generations, concerns the mother of Mencius, a famous Confucian philosopher who lived 2,400 years ago. The wise mother moved home three times to find a better place to raise her son. At the third move, she relocated from a noisy and money-grubbing marketplace and settled her family near the academy where Mencius received the education that helped him become a great scholar.

That story may not resonate with Chinese parents nowadays though, because they have learned a harsh lesson - even if they move to a home near a good school, usually after spending a lot of money, they may find their plans for their child's education are ruined by circumstances beyond their control.