Paris chef puts a splash of Malaysia into his dishes 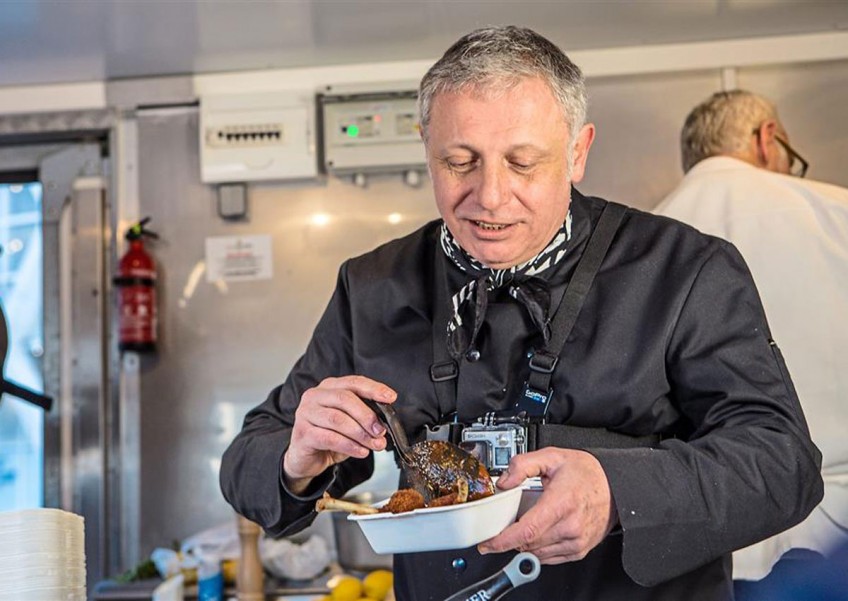 If French Chef David Martin has one piece of advice to give his fellow countrymen, it is to travel and experience the best food in Asia. Well, make that two. David also wants them to try palm oil that is used in cooking in this part of the world.

"One of the great pleasures of being a chef is getting to experience the food and recipes of other countries, cultures and peoples. When I lived in Cambodia, I discovered palm oil and came to realise the incredible benefits it brings to a recipe.

"Its heat resistance, stability, and taste are perfect in the kitchen … and even its deep red colour is inviting to me," says Martin.

Son of TV celebrity Jacques Martin, the chef owned The Malraux, a restaurant right at the foot of the Angkor temples, in Cambodia where he lived for a few years. Martin now runs La Traboule in Paris, and is also a television personality himself.

The City of Love is also where Martin professed his love for palm oil earlier last month.

"I did the cooking, but not the driving, and we provided food to the business people in the city," he says.

"The food truck was an instant hit … it is such a great way to connect with people."

However, the chef agrees that palm oil is not well-known or well-understood in France. "We cannot grow oil palm in Europe, and people cook instead with local oils - such as sunflower, rapeseed or olive oil. As a result, palm oil has been the focus of some fear in Europe, and negative campaigns and misunderstandings are prevalent."

And what better way to counter misunderstanding, he thought, than through education and experience. Martin believes that his food truck project was an excellent opportunity for French people to get to know palm oil better.

But of course, learning is always more fun when there is food involved.

He prepared three varieties of popular finger food on the food truck but gave them his own twists: Potato Churros with Choron sauce, Breaded Chicken Wings with Devil Sauce and Fish and Chips with Palm Oil Vinaigrette.

"All three recipes were cooked using Malaysian palm oil. It was an opportunity for Parisians to see and taste palm oil instead of just reading about it," he says.

"It was very popular so perhaps the French do have a taste for palm oil after all. Nearly 200 dishes were distributed within an hour. The crowd was so pleased, I even gave away some of my personal stock of palm oil to them."

During the event, the chef shared the knowledge he had gleaned from scientist and cardiothoracic surgeon, Dr Guy-Andre Pelouze, who provided all the scientific and health advice for Martin's work with palm oil.

"His gave me fascinating new insights into the benefits of palm oil, like the Vitamin A betacarotenes and other wonderful things that are present in the Malaysian red palm oil that we used in the food truck," he says.

Martin says he noted that many visitors to the food truck actually approached him about palm oil.

"Some were genuinely curious, as they had never tasted palm oil before; some were cautious, because they had read negative stories about palm oil from some media campaigns here in France.

"Some other people were just hungry. Most were open to the idea of trying something new and challenging their prejudices," he says.

"Hopefully, we helped to open the minds of Parisians to the wonders of palm oil and Malaysian cuisine."