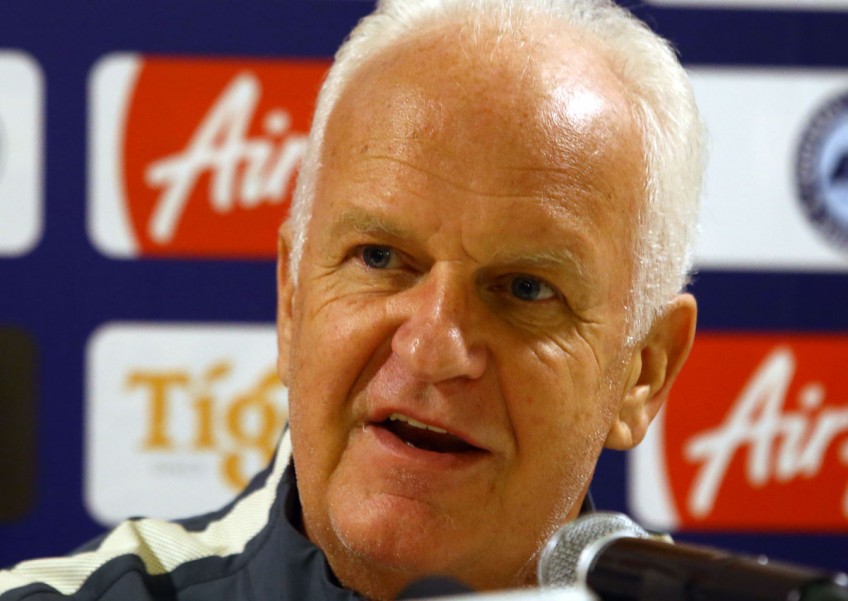 While the terrorist attacks outside the Stade de France during the France-Germany friendly stunned everyone, Singapore coach Bernd Stange had his share of anxious moments, too.

The 67-year-old German revealed that he had a harrowing time as his sons were in the stadium watching the game last Saturday morning (Singapore time) .

At yesterday's press conference ahead of tonight's World Cup/Asian Cup Group E qualifier against Syria, Stange revealed: "I was personally involved. My two sons Martin and Michael were in the stadium watching France play Germany when the attacks happened."

It was reported in the Wall Street Journal that a suicide bomber was discovered wearing an explosives vest when he was frisked at the entrance to the Stade de France about 15 minutes into the game.

While attempting to back away from security, the attacker detonated the vest, which was loaded with explosives and bolts.

Around three minutes later, a second person blew himself up outside the stadium, while a third detonated explosives at a nearby McDonald's, as one civilian died in the attacks.

A day before the game, the Germany team and all other guests had been evacuated from their hotel in western Paris, following a bomb scare. They eventually returned after police, who came with sniffer dogs, cleared the hotel of threats.

Stange said: "I called Olivier Bierhoff to prepare two tickets in the hotel.

"They (Martin and Michael) could not even get the tickets from the hotel at the first moment because it was closed.

"At 5pm, they got the tickets and they got to the stadium.

"After the attacks, they woke me up at night. In the middle of this trouble, they are walking 11km back after the match and reached the hotel at 4am."

The Stade de France was the arena where Stange made a name for himself as Belarus coach, when they opened their Euro 2012 qualifying campaign by beating the hosts 1-0.

But, this time, the German tactician could talk only about the shock he felt over the events.

He said: "My family and wife were all very nervous. I had good memories in this stadium but on Saturday, football was second on my mind.

"I forgot everything else and I was happy that my sons are safe and managed to get out of France safely."