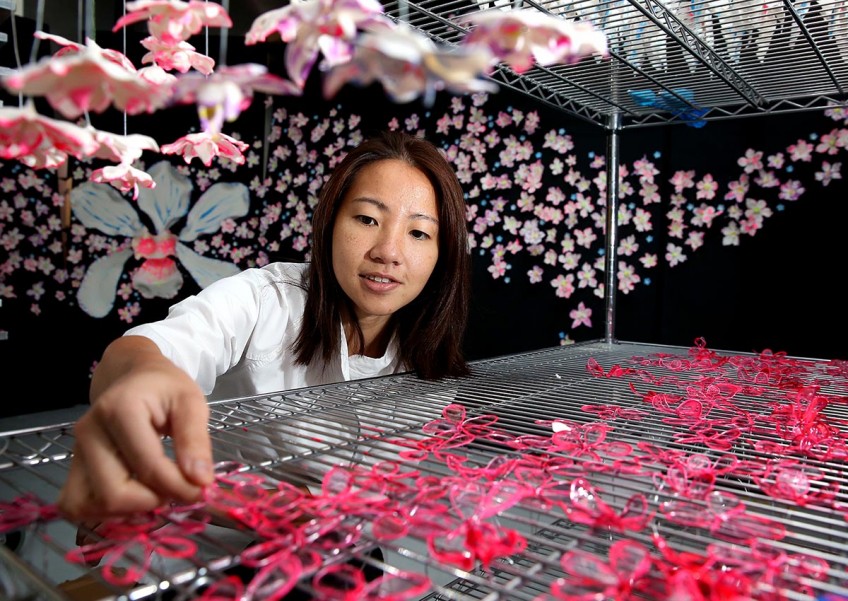 The chef-owner of the popular 2am:dessertbar in Holland Village will open Cobo House by 2am:dessertbar, an 82-seat casual fine-dining restaurant in Kennedy Town, touted as an up-and-coming hot spot on the western edge of Hong Kong island, in March. She will also create savoury dishes with an artistic flair for the restaurant.

In Tokyo, the 40-seat eponymous dessert restaurant, Janice Wong, will open in a new mall in the bustling Shinjuku shopping district in April.

Eight years after starting 2am:dessertbar, Ms Wong, 32, says that the time is ripe to expand overseas.

"We have accumulated enough signature desserts that can be rotated around menus in restaurants overseas."

The 3,000 sq ft Cobo House will have a farm-to-table concept with herbs and greens air-flown from a farm in Okinawa, Japan, and its rooftop garden.

The all-day dining menu will include dishes such as mushrooms served with roasted coffee soil, and sous vide and seared wagyu beef, which is dressed up with inscriptions of poems made with cocoa butter and served with daikon and scallop powder. There will be about 11 plated desserts, which will come mostly from 2am:dessertbar menu.

Ms Wong, who is partnering a Hong Kong-based property developer, says her experience in creating full-course menus for private dinners over the past eight years will come in handy.

"I am a curator of ingredients and have the versatility of using ingredients for both savouries and pastries."

The 800 sq ft Janice Wong dessert bar in Tokyo will serve eight to 10 plated desserts. Diners can sit at the bar counter to watch the chefs prepare and plate their desserts.

The eatery is in Newoman, a new shopping mall targeted at women near the high-traffic south exit of Shinjuku train station.

The desserts will include Cassis Plum, a blackcurrant bombe served with elderflower yogurt foam, plum liqueur, raspberries and yuzu, and double-baked Chiyuki apple tart. Prices for the ala carte desserts start from S$18.

Ms Wong also hopes to use seasonal Japanese ingredients such as cherry blossom and dekopon, a hybrid of various mandarin oranges in desserts. There will also be a retail section selling chocolates and pound cakes.

Ms Wong, who was named Pastry Chef of the Year this year and in 2013 in the World Gourmet Series Awards of Excellence, was invited by shopping mall developer, Lumine one-and-half years ago to set up shop in its Newoman mall. She is partnering All Nippon Airways in opening the dessert bar.

She plans to visit the shop four times a year to develop new recipes, and one of her pastry chefs, Mr Wong Wei Kein, 24, will be based there to assist a Japanese head chef.

To stand out in the Japanese market, which is studded with famous patisseries such as L'eclair De Genie and Pierre Herme from Paris, the dessert bar will not offer familiar confections such as macarons but focus on "fun and theatrical desserts" and new products such as art-adorned pound cakes.

Ms Wong says: "It is certainly intimidating. The competition among pastry shops in Japan is 100 times more intense than here. There's a higher standard of creating perfect pastries every day and that will push me further and grow as a chef."

This article was first published on November 3, 2015.
Get a copy of The Straits Times or go to straitstimes.com for more stories.