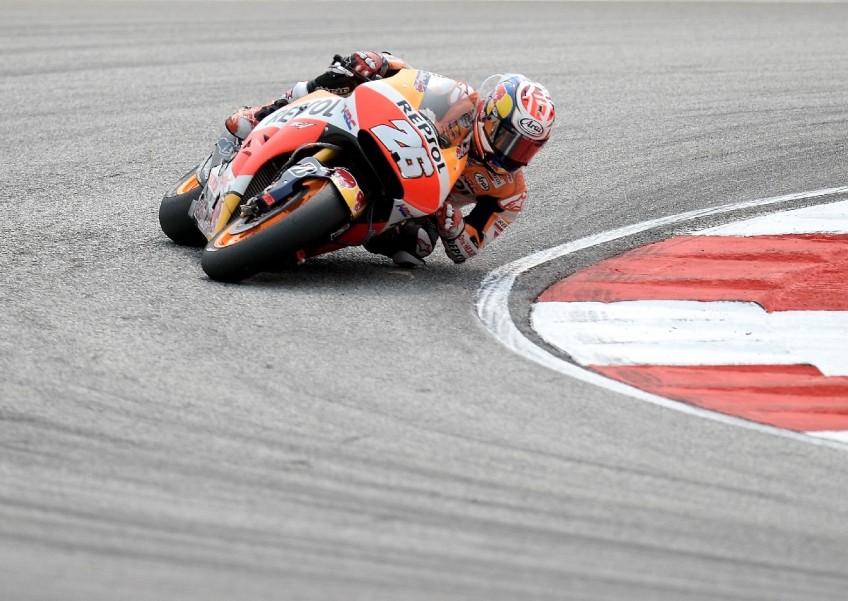 The result at Malaysia's Sepang track sets the stage for a thrilling climax to the season, as Yamaha teammates Lorenzo and Rossi will battle it out in the finale next month in Valencia, southeastern Spain.

But controversy marred the result as Rossi was penalised for a collision with defending world champion Marc Marquez, furthering endangering the Italian's hopes of securing his 10th world championship next month.

Lorenzo and Pedrosa accused Rossi of lifting his leg as Marquez tried to overtake him, possibly impeding the Spaniard, who crashed and had to retire from the race.

An infuriated Marquez also lashed out at Rossi, saying the Italian had kicked the handlebar of his bike.

Race officials said 36-year-old Rossi, who was notably absent from the winners press conference after the eventful race, will have to start from the back of the grid in Valencia.

"We were overtaking at a very fast pace. I don't know what was Valentino thinking. I did not expect him to carry his leg and push my handlebar. That is why I crashed," Marquez told reporters.

"To hit (my bike) with his leg... I have - and also I think many other people have - lost respect for Valentino," he added.

Rossi denied he was at fault.

"In Turn 14 I tried to go wide to get a better line to make him (Marquez) slow because he just rides to cause me some problems. Unfortunately... and I think he crashed in that moment," he was quoted as saying by Motogp.com.

The accusations come after a tense week in which Rossi angrily accused Marquez of helping Lorenzo to win points in the Australian Grand Prix, where Marquez won and Rossi managed only fourth place.

Lorenzo on Sunday hit back, saying his teammate had only received a slap on the wrist over the collision with Marquez because of his superstar status.

"If it was another rider, he may be punished much harder. I did not expect this to happen. I am disappointed," he said.

"It think it is unfair. Valentino got 16 points and Marquez got nothing. I cannot believe anyone will do this kind of thing." Lorenzo, who has steadily whittled away at Rossi's championship lead, is now just seven points behind.

Meanwhile, Pedrosa started from the pole position and never relinquished the lead for Honda.

"It was a fabulous race, but I was not aware of the problems behind me," he said.

Lorenzo, 28, had begun from the second row, and 11 points behind Rossi for the world championship, but he burst ahead into second place on lap two and held it the rest of the way.

Rossi and Marquez waged a tense, see-saw fight for third and it was on the seventh lap - when Marquez was seeking to bulldoze his way past the right side of the Italian's bike - that the scuffle broke out.

The alleged kicking incident happened on a corner just after Rossi appeared to taunt Marquez, gesturing at him to open up his throttle.

Rossi has nine career world titles, but has not won since 2009, and relations with his teammate have been tense since they raced together for Yamaha in 2006-2008.

Their relationship improved after Rossi rejoined the brand in 2013, but with the world title at stake, their old animosity has re-emerged.