A pint or a prayer? Monks in Japan put Buddhism on the menu 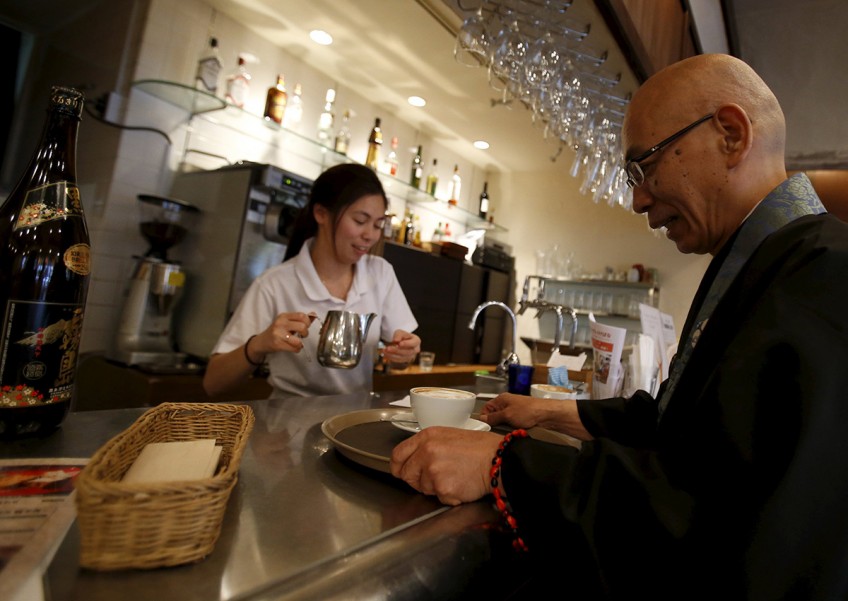 TOKYO - The hum of conversation and the clinking of spoons and coffee cups fills the wood-panelled cafe in a fashionable Tokyo neighbourhood as more than a dozen customers sip drinks and nibble desserts.

At first glance, the cafe, that also serves alcohol, looks like any other except for an altar next to the countertop bar with a Buddha statue set against a gold backdrop.

Its name, Tera Cafe, is a another hint - Tera is Japanese for temple.

The menu confirms this is something different. It lists classes for 1,500 yen (S$19) in weaving prayer beads, calligraphy with sutras, or lines of scripture, and consultations with a Buddhist priest.

Tera Cafe is part of a flourishing phenomenon in Japan where Buddhist monks are seeking to make inroads in the modern world as the public's connection with a 15-century-old tradition fades.

Gone are the days when the faithful would drop by their neighbourhood temple to talk to a monk over tea.

Famously areligious, many Japanese observe rituals from different traditions, perhaps going for a church wedding and worshipping at a Shinto shrine at the New Year. Buddhism is associated with funerals.

Hirotake Asano, head priest at the Shingyoji temple near Tokyo who opened Tera Cafe in 2013, said Buddhist priests had to venture into society to build links.

"Instead of lamenting that people no longer visit temples, I wanted to bring the temple to the people," said Asano, who owns four restaurants and a golf shop.

His businesses underscore the need for Buddhist monks to find a livelihood outside the temple.

Among other businesses with Buddhist themes are rent-a-monk services from Amazon Japan and retail giant Aeon, for funerals and other rituals.

There is also a chain of bars where ordained priests clad in traditional robes serve cocktails and offer advice.

Many sects of Japanese Buddhism allow priests to drink alcohol, eat meat, and marry. Such acts are forbidden for monks in places like Southeast Asia where there have been instances of association of Buddhism with bars triggering public outcry and prosecutions.

It's still a surprise for some in Japan. "Temples are kind of hard to enter," said Aya Nishi, a 23-year-old customer at Tera Cafe. "I have a dark image of them, like with funerals. But this cafe is well-lit and welcoming. I was also surprised that they even serve alcohol." As well as the alcoholic drinks Tera Cafe offers shabu-shabu pork and ginger-flavoured chicken.

Business appears to be brisk.

On a recent visit, women in their 20s to 40s - the cafe's main clientele - took up most of the dozen or so tables.

And the interest in Buddhism?

"That's difficult to measure," said Shokyo Miura, one of about 10 monks who take turns as an on-site priest.

"We get 70 to 80 people a month signing up for classes or consultations, but the number does shrink if we're talking about people who actually want to learn about Buddhist teachings."