From pizza by the slice to Adam Road nasi lemak 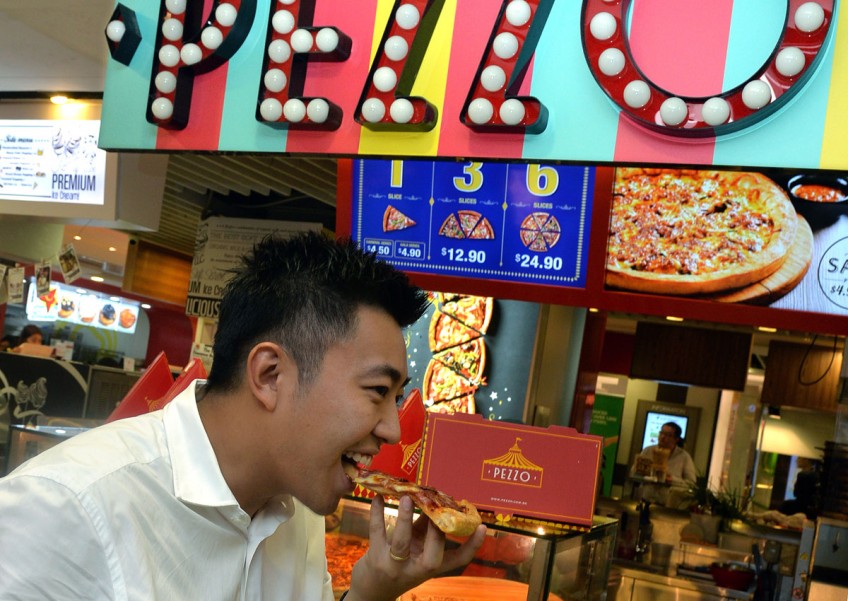 When it comes to party food, pizza usually ranks among the most popular options, given the ease of sharing it with a large group of people.

However, should the craving come while one is alone, the person needs an unusually large appetite to finish an entire pizza, or he would be out of luck.

This was the case in Singapore at least until two and a half years ago, when newcomer Pezzo started serving pizza by the slice from a food kiosk at ION Orchard.

"If you wanted to eat a slice of pizza by yourself before us, there are limited places you can go to," co-founder and director Chiang Zhan Xiang said.

Despite the many big players such as Domino's Pizza and Pizza Hut already in Singapore, Mr Chiang decided to venture into the market with a different concept.

"It's not a new idea, if you go to New York, pizza by the slices is on every corner," he said. With Singapore lacking major chains selling the product in a similar way, Mr Chiang seized the opportunity.

Since the first outlet opened in December 2012, the company has rolled out another 27 Pezzo stores - all corporate owned - in shopping malls across the island.

"When we started, the model was profitable," he said. "We invested money in probably the first five shops, and then more or less it was organic growth."

With high rental prices and a tight labour market, the company focused on building its presence in food kiosks, instead of restaurants. The food kiosk model has been more scalable for the company, with lower risks. Mr Chiang said: "I couldn't possibly open 20 restaurants in two years for sure."

Setting up a kiosk costs around S$100,000, with half of that coming from equipment that can be redeployed, he said. A restaurant would cost around S$1 million, with most of the cost locked in renovation and furnishings.

From the start, the company knew it had to expand rapidly in shopping malls to protect their position as a key player in selling pizzas by the slice. "It's about speed to market. You just got to open faster than (the competition)," he said, adding that malls provide "monopolistic protection", with landlords preferring variety in tenants.

Mr Chiang said: "It gives a fairly safe environment, because you hardly see two fruit juice stores together or things like that."

Since launch, revenue has more than doubled each year, with group sales expected to reach S$25 million this year.

In the beginning, the company faced challenges in staffing, as it lacked economies of scale. Things were especially tough when the company was neither too big nor too small, Mr Chiang said. Large companies are typically able to hire additional staff to be on standby, but when a company is smaller, that option is not available, he added.

"Probably the worst time (in terms) of manpower for us is over," Mr Chiang said. "I think when you are able to gain certain economies of scale, that's very important to companies, especially food companies, where you have collective purchasing power."

To take the company forward, Mr Chiang is focused on using more technology. "Technology has become more accessible, we have the ability to become a smarter company, by forecasting instead of manual counts and projections," he said, adding that newer systems can help boost sales.

"When you try and sell one slice, theoretically the system should prompt my staff to say have you tried selling three slices, because that's the magic of retail business," Mr Chiang said. "It's all about upselling."

Besides Pezzo, the group also has a restaurant chain, Miam Miam, which serves food inspired by French and Japanese cuisine.

"We have been quite popular actually, in fact we are opening our fourth store by the end of this year," Mr Chiang said.

However, the challenges of running a restaurant reaffirmed his decision to focus on growing new concepts in the kiosk space instead.

The group rolled out its second concept for kiosks last December, with a new brand, Stuff'd. The stores specialise in Turkish and Mexican food, with items including kebabs and burritos.

The famous Adam Road stall has been said to count the Sultan of Brunei among its loyal patrons. Last November, Prime Minister Lee Hsien Loong served the dish to Indonesian President Joko Widodo when the latter visited Singapore.

The Crave kiosks, which start operating this month, will sell nasi lemak prepared by staff from the popular hawker stall, as well as teh tarik in collaboration with Rafee's Corner from Amoy Street.

The new brands tie in with the group's plan to be kiosk experts.

Beyond Singapore, the group is looking to grow the Pezzo brand in the region as well. It currently has 14 Pezzo stores in Malaysia and one in China, and plans to continue expanding in these regions, Mr Chiang said.

"At the end of the day, if you do this correctly, it's just about regionalising it. And our first step of regionalising it is pushing the Pezzo brand already," he said. "In the next three years, if we can get these two markets right for our own corporate expansion, it would be very interesting for us."

With food kiosks being less common in foreign countries, the company has to consider renting larger spaces.

The company hopes to double its revenue in three years, with around half of its turnover to come from overseas markets by then.

"In other parts of the region, eating pizzas is actually a luxury, and I think Pezzo has the opportunity to sell the accessibility to people," Mr Chiang said. "We have a very good opportunity to bring slices to the masses."

This article was first published on September 17, 2015.
Get The Business Times for more stories.