Playing with jellies and ice cream 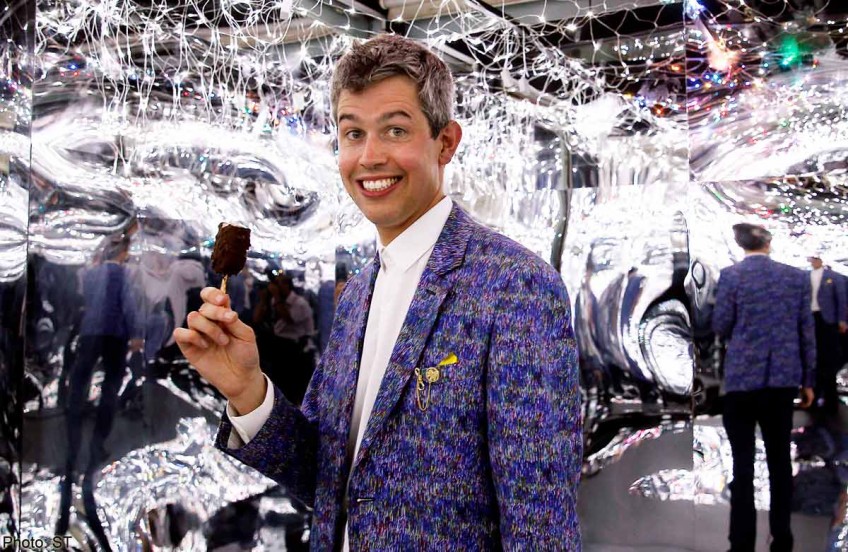 Eight years on, the food architects and cookbook authors behind Bompas & Parr have become builders of whimsical fantasy landscapes.

Think multi-sensory experiences such as apple- and strawberry-scented fireworks exploding with edible banana confetti on New Year's Eve; transforming the roof of London department store Selfridges into a boating lake with a waterfall; and setting a ship in 55,000 litres of lime jelly, the length of two Olympic-sized swimming pools.

More recently, Parr, 32, transformed Orgo Bar & Restaurant on the roof terrace of the Esplanade into a playground for adults, in conjunction with the launch of the new Magnum Infinity ice cream.

Themed around the Magnum Infinity concept of "long-lasting pleasure", invited guests walked through a tunnel filled with a chocolate-scented fog into a psychedelic space where they could slide down an illuminated tubular twisted slide and sit on Infinity Swings - both of which stood against the city skyline - as well as take photos in a mirror-panelled room.

On the inspiration for the playground, Singapore-born Parr says: "Ice cream is synonymous with having fun at the funfair and going to the park with slides and swings. When you're sliding down or in the air, the experience is heightened."

Guests also got a taste of four new Magnum creations in collaboration with Orgo. They are available at the restaurant until Aug 21.

The London-based pair are no strangers to such large-scale playful projects, having come a long way from their childhood days when they became buddies in the school orchestra.

In university, Bompas, 31, studied geography while Parr studied architecture. They bonded over a love of food and desserts.

While jelly may not be the most obvious or trendy ingredient to build a business on, Parr believes that people have a "nostalgia for jelly".

He explains: "As a child, remember the anticipation waiting for the jelly to set in the fridge? Plus it combines food and architecture and we used jelly to form buildings. Look at the colour, flavour and shape. There are infinite possibilities. We will never get bored of making jelly."

Although a plan to set up a stall selling jelly at London's Borough Market did not work out, in 2007, the duo already had a growing client base from the parties and events they did catering for.

In 2008, they created a jelly buffet for 2,000 people which involved illuminating the gelatin dessert with fibre optics and making tables to create wobbles in the jelly - complete with a special soundtrack for the event.

Parr says: "We thought to ourselves, 2,000 people are coming to look at jellies, so how do we entertain them? By triggering their senses."

The result was a jelly food fight that erupted at 11pm. Parr adds: "The whole place smelt of strawberries and people were eating the jelly, even the tasteless ones that weren't meant to be eaten. "And they said it was the best jelly they ever ate. You see, the whole experience tricks the brain into thinking the jelly tastes amazing."

While many of their installations are outdoors, Parr says they are used to working with the elements and goes as far as to praise Singapore's humid weather.

He says: "Food in Singapore is already great, but it tastes even better because of the high level of humidity which intensifies flavour. It's just like how eating by the sea or at the beach makes food taste nicer."

The intense research involved in their unique projects makes these modern-day Willy Wonkas a combination of sound engineer, food scientist, historian and builder.

Their office space includes a studio, kitchen for food testing, research lab and workshop for building art pieces. It also houses more than 20,000 jelly moulds they have made over the years.

While their creations sound similar to the fantastical foods made by British celebrity chef Heston Blumenthal, Parr emphasises that they are not trained as chefs and do not necessarily have to work with food-related companies.

Parr, whose 31-year-old wife is a theatre set designer, says: "We work on a larger scale and are less literal. Heston is more focused on what's on the plate. We build experiences that affect emotions and the body. Everything we do has a soundtrack."

As they constantly push themselves to working in new spaces and with various mediums, there is no limiting their creations.

The duo are opening a gin and tonic cloud bar next month in central London, something they first did in 2009 where visitors walked through a cloud of the vaporised cocktail.

Parr says: "What's next? Space tourism. What are people going to drink? We're working on how people can drink champagne in space."

This article was first published on June 8, 2015.
Get a copy of The Straits Times or go to straitstimes.com for more stories.