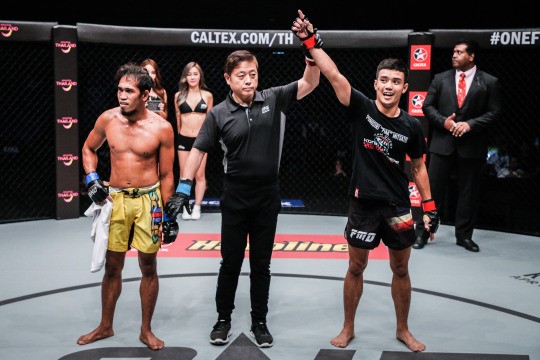 The Chiang Mai, Thailand-based strawweight kicked off the preliminary portion of ONE: WARRIOR KINGDOM on Saturday Night, 11 March, and delivered a first-round TKO to Rabin “The Rock” Catalan, much to the delight of his countrymen in Bangkok’s Impact Arena.

Though both men were tentative in the first minute of the bout, Catalan, a Philippine national wushu champion, quickly tore into his opponent with a couple of sharp combinations. Mitsatit, a Northern Muay Thai champion, responded with a powerful body kick that got his rival’s attention.

Catalan tried to take the crowd favorite to the ground, but “The Smiling Assassin” defended well, and clinched the Filipino with his back up against the cage. “The Rock” was persistent and finally dragged his unbeaten opponent to the ground, but Mitsatit landed in top position. Opting to stay on his feet, the Team Quest Thailand product held his nemesis’ legs and landed thunderous punches, but soon referee Yuji Shimada brought the action back to the feet after a brief lull in action.

Mitsatit, a product of Chiang Mai’s Team Quest Thailand, attacked the Filipino with blistering strikes. He connected with a slew of punches and a flying knee, but Catalan immediately clinched and was able to bring him back to the ground, this time with a trip takedown. Again, Mitsatit ended up on top, got back to his feet and waited for his visiting opponent to stand up. Once he did, the Thai attacked with a relentless barrage of crushing knees to Catalan’s midsection, which caused the wushu champion to falter to the ground. This time, he would not get back up.

Mitsatit rushed in with an unforgiving flurry of ground and pound until Shimada called off the fight at the 4:45 mark of the first round, awarding the hometown hero the victory.

With the TKO win, the Smiling Assassin improves to 8-0 and records his sixth TKO finish. Catalan, meanwhile, falls to 4-3.