Pop up and serve 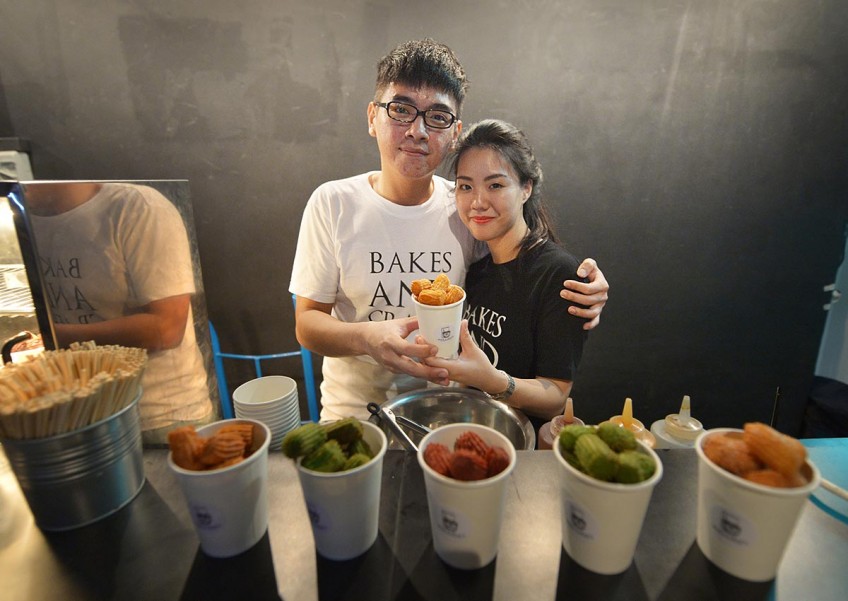 Besides clothing and jewellery shops, a new type of pop-up is becoming a fixture at weekend craft markets: the foodie stall.

They also have no fixed address. Instead, the owners, who range from university students to working adults in their 20s to 30s, prefer a nomadic lifestyle, setting up shop at festivals and pasar malams throughout the year.

One reason is because of the high rentals of a permanent premise.

Ms Monica Josephine, 28, who runs chilli brand Mofo Chili, says renting a booth is a "one-time investment" and "usually during weekends when traffic is high".

Having a permanent location, in contrast, means "worrying about hiring staff..., high rentals and renovation and utility bills", she adds.

Together with her sister, Ms Steffi Elvira, 26, she set up Mofo Chili, selling vegan-friendly homemade chilli sauce at weekend markets and online.

There are at least three weekend markets each month. They include regular ones organised by Public Garden and The Local People, which take place at various locations, or the monthly Market of Artists and Designers at the Red Dot Design Museum, and the quarterly Kranji Countryside Farmers' Market.

Moving around allows the pop-up stalls to reach different crowds.

Take, for example, roast pork specialist Uncle G's Handmade, which started out at farmers' market PasarBella in 2013 and has since been to the recent Singapore Night Festival and Kranji Countryside Farmers' Market. It is run by husband-and-wife team Kenneth Wong, 38, and Joey Liu, 33.

Mr Wong says: "When we pop up at an arts event versus a farmers' market, we meet different crowds."

For some, the pop-up model is one way to get their foot in the door while juggling a day job or studies.

For the owners of The Guilty Way, Ms Chen Xinyi and Ms Heng Li Jin, who are undergraduates at the National University of Singapore's Business School, selling at weekend markets gives them "an avenue to try a concept before moving on to launch a full-scale retail business".

They specialise in the macaron ice-cream sandwich, or macwich for short, and have sold at six markets since launching in May.

Using social media to build a following is a vital element for these new-age food vendors. Many of them use social media platforms such as Facebook and Instagram to inform customers about their next location or what is new on the menu.

Desserts stall Bakes & Crafts has amassed a following of 12,000 on Instagram since it started in 2013. Co-owner Crystal Cheng, 21, regularly posts photos of its offerings or of its booths at various markets. After renting a booth at the Geylang Serai Hari Raya Bazaar in June, Bakes & Crafts gained 1,000 followers over the month-long period as many customers took notice of the stall's newest offering - pandan and red velvet churros.

Ms Cheng adds: "People look at photos of our food posted by us or by others before coming down, so it helps create awareness."

But moving from one location to the next takes logistical planning. The vendors have to consider transportation as well as preparation methods, as they often have minimal power supply and a small space to work in. As a result, vendors tend to offer a limited menu, selling between one and four items.

But some F&B nomads, such as Mr Bobby Kee, 39, owner of tiramisu specialist Provi5ion, harbour dreams of having a space of their own one day. He says: "Customers have been asking me when I will open my own shop. It will be good, as tiramisu is a dessert that people want to enjoy in a comfortable cafe setting."

Some vendors have managed to make the transition to a permanent space, such as Soi 55, which sells Thai beverages. After six months as a roaming stall last year, they opened a permanent stall at Golden Shoe Hawker Centre and, later, at The Cathay box office.

Another successful business is The Quarters, which started as a pop-up shop under the name Durian Can Boleh before expanding into a full-fledged eatery at Tanjong Pagar. Besides its speciality of durian creme brulee, the restaurant serves modern Singaporean cuisine.

Owner Chung Deming, 34, says: "A brick-and-mortar business provides a location, personal touch and feel which a pop-up or online presence will not be able to provide."

Uncle G's owners have different ambitions: They want to pop up in other markets around the world.

Mr Wong says: "We'd like to meet new people and gather reviews and inspiration to better our craft."

The lack of a fixed location has not turned away customers, as some have become loyal followers who track the movements of their favourite stalls.

Accounts manager Niki Torres, 29, just cannot get enough of local fusion stall Phat, having visited the roving stall at least five times since it started in March. She says: "I really just go to the markets to eat. Phat comes up with exciting flavours that I haven't tried elsewhere."

Phat's co-owner Ms Ilya Noor has mixed local and Western flavours to come with fusion dishes such as The Snoop Dog, a hot dog topped with shredded chicken, doused in "lemak chili padi" gravy and topped with homemade sambal ikan bilis and peanuts.

Meanwhile, civil servant Keith Wong and his wife are so hooked on Uncle G's Handmade's signature crispy roast pork that they have patronised the stall at least 10 times and also ordered the meat for private functions.

The 31-year-old says: "Going to markets like this gives us a chance to try different types of food versus just visiting one eatery. You can tell that the food vendors are very passionate about their trade and it's not just about the money."

With names such as Dodge The Bullet and Final Destination, expect some explosive flavours in the range of vegan-friendly fried chilli created by a pair of Indonesian sisters who are based here. Ms Monica Josephine, 28, and Ms Steffi Elvira, 26, say they have been eating chilli since they were toddlers.

Their products, which can be used as a dip, marinade or sauce, are made with chillies from Manado in Sulawesi, which they say pack a stronger, spicier punch.

Available in 200g jars are the milder Dodge The Bullet ($10) and Final Destination ($12), which is twice as spicy. There are also 45g jars of chilli powder, Mofo Gunpowder ($6).

Besides being sold at flea markets and festivals, the products are available online on their website and multi-label retailer Naiise.

Catch them next at: Market of Experiences x AndSoForth, 16D Lorong Ampas, Nov 7, 11am to 8pm

This stall sells just one thing: the macwich. Short for macaron ice-cream sandwich, macwich is the creation of university schoolmates Chen Xinyi and Heng Li Jin, both 22, who combined their two favourite desserts-macaron and ice cream - into one sweet treat.

Slightly larger than an average-sized macaron, the macwich ($5.50) is available in 10 ice-cream flavours, including vanilla ripple, double choco chip and mango tango.

The ice cream is sourced from a local supplier, while they either bake the macarons or order them from other bakers for large orders, typically for private events.

Plans are under way to introduce other desserts too.

Catch them next at: Upcoming MovieMob outdoor drive-in movie events next month. Check their social media pages for updates.

With her parents running a nasi padang business, food has always occupied a central place in the life of Phat co-founder Ilya Noor, 25. In March, along with partner Pang Chew Theng, 25, she realised her dream of opening a street food stall that combines local and Western flavours using halal ingredients.

For example, The Snoop Dog ($7) is a hot dog topped with shredded chicken, doused in "lemak chilli padi" gravy and topped with home-made sambal ikan bilis and peanuts. Tato' Bomb ($3.50) is bergedil (potato cutlets) stuffed with mozzarella cheese and served with homemade roasted garlic sambal aioli, and Phat Red ($6) is handmade Cornish pasty filled with chicken and potatoes that have been coated in ayam merah (spicy tomato chicken) sauce.

Although Phat has seven items on its menu, typically, only three to four are sold at events.

Catch them next at: The Barter Market,The Substation alley, 45 Armenian Street, date to be confirmed

Tiramisu specialist Provi5ion was born out of a romantic gesture by owner Bobby Kee, 39. Knowing that tiramisu was his girlfriend's favourite dessert, he made one for the first time seven years ago and has not stopped experimenting with the Italian dessert since.

He set up Provi5ion last year after quitting his advertising job and enrolling at a culinary school.

Plans are in the works to expand the menu beyond tiramisu, though Mr Kee would not reveal more.

The stall started in 2013 as a pushcart in Temasek Polytechnic selling cookies and brownies. Behind it are alumni Crystal Cheng, 21, and her boyfriend, Mr Tan Zi Yao, 21.

Since then, their menu has expanded to include jar cakes, cartoon-character macarons and, recently, after a trip to Spain, churros. After testing various flavour combinations, they now sell bite-sized churros in three flavours: original, red velvet and pandan - with a gula melaka dip ($5 for a cup of about 12 pieces).

They sell either churros or macarons exclusively at events, so check their social media pages before heading down.

The married couple behind Uncle G's Handmade, Mr Kenneth Wong, 38, and Ms Joey Liu, 33, love all things to do with roast pork.

After all, it took them two years of research and trial and error to attain the ideal taste and texture of their signature item, crispy roast pork ($5 for 100g).

To keep things fresh, they do not have a fixed menu when selling at markets, though there are usually one to three items. These include porchetta stuffed with homemade sausage and a sous vide egg ($15); crispy roast pork with garlic sriracha yoghurt and couscous ($8); and miso rice burger with lotus and purple potato chips ($5).

When The Chief SG started in May last year, it was a pop-up stall selling coffee on the go.

But lugging around a 30kg coffee machine to markets in various locations took its toll on owner Mohamed Dino Shafique, 30, who decided to sell Malay fusion food instead at flea markets and festivals.

His menu includes items such as satay in a cup with aioli ($8), beef rendang roll topped with Parmesan ($8) and goreng pisang with gula melaka and coconut sprinkles ($5).

He still sells coffee, but only at private events.

Catch him next at: Noise Singapore Art Market, The Foothills grass patch at Fort Canning Park, Oct 30 and 31, 5 to 11pm

Dissatisfied with the standard of Thai iced milk tea sold here, Iceburnz founder Miza Nazili, 21, decided to take things into her own hands and come up with a more authentic version of the popular beverage, along with the help of her cousin, Amirul Amsyar, 18.

After testing nine recipes before getting it right, Iceburnz's Thai iced tea is said to be milkier and less sweet than other versions sold in Singapore.

The duo expanded the idea and set up a stall selling other drinks such as coconut shake ($3.50) and Nutella and Kinder Bueno milkshakes ($5 each).

Unlike most pop-up food and beverage businesses, they prefer to set up shop at pasar malams instead of flea markets because they consider pasar malams synonymous with street fare.

This article was first published on October 9, 2015.
Get a copy of The Straits Times or go to straitstimes.com for more stories.