Popular kindergarten to stay on at Dempsey Hill 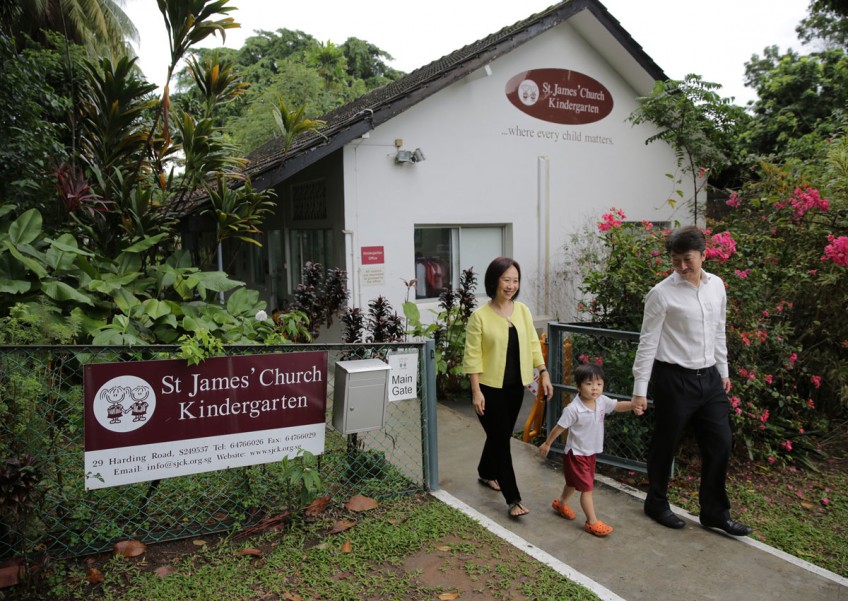 The St James' Church Kindergarten (SJCK) near Dempsey Hill, which was due to close next year, has managed to keep the site and will remain there till 2022.

The nine-year lease for the non-profit kindergarten's premises in Harding Road - which can take almost 900 pupils and is one of the largest here - was to have ended in December last year.

But in 2013, SJCK received an extension until 2016, after it appealed to the Singapore Land Authority and pupils' parents submitted a petition with 850 signatures, pleading for the pre-school to remain.

When the property was put up for rent by the Singapore Land Authority by public tender in August this year, SJCK submitted a bid and learnt last month that it was awarded the site, under a tender process that was revised in November 2013.

It outbid brand-name commercial pre-schools, including Pat's Schoolhouse, Odyssey The Global Preschool and EtonHouse International. The new lease starts in 2017.

Under the revised tender system, the quality and affordability of the pre-school operator's programmes are considered with other factors, including the tendered price.

Its "quality score" - which includes components such as affordability - of 48 was also the highest.

SJCK took part in the tender even though it had found a new home in Gilstead Road to move to. It won the tender for that site last year. The Gilstead branch opens in January and can admit about 800 pupils.

Its branch at St James' Church in Leedon Road is operating at full capacity of 360 pupils.

SJCK senior principal Jacqueline Chung told The Straits Times that the pre-school was keen to remain in Harding Road.

She said: "We've been here for 10 years. There's a lot of attachment to this place... It's surrounded by nature and it's so large that there's so much potential for all sorts of little projects to develop."

Despite the steeper rent it would have to pay - about 2½ times the amount it now pays - Dr Chung said: "The small comfort is that we can continue in the same property without spending more money on the facilities."

When SJCK moved into Harding Road in 2006, it spent $500,000 to remove termite-infested partitions, repair the damaged roof and build basic facilities. Another $500,000 was spent over the next seven years to create play facilities.

Harding Road's fees in 2017 will rise by between $50 and $70 a month for most children. But Dr Chung assured parents that fees will "always be significantly below the market median".

With about 300 parents already expressing interest to enrol their children at the Harding Road branch in 2017, some parents may not mind paying higher fees.

Private tutor Gene Tan, 38, has three children aged two to six, with the youngest due to enrol next year.

He said: "I'm willing to pay more, to have all three children go through pre-school there. The site has a lot of greenery and is spacious; very few church kindergartens have such spaces. It'd have been a pity if SJCK built it up and then lost it."