A premium experience on offer 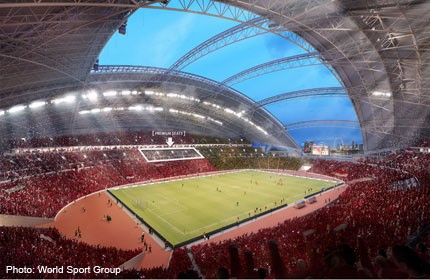 SINGAPORE - Purchase a premium seat at the new 55,000-capacity National Stadium, and there will be no need to rush for a good seat or search for a parking spot.

The new stadium, the centrepiece of the Sports Hub which is slated to open in April 2014, will have 1,655 premium seats, located at the centre sections of the North and South wings of the stadium.

Members of this hospitality programme will have first option to purchase tickets to events at the stadium.

They will also be able to view the action from padded seats with armrests, have access to a lounge, a members-only carpark area and be able to enter the stadium via a private entrance lobby.

Adrian Staiti, WSG's senior vice-president (Global Partnerships and Stadiums & Arenas), said yesterday that he hoped the membership would be ideal for hospitality opportunities among businesses and small and medium enterprises (SMEs).

He said: "The Premium Seats membership offers businesses, SMEs and individuals the unique proposition of a guaranteed spot in a prime location at the National Stadium.

"It's a great way for businesses to interact and entertain their customers.

"Every new stadium in the world has a similar programme in place for that very purpose."

The Sports Hub offered up 62 executive suites at the National Stadium last September.

Following from the healthy demand, Staiti is optimistic the premium seats will meet with a similar resounding response.

Events such as the Asean Football Federation Suzuki Cup and Women's Tennis Association (WTA) Championships (2014 to 2018), top-level European football matches and rugby action are expected at the $1.33-billion Sports Hub after its opening next year.

The seats, which require a three-year commitment with a fixed four per cent increment year-over-year, are transferable.

If a member opts not to purchase tickets to a specific event, the seat will then be released to the public.

Staiti said ticket prices for concerts and football matches held at the new stadium are not likely to be much higher than usual.

He said: "The event promoter sets the ticket prices, whether it's a concert or a football match. "I think we will see ticket prices in the same range as it is now. I don't see why it would be any different.

"Promoters will set prices based on market demand and will always strive for a packed stadium."