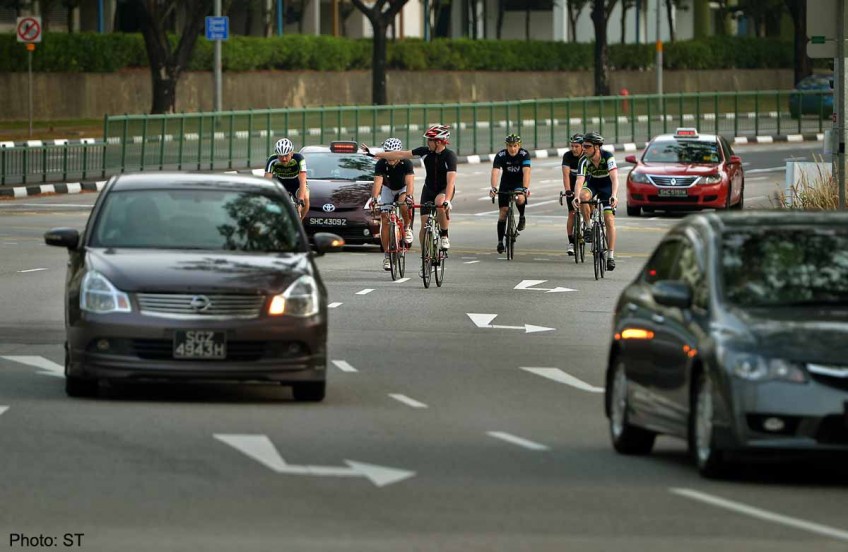 A video of a large group of cyclists seemingly road hogging along Sengkang East Drive has not just been making the rounds, but has also caught the eye of the authorities.

The police told The Sunday Times that they are "looking into" the incident and have asked anyone with information to come forward.

The 50-second video has also led to a debate on whether such mass cycling should be regulated more tightly.

Filmed from the front and rear in-vehicle cameras of a car, the video, taken on Feb 28 and posted on Facebook earlier this month, shows a group of about 40 cyclists on the two left-most lanes of the road.

They then filter right, but the group is so large and strung out that they block three cars which are trying to switch lanes to turn left.

At one point, the cars are forced to come to a near stop, to wait for the cyclists to pass.

"The cyclists were reckless," said motorist Fairuz Din, 33, after watching the video. The aircraft technician feels that either the size of cycling groups should be controlled, or such large groups should be allowed on the roads only in the wee hours of the morning or late at night.

"If they are in such a big group, they will use up one lane, and drivers will need to wait and slow down. If they have escorts, at least they can control the group," said Mr Li, who is self-employed.

At the moment, there are no rules restricting the size of the group cyclists can ride in.

But cycling clubs The Sunday Times spoke to said they try to keep their groups small so situations such as that in the video do not arise.

Anza Cycling, which has about 400 members, said that it tries to keep the size of its groups to roughly the equivalent of a medium-sized lorry.

"By doing so, we are able to establish more visibility and hence a safer presence on the road, without unduly impacting surrounding road users," said the club's president Megan Kinder in an e-mail.

Ms Joyce Leong, founder of the club Joyriders, which sometimes has close to 200 riders turning up for Saturday morning rides, said groups would be broken up into smaller "trains" of 10 to 12 riders.

"Each train will have five or six regular leaders, who act like marshals. They will control and make sure everyone in the group behaves safely," said Ms Leong. Mr Francis Chu, co-founder of LoveCyclingSG, said that even if there were restrictions on the size of groups, it would be hard to enforce, especially on routes such as Sengkang East Drive that are well frequented by cyclists.

"A few groups could meet on the road and get together, and incidentally form a big bunch of riders," said Mr Chu.

Mr Chu said that as more Singaporeans take to bicycles, large groups would be inevitable.

"Road traffic is like that, it's very dynamic. Sometimes at certain places there are a lot of cars, but nobody says anything. Everyone should live and let live."