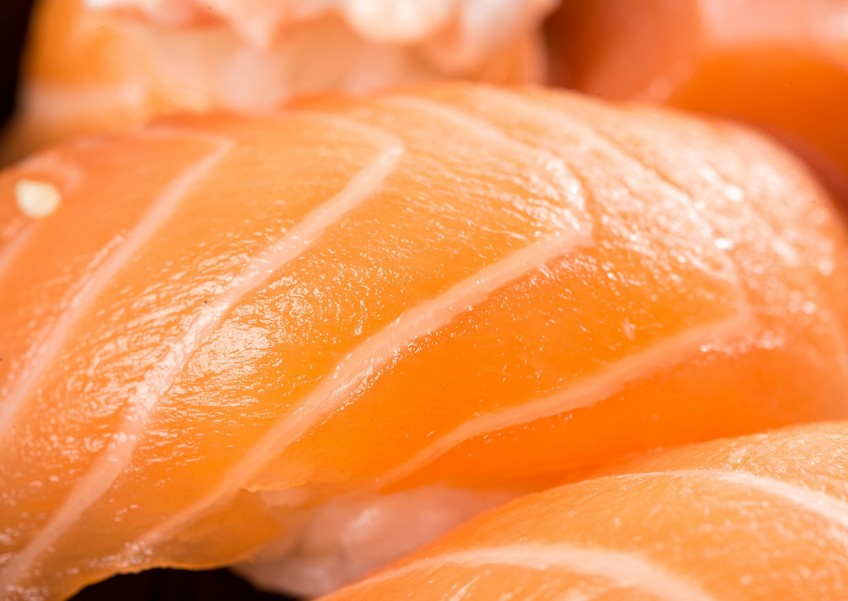 Despite its popularity as a sushi topping, salmon is a relatively new ingredient for sushi, as it was rarely eaten raw or seen in sushi bars in Japan until the 1980s.

Because the quality of Pacific salmon that was available to Japan then could only be served grilled, fried or smoked, as it was not of the quality that could be eaten raw, the main option for sushi and sashimi then was tuna.

Things changed in 1985, when a Norwegian delegation known as Project Japan, headed by Thor Listau, then Norwegian Minister of Fisheries, went to Japan, armed with Norwegian farmed salmon.

The Norwegian salmon is different from its Pacific cousin, contains more fat, and most importantly, is free of parasites, making it ideal for fresh consumption.

According to Jon Erik Steenslid, regional director of South-east Asia for the Norwegian Seafood Council, Norway now exports about 33,000 to 34,000 tonnes of salmon to Japan annually.

"Japan has become a big market for us," he says, despite its lukewarm reception, back in the 1980s.

Norway produces about 1.3 million tonnes of salmon annually which is equivalent to 55 per cent of the world's production of farmed salmon. The salmon that is exported to Japan is mainly in the form of whole fresh fish or in fillets. These are sold at Tokyo's Tsukiji market, at restaurants and supermarkets.

Mr Steenslid says that among the young generation of Japanese, "salmon is their top choice for sushi, having grown up eating it". The older generation, he admits, is harder to convert, since they are more used to traditional sushi toppings which don't include salmon.

He adds that the Japanese are the biggest consumers of salmon, which they eat mostly in its cooked form.

On Nov 25, the Norwegian Seafood Council, together with the World Sushi Skills Institute of Japan, will be holding the inaugural Global Sushi Challenge 2015.

"The aim is not only to identify talented chefs skilled in sushi making but also to promote the principles of hygienic handling of fish and seafood to safeguard their quality of being enjoyed raw," says Mr Steenslid.

For example, Norwegian salmon requires special handling, such as storing it between zero to four degrees Celcius to keep its fatty texture and creamy taste.

There are 14 countries taking part in this competition, including Taiwan, Indonesia, the US, Germany and Japan.

Singapore is represented by chef Damien Tan, from Hide Yamamoto at Marina Bay Sands. He was selected from a competition where 15 chefs from restaurants and hotels took part in two rounds of sushi making.

The competition will be judged in two categories: Edo Mae Sushi, which is the traditional style sushi, and Creative "Free Style" Sushi, where the chefs present their own creations. The overall winner will go on a three-day tour to visit top sushi restaurants and to meet chefs in Tokyo. The council hopes to make this competition a regular event.

In Singapore, it is also creating recipe cards, so that consumers can better enjoy the fish. "Salmon is a versatile fish, so you can eat it raw, fried, baked, smoked and salted … how best to enjoy it is really up to you," says Mr Steenslid.

This article was first published on November 20, 2015.
Get The Business Times for more stories.