The proposal that went viral 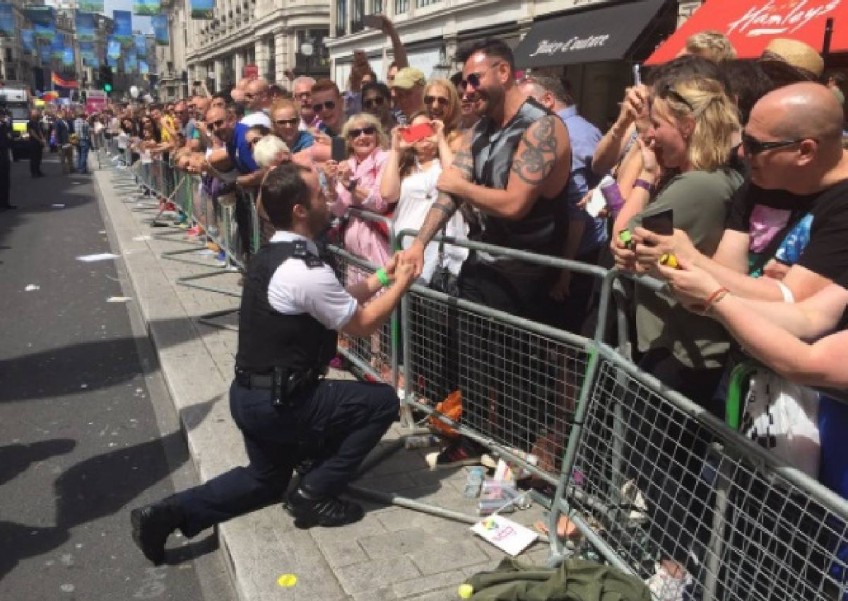 After an image of kissing policemen was shared around the world, Kelly Grovier looks at a street artist's famous mural.

Imagine a riot in which masked agitators hurl bouquets of flowers instead of bricks and molotov cocktails. Imagine a war zone where armed soldiers are detained by little girls in dresses who confiscate their weapons.

Imagine, in other words, a world in which the graffiti visions of the mischievous street artist Banksy are no longer wry social satire but depictions of things as they are.

Anyone tuning into social media over the weekend will have witnessed such a transformation.

An intimate embrace between two male police officers that was captured during the Pride Parade in London on Saturday (photos and videos of which have since gone viral on Twitter and Facebook) has, in effect, superseded the impact of one of Banksy's most famous images.

Characteristically ambiguous, Banksy's mural assumes a sense of shock on the part of passers-by, as if suggesting that such affectionate behaviour is as incongruous for police officers as the throwing of petals would be for hooded hooligans.

The video clip of one policeman proposing marriage to another in front of thousands of parade spectators (and of their amorous kiss in celebration afterwards) has been viewed more than 14million times.

The images have gone viral at a moment when the news is dominated by stories of accelerating intolerance towards minority groups - from the massacre at a gay nightclub in Orlando, Florida two weeks ago to a rise in hate crimes against foreigners reported in the UK following the outcome of the EU referendum last week.

Amid such social tumult, society's perception of the police - the force responsible for maintaining order - is itself intriguingly in flux.