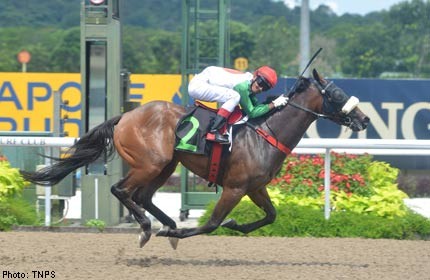 SINGAPORE - A copybook ride from apprentice jockey Zuriman Zulkilfi saw the Bruce Marsh-trained sprinter HYPERNOVA finally break through for his first win at Kranji on Sunday.

The four-year-old gelding did show glimpses of potential at his three previous runs. But if his two barrier trial wins, especially his second one when he drubbed the field by more than six lengths, were taken into account, then his performances under racing conditions had been a touch below par.

But his solid last-start second to Faaltless a fortnight ago, when the blinkers were dropped and replaced with just pacifiers, did suggest such untapped potential was about to rise to the top - and it sure did in no uncertain terms in yesterday's $65,000 Initiation Division 1 race over 1,200m.

Sent out as the second favourite after trainer Laurie Laxon's much-vaunted newcomer EURO ZONE - who also had the Joao Moreira factor to explain his odds-on price of $8 - Hypernova was cuddled along by Zuriman as he tucked into the perfect trail in third spot, while quick beginners Euro Zone and Flutz (Jose Verenzuela) traded the lead up front.

As expected, the two warring pacemakers could not sustain their runs once they straightened up. Zuriman cleverly waited for that moment to angle Hypernova into the clear, and the end-result was a blinding acceleration from the son of Elusive City, which extended into a facile four-length victory in 1min 11.93sec.

Marsh was clearly rapt he had been able to get a win out of Hypernova, especially after the promise the Tudor Lodge Racing Stable-owned galloper showed at his pre-debut trials.

"We probably got a bit carried away at the way he trialled, but then, he was too keen for his own good in his races," said the Kiwi trainer.

"That was why we dropped the blinkers as he was overracing with them on, and replaced them with pacifiers. That seems to have worked out.

"He can really gallop and the good barrier - he jumped from Gate 1 - also made it perfect for him. Joao's horse (Euro Zone) was bound to lead and it was always the plan to take a sit behind.

"He was produced too soon at his previous starts, but today, he was ridden more patiently and he won well in the end.

"I don't have any ambitious plans for him at this stage - just take him through his grades and we'll see how he progresses."