Racing: It's been a golden season so far for O'Hara 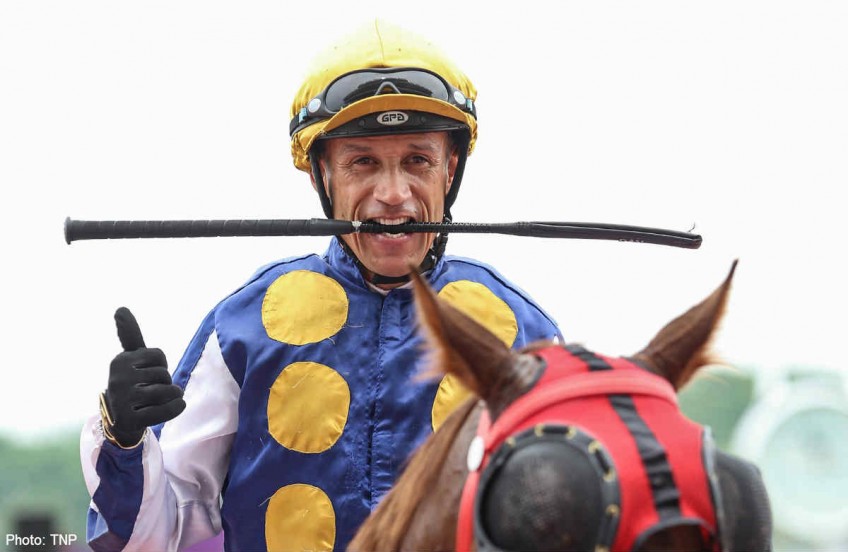 Riding a wave of positivity following his Emirates Singapore Derby win last Sunday, trainer John O'Hara is targeting his best ever season at Kranji and will turn to another potential star in his yard to continue his winning run.

The Singaporean handler will saddle the up-and-coming GOLDEN BRILLIANT in today's $80,000 Kranji Stakes C race over 1,200m as the US-bred chestnut aims to extend his red-hot streak with a fourth consecutive triumph on the turf.

"He's trained on nicely since his last start (an impressive Graduation Stakes win on June 22 despite having to jump from the outermost stall) and I actually thought he was ready and it was the right time to step him up to 1,400m," said O'Hara.

"But that Progress race was cancelled so I had to keep him on the 1,200m instead. It's slightly stronger company than what he's faced but it's not overly tough and I think he'll run a good race."

Jockey David Flores has saluted twice aboard Golden Brilliant and will be in the irons again this weekend, as his mount lines up in a small field of just seven runners that include some handy sorts like Strubeli and Xin Treasure.

"He's gotten a lot more matured and while he's still a little bit naughty in the barriers, it's a lot better now," said the Mexican-born hoop, who is eighth on the jockey's log with 22 wins. "He's still improving with every race and I'm expecting a good run from him."

With three victories this year, the Mr Greeley three-year-old has been one of the main contributors to O'Hara's haul of 20 winners and has been one of his standout performers, alongside his flagship horse Spalato, a four-time winner in 2014 and winner of the Group 1 Patron's Bowl and of course last week's Derby.

"It's been a fruitful season so far and getting my first two Group 1 wins has really been an added bonus," said the 50-year-old, who remains on track to surpass his personal best tally of 39 winners achieved in 2012.

The 40-point mark is a realistic target he added. "I think we can get there."

While etching his name into the record books with his maiden Derby title was an important milestone for O'Hara, who before this year had managed two other feature race triumphs in the Group 2 Stewards' Cup in 2010 and the Group 3 Kranji Sprint in 2011, both with Ghozi, the former assistant-trainer to Malcolm Thwaites and Charles Leck is not one to rest on his laurels.

"Winning the Derby was great for the morale in the stable and the boys were happy about it but things are back to normal now.

"We're focused on looking ahead and not back on what we've accomplished," he said. "We still have a lot of work left to do."

Following his exertions in taking out the last two legs of the Singapore Four-Year-Old Challenge, Spalato has been sent for a well-deserved break.

"He pulled up fine after the Derby but I'm going to send him for a short spell now to recover and rest," said O'Hara, while preferring to remain non-committal about his intentions for his star Elusive City four-year-old.