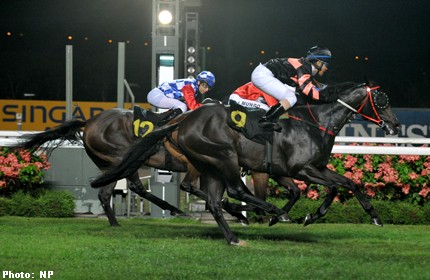 Apprentice Tengku Rehaizat will be renewing his partnership with King Empire (outside) in the Penang Sprint Trophy in Race 7 on Sunday.

Former Kranji galloper King Empire has had two beneficial starts in Malaysia and is set to capture the RM500,000 ($200,000) Penang Sprint Trophy in Race 7 on Sunday.

Although the field looks a bit open, the five-year-old's Kranji record stands him in good stead in the Malaysian Group 1 feature over 1,400m.

The three-time winner, twice over the 1,400m, ran an eye-catching second in the Singapore Group 3 Saas Fee Stakes over 1,400m last October, two runs before he was sent across the Causeway.

His conqueror was Ato, who had won the $1 million International Group 1 KrisFlyer International Sprint over 1,200m in May last year.

Ato clocked a swift 1min 21.96sec in the Saas Fee Stakes and King Empire lost by only 1¼ lengths after being held up during a crucial part of the race.

King Empire finished second in his Malaysian debut and was a creditable fifth in his next start. Both were over 1,400m.

With the two runs under his belt, he should be spot-on to win his first race up north.

Last season's top Singapore rookie Tengku Rehaizat, who scored once on King Empire, is making the special trip up to ride the horse, who is beautifully drawn in gate 1.