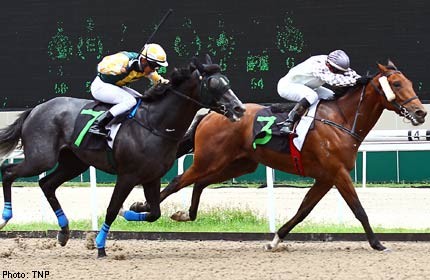 SINGAPORE - Two horses, who had showed promise of early success, came through in their fifth and sixth starts respectively - but not without some help from the jockey of the day, Manoel Nunes.

INSPIRE, yet to start paying for his feed after four Singapore starts, delivered the goods in the second event. Two races later, and after going winless for five starts. DR OCTOPUS finally saluted.

And the common thread running through the eye of both wins was the jockey.

The "other" Brazilian, as he is known in local racing circles, was astride both horses in their maiden wins.

Indeed, Inspire and Dr Octopus provided Nunes with the second and fourth of his five wins for the day. He had taken the opening event on the Sam Chua-trained AMERICAN VISION and the third on the well supported BOURBON GOLDMAN, prepared for the races by ZL Mok. His fifth winner was in the last when he piloted JOYOUS EXPRESS to a come-from-behind victory.

Just for the record, the other Brazilian plying with trade with tremendous success in Singapore is Joao Moreira. But he missed the meeting as he had riding engagements in England where he was part of the Rest Of The World team on Shergar Cup Day at Royal Ascot.

In his absence, Nunes picked up the gauntlet - and what a huge show it was. He had come into the day's racing after taking a tumble on Double S in that last-race mishap on Friday night which saw Ivaldo Santana injured when dumped from Miracle Bay, who broke his near-fore fetlock in the incient and had to be euthanised.

Santana gave up all his rides on Sunday.

Back to the maidens who shed their status, it was fitting that both finally greeted the judge. Inspire had been knocking at the door and, in his last three outings, he finished just behind the placed horses.

As for Nunes, it was good payback. He had kept the faith with the four-year-old from trainer Michael Clements' yard and had ridden the son of Keeper in all his previous races.

Inspire, who had two horses behind him in the back stertch and only made his move when they turned for home, paid a healthy $31 for the win. He beat race favourite VERGALATICA by half a length. Early frontrunner, CALLIDE RIVER, took third.

In the case of Dr Octopus, Nunes was again content to bide his time and only hit the front once the top of the straight was reached. With the finish in sight and few challangers out to make it messy for him, Nunes rode hands and heels to steer the Mark Walker-trained to an easy one and three quarter length win.

For Walker, who came into the meeting with just one winner more than Michael Freedman in the Trainers' Premiership - 46 to 45 - Dr Octopus' victory gave him a bit more breathing space on top of the heap.

Sent out as top fancy with racing fans, the three-year-old paid $13 for the win and $6 for the place.

Trainer Shane Baertschiger was another who blew out his cheeks in relief when BIGCAT RHAPSODY opened his Kranji account with a good win in the sixth event.

Ridden by top apprentice "Harry" Kasim, Bigcat Rhapsody was kept on a snug hold and in second spot all the way down the back stretch. As they turned for the run home, jockey M Zaki, a frontrunning "specialist", waved the white flag on Sky Protege.

It was a sign for Bigcat Rhapsody to get going. That he did and, urged on by a few cracks on the rump, he lengthened strides and easily held off the fast-finishing GARRATTA KID.

Sent out on the third line of betting, he rewarded his backers with a $29 payout on the win.