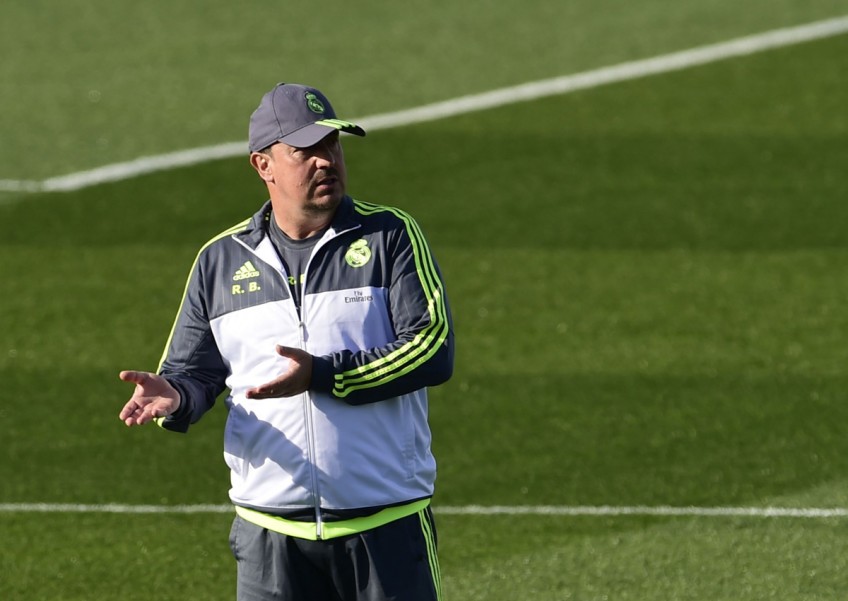 Coach Rafa Benitez will write his own obituary if he plays it safe in El Clasico.
AFP

At Inter Milan, Chelsea and now Real Madrid, he's (left) the coach who tries too hard to fill the shoes of an enigmatic predecessor and make friends with the surly stepchildren.

Each appointment comes with a sell-by date. The ticking time bomb begins as soon as he puts pen to paper. He's always one game from outright contempt and two games from the sack.

He's a walking obituary waiting to be written.

The knives were drawn in pre-season in Madrid. A Clasico defeat in the Bernabeu tomorrow morning (Singapore time) will be the excuse to stab Benitez in the back. He's an honourable man surrounded by self-interested politicians more experienced in Machiavellian warfare.

Perez picks the Galacticos and the coach of the day accommodates them, creating a longstanding problem with the equally immovable Cristiano Ronaldo.

When Karim Benzema was out injured, Benitez was left in the invidious position of putting his preening prima donna in a position he didn't want.

Ronaldo is adamant that he's only a winger, blessed with those omnipotent pistons to cut inside and drive a route to goal. Benitez disagreed.

So Ronaldo has played up front under protest, pouting on the pitch and flirting with Paris St Germain officials.

Benitez isn't cut out for such shenanigans, unable to placate Perez or match the popularity of the fatherly Carlo Ancelotti.

Most of all, he cannot pacify the incessant demands of the Madristas, the puritanical idealists who loathe his safety-first tactics.

Initially, Benitez got away with it. His innate defensiveness was covered by solid results and an injury crisis.

Until last week's defeat by Sevilla - his first in all competitions - Real had the best defensive record in Europe, a feat achieved with a back four mostly cut and pasted together from spare parts.

As the walking wounded returned, Benitez reverted to a more attack-minded approach, but the move came across as haphazard and half-hearted.

The strange 4-3-3 against Sevilla last week was neither here nor there, half pandering to the attacking zealots and half pleasing Benitez's conservatism.

Benitez accommodated a half-fit Bale in a position to which he is entirely unsuited because Real's most powerful player refused to take on No. 9 responsibilities.

When it became clear that the situation was untenable, with both Ronaldo and Bale foundering, Benitez withdrew Isco - who had been the best forward on show - and replaced him with Rodriguez, whose current form deserves the nod ahead of Bale.

Confused? So are the Madristas who raged against the manager.

Where Ancelotti appeared to revel as ringmaster, Benitez comes across as a circus clown, unable to avoid the banana skins deliberately left behind by others.

Critics might be willing him to fail, but he hardly helps his cause. Real play only for the win. They rarely play to the crowd.

In midfield, Casemiro defines his coach's caution. The Brazilian plays belligerent nightclub bouncer. He lets no one enter. He delights in smashing the canvases of passing artistes. He is the definitive Benitez enforcer, but the antithesis of Madrid's philosophy.

Patience is wearing thin for a side that features Casemiro, but leaves Rodriguez on the bench and Benitez is now out of excuses to keep up the conservatism.

Bale, Rodriguez, Benzema and Modric are all back for a Clasico that Barcelona can afford to draw, but Real cannot lose.

If Benitez opts for a defensive approach against Barcelona, irate Madridistas will show him the true meaning of attack.

This article was first published on November 21, 2015.
Get The New Paper for more stories.