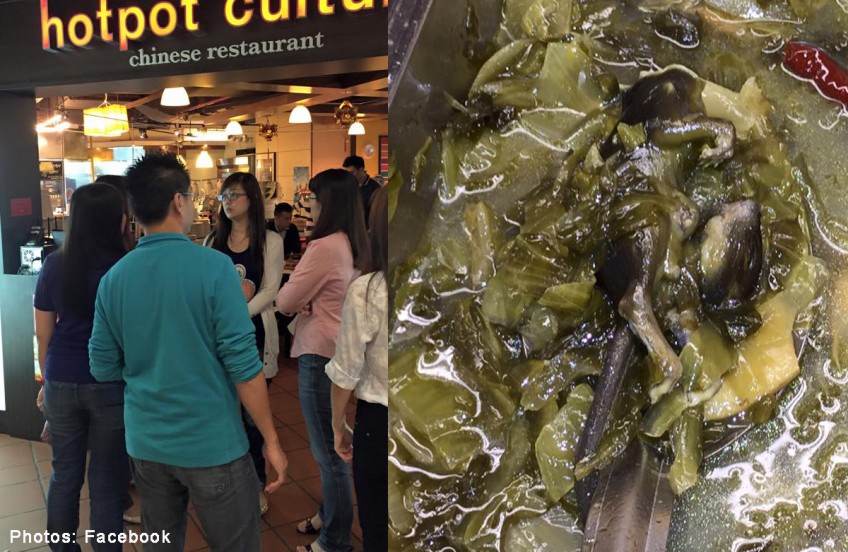 UPDATED: Stomp reader Fabian notified Stomp about a Facebook posting showing a rat in a dish of vegetable at a Chinese restaurant.

Stomp managed to track down the customer, CC, to find out more about what happened.

CC came across the disgusting sight at a Chinese restaurant today (9 Jan) at 12.20pm.

She was having a buffet lunch at Hotpot Culture in Marina Square with some friends when they came across the carcass of a rat in a food tray of salted vegetables.

The group alerted a member of staff, who then asked another employee to replace the tray.

Said CC when Stomp spoke to her over the phone: "The staff looked shocked after seeing the rat.

"I am not sure if manager was aware of what happened at that time."

The buffet then resumed after the dish was replaced.

Some of the restaurants customers had already consumed the vegetables before CC came across the rat.

Others who knew about the shocking discovery refused to pay for the buffet but still had to do so in the end.

CC also reported seeing a commotion between some customers and the restaurant's staff.

After they were horrified by the sight of the carcass, CC and her friends told the manager that they did not want to pay for the meal.

The manager apologised to the group and did not ask for payment.

A woman sitting beside them however was not so lucky. She had to pay for the meal even though she was aware about what happened.

Both the woman and the Stomp reader have reported the incident to the National Environment Agency (NEA).

CC continued: "The staff should have stopped the buffet line.

"I called NEA to tell them what happened. They will be sending officials to investigate the matter."

Photos of the incident are currently circulating on Facebook.