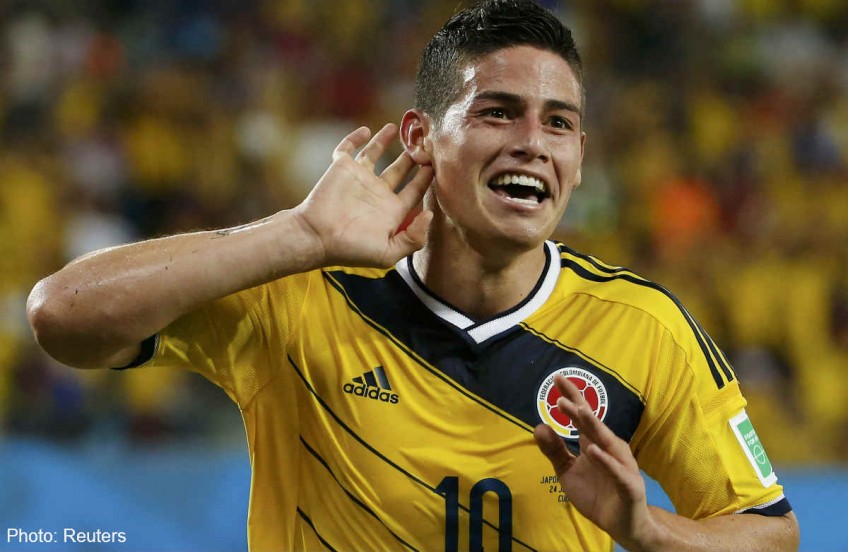 MADRID - Real Madrid have signed Colombia midfielder James Rodriguez from Monaco on a six-year contract, the La Liga club said on Tuesday. "Real Madrid and AS Monaco have reached an agreement for the transfer of James Rodriguez that will see keep him at the club for the next six seasons," Real said in a statement on their website.

The World Cup's Golden Boot winner with six goals, who will be presented at the Bernabeu later on Tuesday, is Real's second major signing of the transfer window after Germany midfielder Toni Kroos from Bayern Munich.

No details of the fee for Rodriguez were disclosed but media reports said it was around 80 million euros (S133.7 million).

Rodriguez, 23, first came to Europe in 2010 after signing for Porto and won the Portuguese league three years in a row before joining Monaco last year.

His performances for Colombia at the World Cup prompted a move by Real for Rodriguez who pushed Monaco for the chance to play for the Spanish giants.

"AS Monaco is proud to have helped James Rodriguez reveal his talent to the world as he notably made his mark on the 2014 World Cup in Brazil winning the golden boot" Vadim Vasilyev, Vice-Chairman and CEO of Monaco, said in a statement.

"James is a fantastic player who achieved great things with AS Monaco. The Club had no intention to sell the player, however the time came when the solution of a transfer was considered to be the most beneficial solution for all parties. AS Monaco is proud to be a party to one of the most significant transfers in football history."

The arrival of Rodriguez could open the door for Angel Di Maria to leave Real.

Coach Carlo Ancelotti had wanted to keep him but the Argentine winger is believed to feel under-valued at the club.

Alvaro Morata has left for Juventus and defensive midfielder Casemiro has joined Porto on a season-long loan.