Recruitment of maids could do with extra spit and polish 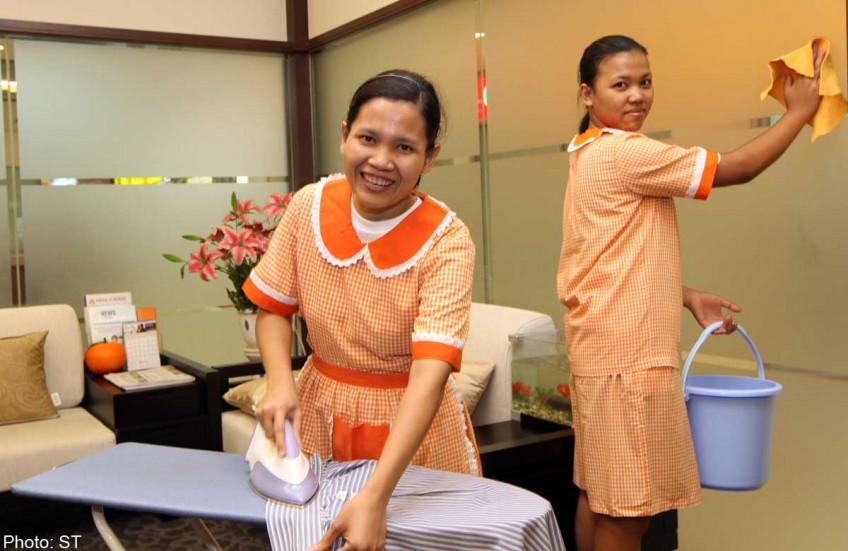 A maid agent told me he has been gripped with guilt for the past week after a news report ran on how domestic workers in Singapore are being "marketed" as commodities.

The story highlighted the apparent lack of respect for maids when they are "displayed" in agencies surrounded by "garish advertisements offering super promo rates".

He felt guilty for using such sales tactics. But he felt even more ashamed for not realising earlier how demeaning the marketing strategies are despite being in the business for 20 years.

His words struck a chord. It is easy to brush aside the Al-Jazeera story because agents have explanations for their way of doing business.

Contrary to the report, the maids were not on "display" but were there waiting to be interviewed by employers.

But despite these justifications, it cannot be denied that maids have little privacy when they sit behind see-through glass panels.

Neither does it look good when they are surrounded by banners promising "$1 fees" and "unlimited free replacement maids".

As a developed nation on the cusp of turning half a century next year, Singapore can, and should, do better in how it treats foreign domestic workers.

They are guest workers who play crucial roles in taking care of our homes, our children and our elderly.

First, appearance matters. It may be superficial, but the marketing strategies here must change.

Many agencies are located in glass-panelled shop units in shopping centres. It can be uncomfortable for the maids when passers-by peer at them.

Indonesian maid Siti who was interviewed at her agency in Bukit Timah Shopping Centre last week said: "Sometimes I feel a little shy when people stop and look at us."

One suggestion is to install opaque panels so that the women have more privacy. Agencies can also partition a private waiting area for the women.

Another way is for agents to put up resumes of the maids on their websites, a move which is gaining popularity. An example is www.netmaid.com.sg.

Employers can look at the resumes and indicate which worker they would like to interview.

Agents arrange for the meeting at a designated time so that the maids would not be waiting for days in the offices.

Second, and far more importantly, agents and employers must recognise that the maid trade of today is not simply a modernised slave trade of yesterday.

Why not move maids' recruitment here in the direction of regular job searches and placements, as seen in the labour market? Agents are like headhunters. If you won't put an aspiring relationship manager of a bank in a shop window, don't do it with a maid. Similarly, if you won't line up lawyers in a row in bright T-shirts, don't do it for maids too.

In short, professionalise the hiring of foreign domestic workers, adding a giant dollop of decency.

Now, many bosses hire a maid based on superficial reasons like her looks and how hardworking she appears to be after observing her for a few minutes at an agency.

It would be more useful to conduct a thorough interview to find out about her job experience and expectations in terms of workload and pay.

Indonesian Embassy counsellor Sukmo Yuwono told me many employers do not sit down with their maids to iron out expectations before hiring.

He has come across maids who were shocked to find out that they had to care for young children and pets when they stepped into their employers' homes as they were not told about these requirements previously.

A candid discussion about expectations and aspirations during the job interview is key to ensuring the workers stay happy, said human resource expert David Leong.

"Many workers don't last long because they realise the job is not what they signed up for," said Mr Leong, who recruits over 1,000 foreign workers every year.

However, some agents may be too jaded to put in the effort to facilitate in-depth discussions as they are probably disheartened by the poor retention rates for maids.

Manpower Ministry figures show that only 42 per cent of the maids placed by agencies between February 2011 and February last year stayed with the same employer for at least a year.

Such high turnover makes it even more important to ensure a good fit between bosses and maids.

Employers must come onboard to recognise that more professional recruitment is in their favour. They are likely to get a better maid who works longer. They must push agents to arrange for interviews and request that due diligence is done through referral letters from previous employers.

Better yet, call the maid's previous employer to find out how she fared.

It is time to improve how the recruitment of maids is conducted here. Instead of the bad taste left by the current demeaning ways, let's accord the trade the respect it deserves with resumes, referrals and rounds of interviews.