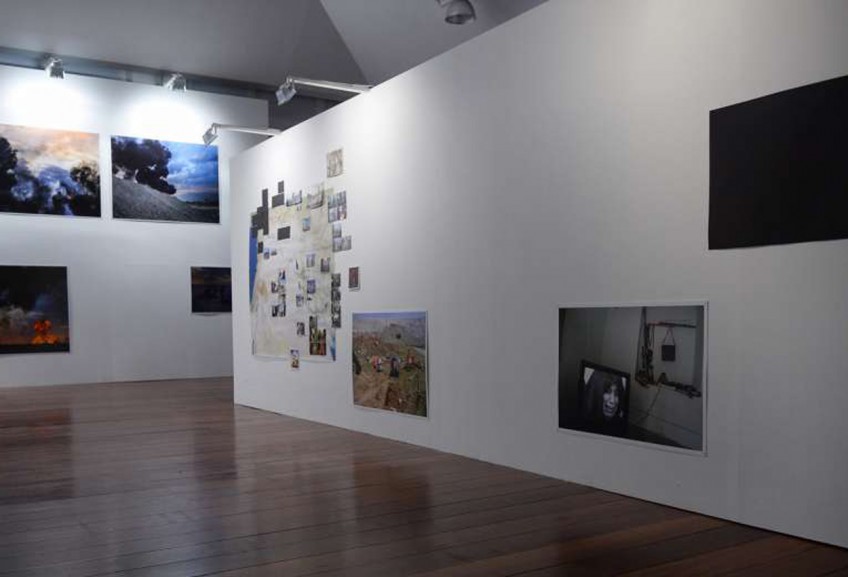 The wall panel (above) of Newsha Tavakolian’s exhibition where black cards replaced 15 pictures and one of the pictures, of a woman wearing red gloves, which is in the exhibition.
The Straits Times

Iranian photographer Newsha Tavakolian is "deeply disappointed" by the Media Development Authority's decision to disallow 15 of her photos depicting Kurdish female soldiers taking up arms against the Islamic State of Iraq and Syria (ISIS) for an exhibition here.

When her show, I Know Why The Rebel Sings, opened last Wednesday, black cards stood in for the missing photographs - a sight that greeted her when she arrived in Singapore on Tuesday.

The MDA had objected to the photos as they were of "members from a terrorist-linked organisation, who had committed acts of violence to further their cause".

Newsha, 35, put up her first comments on the incident on Facebook late that night, along with photos of the black cards at her exhibition.

"Omitting images from my exhibition cannot wipe the realities of today's world from people's minds," she wrote.

Art, documentary photography and journalism are meant to create understanding and insight - "even when we disagree with or fear those portrayed", she added.

"In Iran, Europe or Singapore, wherever in the world, I trust that those viewing my work are wise enough to interpret it for themselves, without the need of schoolmasters taking them by the hand, telling them what is wrong and what is right."

She noted that it is now easier than ever to access information.

The removed photographs were first published in an April issue of Time magazine last year, for a photo essay titled Meet The Women Taking The Battle To ISIS, and can still be viewed on Time's website.

Although MDA did not name the "terrorist-linked organisation", the women Newsha photographed were part of the YPJ, an all-woman offshoot of the Kurdistan Workers' Party. The party, which seeks to establish an independent Kurdish state in south-east Turkey, has carried out attacks on Turkey and the Turkish government, along with a number of Western countries, considers it a terrorist organisation.

MDA said in its statement last week: "Singapore takes a firm stand against extremism and will not allow photographs that undermine public order, national security and/or stability to be displayed."

Newsha is a nominee member of Magnum Photos who has shot for publications such as National Geographic.

I Know Why The Rebel Sings, a highlight of the Singapore International Festival of Arts' pre-festival programme, The O.P.E.N., will run at TheatreWorks' space at 72-13 Mohamed Sultan Road until July 9.

It offers a wide-ranging look at her work, from war reportage to intimate, artistic portraits of the people of Iran.

Admission to the exhibition is free for those with an O.P.E.N. pass, which offers admission to all pre- festival programmes for $45. Those without a pass can purchase a single-entry ticket at the door for $10.