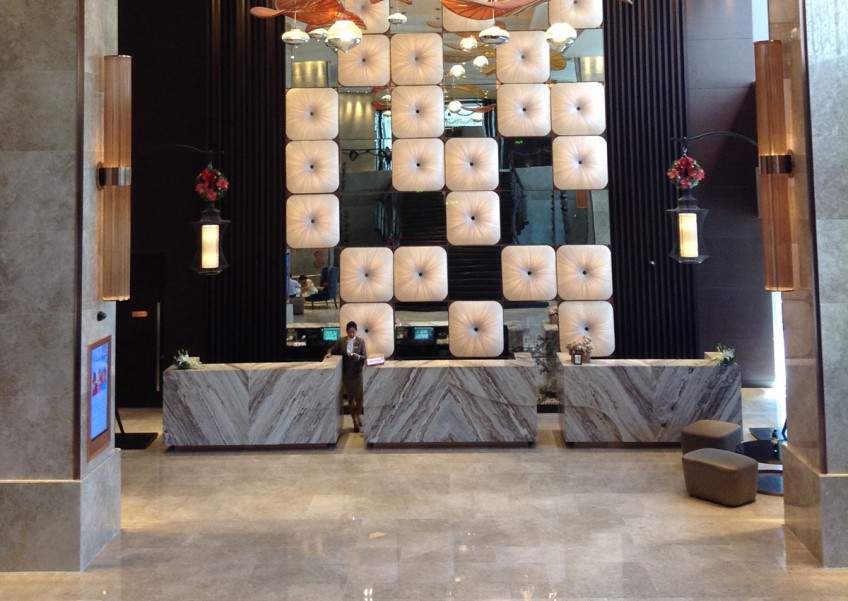 Not to put too fine a point on it, but Yangon is a city that, on paper at least, should not work. It's dusty. Cars, dirt tracks and exhaust fumes throw a fine layer of ashy grey over everything. The roads are potholed and clogged with traffic jams. The noise is a constant assault - packed little public buses with no air-conditioning vie with ancient, spluttering cars. Every so often, someone leans casually out of the window and spits out a lurid stream stained red by betel-nut. The infrastructure is antiquated. The city's 15 power stations cannot keep up with the demand, so blackouts are common.

There is something else, just below the surface, a steely resilience beneath the fine-boned posture of the gently smiling Myanmar. The word, incidentally, describes the country, the people and the language. There is an absolute resistance to any attempt to use "Myanmarese" or, worse, "Burmese" as an adjective.

You sense the strength and the will, tangentially, like a bending copse of bamboo that yields just enough but without breaking. And, of course, you remember the most famous proponent of this tensile core - the much loved Nobel Prize-winner and leader of the National League for Democracy, Aung San Suu Kyi, whose dignified 15-year house-arrest defined the country's larger struggle for a political voice.

Today, Yangon is the face of Myanmar's renaissance, an economic dragon in the making. Investment is pouring in. The biggest news to grip the capital in recent months has been the grand opening of the country's first KFC outlet. You get the sense that Starbucks and McDonald's can't be that far behind.

Singapore is an important investor. The first thing you see at the airport is a huge Ya Kun sign. Keppel Land Hospitality Management has been quietly investing in Myanmar for 20 years now. In addition to a property in Mandalay, it's just completed the fancy new Inya Wing to its five-star property, the Sedona Hotel Yangon. Designed by Forum Architects and furnished by Studio HBA and costing US$80 million, the slim-lined 29-storey tower adds 431 rooms bringing the hotel's capacity to almost 800 keys.

If it's not already clear, the outlook is bullish, much of it banking on first-adopter tourism of the kind experienced in Siem Reap and Bhutan over the past two decades. Last year, five million visitors arrived in Myanmar. The number is expected to reach 7.5 million by 2020.

You can't help but imagine how bewildering the pace and scale of these changes must be for people of Myanmar.

At the Sedona Hotel, a couple of floors above the Franck Muller watch boutique, a yearly membership to the gym costs US$3,600. This, in a country where the per capita earnings hover around the US$300-$500 mark and, already, the black market is skewing the value of the kyat, the local currency.

Across the road, at the newly opened Myanmar Plaza, Auld Lang Syne is piped through the stereo while fascinated locals peer at the displays of gorgonzola, French butter and sushi. This, in a country where traffic directions were switched from the British to the Continental model because an astrologer apparently advised the wife of an important general that it was good luck for her to drive on the right side of the road. Motorbikes were also banned after one was involved in an accident with another general.

In a way, these incongruities are all part of why, in spite of it all, somehow, Yangon is able to work its magic.

In the grand piazza of the massive Shwedagon temple complex (there's free WiFi), chattering and smiling Buddhist devotees record their circular path around the ancient golden spires on new mobile phones. Every day, small busloads disgorge tourists in front of Aung San Suu Kyi's high-walled home for a photo-op before hightailing it to the 2,000-plus shops of the Bogyoke Aung San Market for rubies, jade, sapphires, gorgeous many-coloured textiles, and finely wrought lacquerware.

And in the crumbling piles around Independence Monument and Pen Soe Dan Road, Yangon's British colonial past is still writ large in the facades and neat street grids even if the streetscape is now dotted with noodle vendors, second-hand booksellers, souvenir and T-shirt hawkers, and betel-nut stands, the latter easily spotted by their foot-high stacks of palm-sized leaves.

At the centre of it all is the Myanmar, elegantly neat and compact in their traditional longyi, and expertly balancing a complex, often tumultuous past that dates back to the 6th century with an easy eye on the future. Their friendliness and openness is disarming, as is their precise, formal English and sophisticated humour, especially as we persist in finding an adjective for the local language. "People in France speak French. People in England speak English. People in Myanmar speak…?"

In the ensuing burst of good-natured laughter, you catch a glimpse of a future marked by nimble diplomacy and assured confidence. And, much to your surprise, you also find promising yourself that you'll be back.

This article was first published on Jan 9, 2016.
Get The Business Times for more stories.