A 'retro' approach to the 21st century 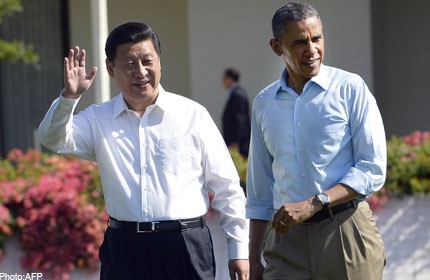 It's a media cliche which never seems to fade: the first United States-China summit attended by every new generation of Chinese or American presidents is always compared with the original 1972 encounter between Mao Zedong and Richard Nixon, that epic event which transformed the world.

And so it proved with Chinese President Xi Jinping's recent first meeting with President Barack Obama: US newspapers invariably accompanied their reports with a reprint of that iconic sepia-toned photograph of Mao and Nixon seated in a book-crammed room, an oversized spittoon at their feet.

Predictably, the Xi-Obama summit was not in the Mao-Nixon league.

Unlike their famous predecessors who agreed on the broad vision but not on practicalities, today's leaders saw eye to eye on minor matters while amiably agreeing to disagree on the major ones.

Still, the latest US-China summit may end up being regarded as historic, for it allowed China to start unveiling its new global strategic thinking, one which Mr Xi likes to call "a new type of great power relationship".

Unlike his predecessors, who devoted their first years to consolidating their power at home and choreographing the tiniest protocol details before their first meeting with a US president, Mr Xi threw protocol to the wind in return for getting a summit with Mr Obama as quickly as possible.

This rush should not be interpreted to mean Mr Xi approached the summit as a supplicant.

Rather, it is an indication that China's new President has a very different view about the utility of such encounters.

Previous Chinese leaders treated their meetings with US presidents as the supreme badge of honour, the ultimate confirmation of theirs - and China's - rising global standing.

But as a "princeling" accustomed to wielding power and now, ruling a country whose importance is no longer in question, Mr Xi doesn't need such badges of honour; what he wants instead is a durable, personal relationship with the US leader.

As seen from Beijing, this makes perfect sense not only because, unlike the famously wooden former president Hu Jintao, President Xi is capable of holding his own in freewheeling interactions with foreign leaders but also because a personal bond between the Chinese and US presidents is much more in tune with the way China does business.

Previous US efforts to institutionalise links between Washington and Beijing through the creation of various cooperation "taskforces" or "hotlines" - designed to be activated in times of crises - have failed, largely because China's centralised political system is virtually incapable of delegating the necessary decision-making powers to such activities.

But a personal relationship between the presidents of the world's most powerful nations would cut through this entire bureaucratic forest, providing the necessary crisis-management tool.

Mr Xi does not need to transform Mr Obama into his best buddy; all he needs is to persuade the US President of the centrality of their personal relationship.

This chumminess is probably just a prelude for another, more audacious Chinese push: that of probing the extent of the US' enduring commitment to Asian security.

The effort takes two forms: a Chinese warning that, if the US increases its military presence around China, it should not be surprised if China does the same to the US, coupled with the dangling of some strategic "carrots" should Washington decide to diminish its Asian commitments.

Before landing on US soil for the recent summit, Mr Xi demonstratively paid visits to Mexico and the Caribbean, nations where China has a small economic or political footprint, and a slim chance of developing either.

The visits were obviously designed to remind Mr Obama that, if the US proceeds with its "pivot" to Asia, China can perform a similar pivot into Washington's own backyard.

A similar purpose was achieved by the announcement from Chinese military officials attending the recent Shangri La Dialogue in Singapore that, having spent decades strenuously opposing the passage of US Navy ships through China's maritime exclusive economic zones, Chinese navy ships are now engaged in precisely the same behaviour inside the US' own exclusive economic zones' waters.

But the potential strategic carrots which Beijing is supposedly dangling for Washington are also coming to the fore.

In a wave of commentaries released soon after the Xi-Obama gathering ended, Chinese experts claimed that US negotiators secretly mooted during the summit the possibility of "limiting" US guarantees to allies such as Japan, in return for China's cooperation in preventing North Korea from acquiring nuclear weapons.

All of this is sheer nonsense: no such US offer was made either before, during or after the summit.

Still, there are a number of reasons why such false rumours still need to command attention.

The first is that although the rumours were not sanctioned by the Chinese government, many were carried on government-approved media platforms, including the People's Daily.

Second, the idea that China could "sacrifice" its North Korean satellite in return for serious US concessions over Taiwan or Japan has been the source of constant speculation in Beijing for years; the debate has a long pedigree.

But the most important reason as to why the rumour of a supposed US-Chinese deal over the heads of the other Asian nations deserves attention is that the new generation of Chinese leaders are attempting something similar in Europe, where Beijing has moved to establish a close relationship with Germany over the heads of other European nations.

It is largely to render the entire European Union impotent in its trade disputes with China. The tactic is working: Germany blocked a series of anti-dumping moves which the EU was contemplating.

Still, as any Chinese strategic planner worth his salt must know, the US is in no position to seriously contemplate such barter deals in Asia, if only because these would risk a catastrophic collapse in the US' credibility throughout the region.

More thoughtful Chinese strategic experts would also grudgingly admit that, far from destabilising, US security guarantees to countries such as South Korea or Japan are the biggest pillars for stability.

Without them, both Japan and South Korea would rush to acquire their own nuclear and other military capabilities, and China would be the biggest victim of this process. So why continue peddling such myths?

One possible explanation is that, by raising the possibility of a secret strategic deal between Washington and Beijing, the Chinese can rattle the Japanese and other US allies in Asia, at little cost.

Such rumours also accord with a wider strategic narrative of a US now in terminal decline, ruled by a President supposedly intent on cutting overseas entanglements.

So these rumours appear real even if they are not, and may encourage some of the smaller or weaker Asian countries such as the Philippines into concluding that there is no substitute to a strategic accommodation with China, on Beijing's terms.

Either way, it would be wrong to assume Mr Xi's theory about a "a new type of great power relationship" is fully articulated. In all probability, it is partly a slogan in search of a meaning and partly a set of ideas which are yet to coagulate into a coherent concept.

Contrary to its title, Mr Xi's strategy is not exactly "new": dividing regions into spheres of influence is one of history's oldest tricks. And it is very much about great powers. In short, a very "retro" 19th century approach to the 21st century.