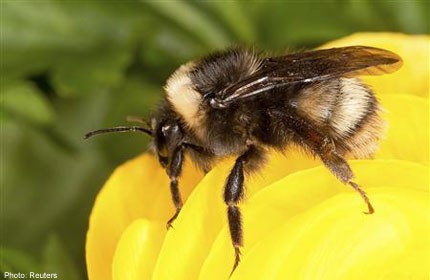 OLYMPIA, Washington - A North American bumblebee species that all but vanished from about half of its natural range has re-emerged in Washington state, delighting scientists who voiced optimism the insect might eventually make a recovery in the Pacific Northwest.

Entomologists and bee enthusiasts in recent weeks have photographed several specimens of the long-absent western bumblebee - known to scientists as Bombus occidentalis - buzzing among flower blossoms in a suburban park north of Seattle.

"It's a pretty big deal," said Rich Hatfield, a biologist for the Oregon-based Xerces Society for Invertebrate Conservation, which documents and reports such findings.

"It gives us hope that we can do some conservation work, and perhaps the species has a chance at repopulating its range," he told Reuters this week.

The multiple sightings, including observations of several queens, are evidence of western bumblebee colonies in the area, although it hardly proves the species has returned in force and or that it will thrive in the region, Hatfield said.

Last year, a single western bumblebee, recognised by its distinctive white-banded bottom, was discovered by an insect enthusiast in her mother's garden in suburban Brier, Washington. It was the first sighting in Washington state west of the Cascades in well over a decade.

Her sighting was confirmed earlier this month as more than an isolated incident when Will Peterman, 42, a freelance writer-photographer and self-described "bee nerd" from Seattle, ventured into a park in Brier to capture his own shots of Bombus occidentalis foraging in blackberry bushes for nectar and pollen.

He returned on Sunday with a group of University of Washington entomologists to conduct a more thorough canvass of the park and surrounding areas. While the group failed to locate a nest - hives are dwellings for domesticated honeybees - they identified and photographed at least three queens.

Hatfield said the queen bees observed in the park would normally be expected to go into hibernation soon, then produce offspring next year.

The mood among the scientists accompanying him was "almost giddy," Peterman said. "This is grounds for optimism in a story that has been really bleak."

CAUSE OF POPULATION CRASH UNCLEAR

Bombus occidentalis is one of four wild North American bumblebee species whose populations began to plummet two decades ago, while honeybees - commercially bred for the most part - have undergone less precipitous declines, Hatfield said.

Scientists have cited a number of likely factors for bumblebee declines, including parasites, pesticides and habitat fragmentation.

Until the mid-1990s, the western bumblebee was among the most common bees in the Western United States and Canada, where it was valued as a key pollinator for tomatoes and cranberries.

It has since virtually disappeared from about half its historic range, a vast stretch of the West Coast from central California to southern British Columbia, although its population remains relatively robust in the Mountain West.

Scientists are not certain what caused North American bumblebee populations to crash.

But a leading theory advanced by Robbin Thorp, a retired entomology professor at the University of California at Davis, points to efforts to commercially cultivate colonies of western bumblebees in Europe starting in the mid-1990s.

American-bred western queens shipped to Europe likely were exposed there to a fungus that might have spread and devastated wild North American bumblebee populations when infected European-bred bees were transported back to the United States, Hatfield said.

The discovery of the bees near Seattle could mean a population resistant to the fungus has emerged, he said. The bees may also be part of a population never exposed to the fungus or that originated in a distant colony to the east.