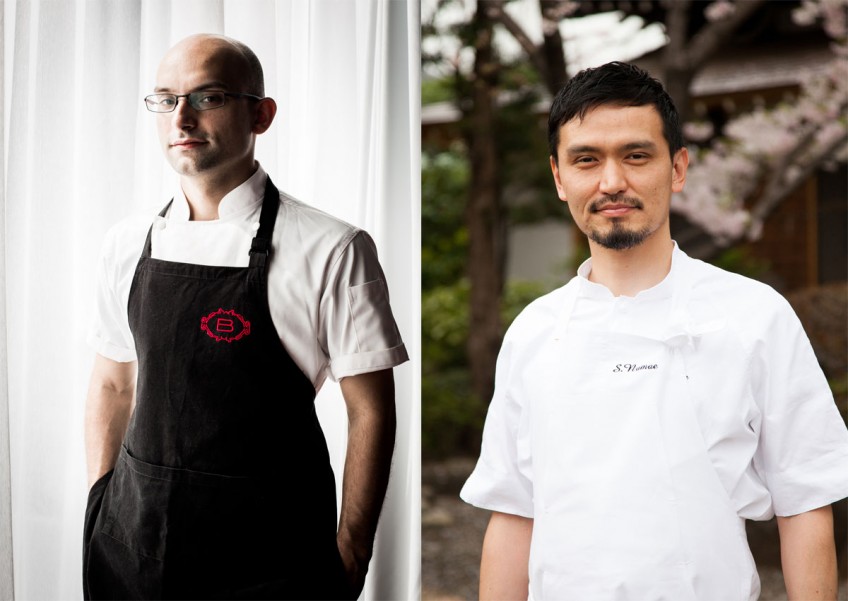 It is a reunion gourmands here should not miss. Chef-patron Shinobu Namae of two-Michelin- starred L'Effervescence in Tokyo will be in Singapore to cook two dinners with Bacchanalia's head chef Ivan Brehm on Jan 17 and 18.

Both chefs are alumni of the acclaimed three-Michelin-starred restaurant The Fat Duck in Bray, England, where they met in 2008.

Their collaboration in Singapore marks the first time Namae will cook here. He has been here previously for the award ceremonies of the Asia's 50 Best Restaurants. L'Effervescence is currently No. 12 on the list.

The dynamic duo will whip up seven-course tasting menus, including snacks and pre-dessert.

Dishes from Namae, 42, include chawanmushi with Taraba crab meat, black truffle sauce and maitake mushrooms; and Hokkaido abalone made into a rice ball with wasabi-nori, sesame and pepper oil made from the Sichuan pepper that grows on the slopes of the Tibetan Plateau.

Namae says: "It will be great for us to work together again, show our skills and have fun."

Calling Namae a "rare breed of chef", Brehm says: "He is driven by internal convictions as much as the desire to serve guests. It's exciting to share a kitchen with someone so committed to issues of sustainability and tradition while still striving for creativity and originality in his food".

Namae, who is born in Yokohama, is a political science graduate who ditched his plans to be a journalist for the kitchen. In his 20s, he worked in various kitchens to earn money and dreamt of specialising in Italian cuisine.

His turning point came when he stumbled upon Bras, a cookbook by acclaimed French chef Michel Bras, which steered him towards training in French cooking instead.

Motivated by Bras' culinary philosophies, Namae jumped at the opportunity to work at Michel Bras Toya Japon in Hokkaido.

After five years, he went to work at The Fat Duck from 2008 to 2009, before opening L'Effervescence in 2010. L'Effervescence was awarded its second Michelin star earlier this month.

On receiving another star, Namae says: "There is no added pressure, as we work every day not looking for stars. I'm proud we received a second star, it is a big reward.

"We are constantly changing dishes and experimenting. There is no on or off switch as a chef. I'm always thinking about food, whether I'm in or out of the kitchen."

This article was first published on Dec 28, 2015.
Get a copy of The Straits Times or go to straitstimes.com for more stories.