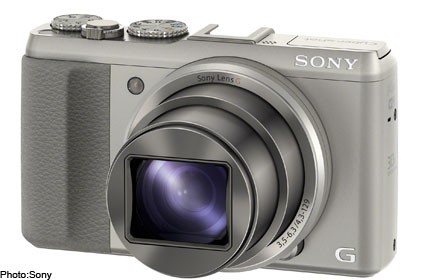 You are lazing on the beach with the sun setting swiftly.

You want to take a wide landscape shot of this beautiful sunset, but also in the next moment, zoom in on that beautiful seagull gliding over the ocean. The Sony Cyber-shot DSC-HX50V may be what you need.

Despite being only 38mm thick - a stack of five iPhone 5s - and weighing a whisker more than 270g, this 20.4-megapixel camera has a whopping 30x optical zoom lens that translates from a wide-angle 24mm to a supertelephoto 720mm focal length.

The camera might be a tight fit for a shirt pocket, but it will do just fine in the side pocket of your cargo pants.

It has built-in Global Positioning System and Wi-Fi so you will be able to know where you took those pictures.

Pictures can be transferred from the HX50V to your smartphone via Wi-Fi using the Sony PlayMemories Mobile app. The app can also be used to remotely control the camera.

The button layout is well thought out, with all the controls easily accessible from a Mode dial and an exposure compensation dial on top.

On the camera's back, all the buttons are on the right, including a a dedicated video button and a useful clickable wheel dial.

On the downside, in Manual mode, you have to press the Set button to toggle between aperture and shutter speed before turning the wheel dial to change the setting.

The HX50V's operation is not particularly fast. It takes some 2.4 seconds to start up and 2.8sec to shut down.

In dim lighting, the AF takes about 2sec to lock on to a focus with the help of AF assist light. The AF becomes slightly slower when you move into the telephoto range - around 400 to 720mm.

Using an SD card rated at 25MB per second, the HX50V can shoot 10 frames in 1.2sec before the buffer runs out.

Image quality is not bad with nice vivid colours and accurate white balance. But it is not as crisp as you might expect from a Sony camera.

In addition, noise performance is rather disappointing. At ISO 400, you start to see noise artefacts with loss of details. ISO 800 is the absolute maximum I would recommend.

On the other hand, video quality is much better, with sharper imagery and fast AF. You cannot hear the zooming and AF of the lens during video recording, but it does pick up a fair amount of wind and ambient audio.

Battery life is quite good at around 400 frames on a full charge.

If you are travelling, the Cyber-shot DSC-HX50V is the kind of camera you want to pack. Lightweight and compact, it packs a superzoom lens for you to capture any picture you like.