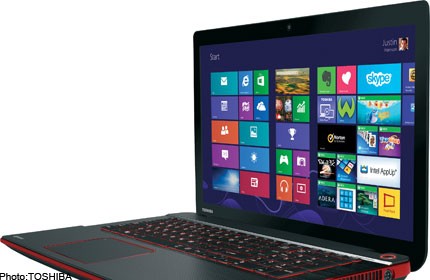 Toshiba's Qosmio series of gaming laptops has received a fresh coat of paint, although the upgrades are mostly under the hood.

Aside from some minor cosmetic changes, the new Qosmio X70 has a similar chassis design as its predecessor, the X870.

Both weigh about 3.5kg, which is lightweight for a 17.3-inch gaming laptop.

The lid and interior have a grey textured finish that might be described as dull-looking if not for the red chrome finish along the sides.

The design could be improved - a large air vent on the right expelled warm air towards my hand when I used the laptop with an external mouse. Toshiba should consider placing the exhaust at the back, as some of its rivals have done.

The glossy 1,920 x 1,080-pixel screen on the Qosmio is not of the in-plane switching (IPS) variety found on premium mobile devices. Although the viewing angles from the sides were fairly decent, the screen becomes washed out if you tilt it backwards or forward.

The screen does not support touch, despite being preloaded with the touch-centric Windows 8 operating system.

Toshiba has finally included a 256GB solid-state drive (SSD) on the X70, which is a significant improvement over the hybrid hard drive found in the previous version. Supplementing the SSD is a secondary 1TB hard drive.

The X70 is also a multimedia powerhouse, equipped with a Blu-ray writer and four built-in Harman Kardon speakers.

These speakers can be quite loud and crisp, although I found the bass lacking.

The Qosmio X70 has 16GB of RAM compared with 8GB on the base X17s configuration.

Graphics performance on the Qosmio - Nvidia's GeForce GTX 770M - is clearly second best to the X17s.

In Bioshock Infinite, the X70 produced about 30 frames per second (fps) at the highest possible settings compared with 44fps on the Aftershock. Nevertheless, it is beefy enough to play most games in full high-definition.

The laptop lasted merely 40 minutes while running a game, although it does manage about 21/2 hours of video playback.

At $2,999, the X70 is more affordable than a similar set-up from established gaming vendor Alienware. But Aftershock's X17s is a better deal at $3,094 and it is customisable.

The Qosmio X70 is a decent gaming laptop, but lacks the custom options offered by its competitors.