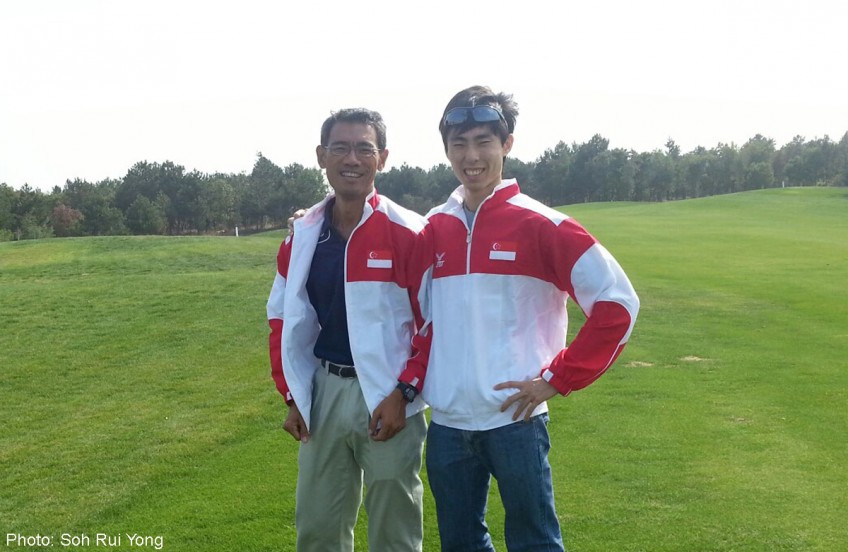 Soh Rui Yong (right) with Steven Quek when the runner was competing at the 2012 World Half Marathon Championships. Soh, the 10,000m record holder, is second fastest in the marathon.

He has helped nurture two of Singapore's best long-distance runners, and brought glory this year to the school which hired him.

So when news spread that Raffles Institution (RI) cross-country coach Steven Quek's contract was not renewed for the new year, it led to an online petition calling for his reinstatement.

Almost 400 names have already been garnered by the online petition, after student-athletes were informed by Quek over the weekend during training.

It is believed that one of the reasons behind the decision was because of budget constraints.

Quek - who took up the job in 2010 - led the RI cross-country team to their first clean sweep of the A, B and C Division boys' team titles, as well as the A girls' title, in March.

One of his most famous proteges is Mok Ying Ren, Singapore's 2013 SEA Games marathon champion, who was under his tutelage when he was a student at the then-Raffles Junior College in 2005 and 2006.

Another running talent nurtured by Quek is Soh Rui Yong, the national record holder over 10,000m who this month clocked the second-fastest marathon timing by a Singaporean.

The RI alumnus started the petition group to rally support for Quek. Soh, now a business administration undergraduate at the University of Oregon, told The Straits Times: "I want to try and help the school understand that Mr Quek works round the clock to develop champions on and off the track.

"If RI lets him go, where do we find a replacement?"

He credits his former coach for being instrumental in guiding him to five Schools National titles while he represented RI, as well as an ASEAN Schools 2,000m steeplechase gold medal in 2009.

Prior to working under Quek, he had no individual titles.

"He is a coach, an educator, a disciplinarian, a mentor, a role model and a father figure all rolled into one," added Soh, 23, who has been receiving personal testimonials from Quek's former and current charges in support of their coach.

"When 30-year-old men with kids are jumping out in support of their old coach, you know the extent of influence Mr Quek has had on his students."

Added undergraduate Jolene Quek, 19, who was the Schools National 3,000m champion in 2013: "Mr Quek is very dedicated to RI and treats us like his children. He really understands what each athlete needs and how to tailor his training regimen to him or her."

Quek declined to comment on the issue when contacted. RI was unable to respond to queries, citing that discussions are ongoing.

Said Soh: "Students learn just as much on the sporting arena as we do in the classroom, (and) in some cases even more so.

"Mr Quek continues to train Raffles alumni even after they graduate free of charge during his own spare time. He is a person who truly gains satisfaction from watching his athletes grow."