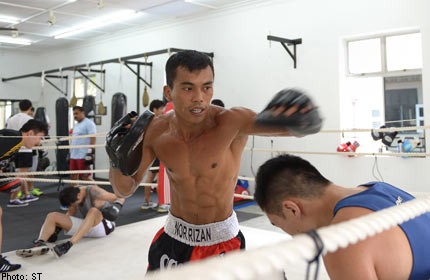 Mohamad Nor Rizan (left) showing a student how to duck under punches at the Fight Pro-Motion gym.

SINGAPORE - Boxing stories did not use to end all that well.

History is littered with examples of washed-up pugilists sliding quickly from the spit bucket to skid row when the lights faded on their blood-splattered careers.

Thankfully, times have changed. The growth in popularity of recreational combat sports means fighters can keep punching for pay, even when their time in the ring is over.

Some even balance their fistic careers with a lucrative sideline in coaching at the same time.

Boxer Mohamad Nor Rizan is one fighter making the most of the current boom.

The 35-year-old pugilist has thrown his weight behind a new gym on Serangoon Road, hoping it will inject some life into the twilight of his stop-start career.

He is also teaching young hopefuls the skills he has garnered from 13 years in the pain game.

"Training people keeps me fresh and helps me to go over the basics again," said Rizan, who works as the head boxing coach at the Fight Pro-Motion (FPM) gym, which is located above a coffee shop on the corner of Beatty Road.

"I still want to box. Training others means I can stay in shape and also pick up a few things myself.

"Watching people develop is one of the best things about being a trainer. Even if they don't ever want to fight, they can still get so much out of learning the skills."

The super-bantamweight, who works as a Certis fitness trainer at Pulau Tekong's Basic Military Training Centre during the day, said he wants to help youngsters reap the same rewards from the sport as him.

"I used to be rowdy but boxing transformed my character," said the Hougang resident.

"It gave me discipline and showed me that if I dedicated myself to something, I could achieve my goals. I hope to pass that on to other people.

"I got a black eye in my first amateur fight in 2000, but I never wanted to give up. It just made me want to try to get better."

Rizan, who earns around $1,500 per fight, is happy to train those who want to get in the ring for real or fitness enthusiasts looking for a workout among the punch bags and speed balls.

"Some people think we are just hitting each other, but there really is a science to it," he said.

"It's a test physically and mentally and also the kind of challenge that you don't get in other sports."

FPM gym manager Willip Ho - who is one of the investors who has ploughed $50,000 into the new venture - said it was imperative to get someone with Rizan's background on board.

"Someone as passionate as him has so much to offer," said the 31-year-old interior designer.

"In order to grow, Mohamad Nor needs to fight. In order to fight, he needs a base to train. He is the man to develop local talent under his guidance."

Employing current or former fighters is common across other gyms such as Juggernaut, Impact, Fight G or Evolve.

FPM member Casper Yap said he joined this particular gym because of Rizan's track record, which last saw him box at Marina Bay Sands in November.

"I wanted to be trained by someone who has boxed professionally because they can share their insight and experiences," said the 25-year-old product designer.

"That is more valuable than just learning lessons or training with an instructor who hasn't been there and done it himself."